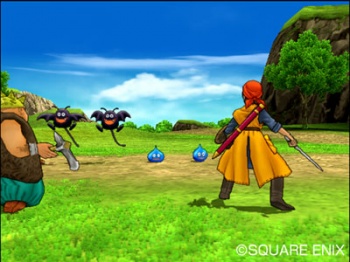 Despite Square Enix’s silence on Dragon Quest X, the tenth entry in the popular JRPG series will remain on the Wii.

Since the announcement that Dragon Quest X would be coming to the Wii back in December 2008, Square Enix has been mum on any sort of further details. The Wii’s sales are declining and it’s starting to show its age, prompting fans to wonder if Square Enix would choose a new platform for the mega-popular Japanese RPG. According to a recent interview with Dragon Quest creator Yuji Horii, Dragon Quest X is still coming to the Wii and development is going well.

In a recent issue of Nintendo Power, Horii confirmed: “The next Dragon Quest game, Dragon Quest X, will actually be released on Wii. I feel that some users will want to play Dragon Quest on the big screen, which is why we are working toward releasing it on Wii.” More handheld Dragon Quest games, such as the Nintendo DS’s Dragon Quest IX, haven’t been ruled out, but Square Enix is looking at platform on a “case-by-case basis.”

Further, Horii revealed that “development is going well” on Dragon Quest X, and said his team is working on the “last parts of the game.” Square Enix is taking into consideration that fans have been requesting another title in the style of Dragon Quest VIII, released on the PlayStation 2 in 2004. The company should be able to announce more details by the end of 2011.

The Wii has gotten a bit of a reputation as the weaker sibling of the current generation, but it’s in a huge number of households and is probably the least expensive console to develop for. If Square Enix wants Dragon Quest X on a television set, the Wii is still the best choice, and it’s not as if the series has ever needed a large amount of horsepower to be successful. Dragon Quest IX sold more than 2 million copies in Japan in just two days.

If there’s a secret Wii 2 floating around Nintendo HQ at the moment, Nintendo would no doubt love Dragon Quest X to be one of the system’s early titles. However, we may not be ready for a Wii 2 just yet, so for now fans should expect to get their JRPG fix on current Wii models when Dragon Quest X eventually hits the streets.

The Week in Review: Tiger Blooded Warlocks and Ice Wraiths