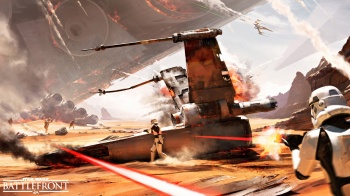 One of the biggest criticisms of Star Wars: Battlefront was the lack of a proper singleplayer campaign – reportedly cut so that the game could launch ahead of Episode VII. DICE is already working on the game’s sequel, due out some time this year, and has promised us that this time around we will get a campaign, and rather than just being stuck in Battlefront‘s “classic” era, this one will span multiple generations of the Star Wars universe.

“Our next Star Wars: Battlefront will be taking players into more locations, and allowing them to play with more heroes and characters across multiple Star Wars eras,” said the official EA Star Wars Twitter account. “There will be new ways to play, including an all-new singleplayer campaign, and much much more that we are excited to share with our players in the months ahead.”

The “multiple eras” comment does seem to suggest that the game will span across classic, prequel, and the new movies, and maybe if we’re lucky even further beyond. The addition of a proper singlerplayer campaign should appease a lot of fans, including John “Finn” Boyegna himself, who lamented its absence in a Tweet last year.

Nintendo “Studying” VR – May Add it To Switch if Tech Improves