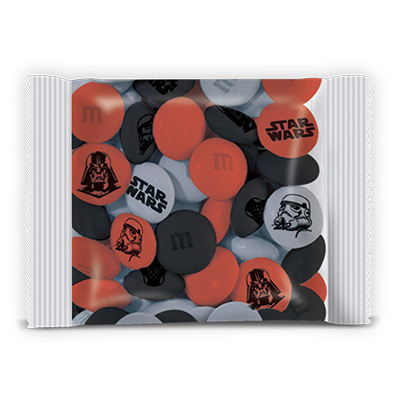 For as long as I can remember I’ve been a fan of Star Wars. It’s a franchise so deeply ingrained in my experience that I simply can’t imagine my life without it. That being the case, as my daughter’s begun to grow older and establish her own tastes, I’ll admit to perhaps looking for ways to subtly instill a similar love of lightsabers and X-Wings in her. Don’t get me wrong. If she someday decides that she wants to deck her room out in neon pink and play with nothing but Barbies, I’ll support that. I just might have to custom order some Barbie-sized lightsabers to go along with them.

Thankfully, Lucasfilm and the Mars candy company will soon be giving me a new weapon that I can use to help brainwash my child in the ways of the Force: Star Wars M&Ms. As everyone’s favorite Sith Lord might say, “Don’t underestimate the power of chocolate.”

The special edition candies, which are being released to celebrate Star Wars Day next month, will feature a variety of designs and colors based (from what we’ve seen any ways) primarily on the original trilogy. These will include M&Ms adorned with images of Darth Vader, Yoda, R2-D2 and C-3PO and, of course, everyone’s favorite cannon fodder the Imperial Stormtrooper.

Star Wars-themed M&M dispensers will also be sold featuring Darth Vader, Luke Skywalker, Darth Maul and a Clone Trooper. The special M&Ms themselves will be sold in a variety of quantities and containers, all of which are available to order now. Suffice it to say I intend to stock up. It’s going to take several years of exploiting my daughter’s sweet tooth to turn her to the Dark Side.