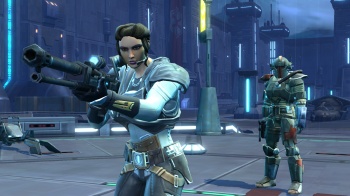 TOR will offer both subscription and free-to-play models this fall.

Last September, one of EA’s competitors predicted that Star Wars: The Old Republic would be the last major subscription-based MMO. As it turns out, he may have been only half-right. While the game performed well right out of the gate, a changing marketplace has had EA considering a transition to free-to-play for a while now. This fall, TOR‘s mandatory subscription fees will vanish like a StealthX and allow players to either maintain their subscriptions for full access or purchase piecemeal customizations instead.

A handy chart outlines exactly how TOR will change come autumn. While free players will have access to each class’s full storyline all the way up to Level 50, options such as race, warzones (PVP arenas), flashpoints (group dungeons), and space missions will be restricted – although not unavailable – for them. Additionally, a new feature called “The Cartel Market” will allow players to purchase vanity and convenience items through “Cartel Coins,” which will be available in exchange for real money. According to Matthew Bromberg, BioWare Austin’s general manager, “Players want flexibility and choice. The subscription-only model presented a major barrier for a lot of people who wanted to become part of The Old Republic universe.”

Even though the game is going free-to-play sooner rather than later, EA is still offering players some incentives to get on the subscription bandwagon before that happens. Current subscribers have the opportunity to earn an embarrassment of riches in Cartel Coins, plus a few other in-game goodies.

When the freemium transition takes place, subscribers will still have considerable benefits over their non-paying brethren. On the other hand, playing through a complete TOR storyline without having to drop $15 a month on it could be the perfect way to hook players who balk at subscription fees but don’t mind microtransactions. Whether this move will bring back some of TOR‘s lost subscribers or consign it to the abyssal maw of the Sarlacc, though, only the Force can tell.