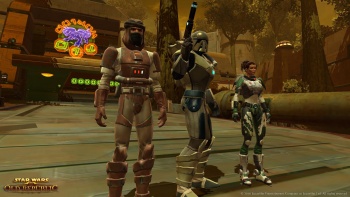 Electronic Arts has been around for nearly 20 years, and with revenue in the billions is one of the world’s largest videogame developers and publishers. However, the company’s biggest game is still in the works, as it’s has come to light that BioWare MMORPG Star Wars: The Old Republic is EA’s most expensive project of all time.

EA Chief Financial Officer Eric Brown gave an indication that this was the case back around the time of GDC 2010, but reiterated the claim recently to Gamasutra. “It is the largest R&D project EA has ever undertaken in terms of total dollars that we expect to spend bringing the title to market,” he said of The Old Republic.

Star Wars: The Old Republic is an MMORPG set thousands of years before the original trilogy of Star Wars movies, but hundreds of years after BioWare and Obsidian’s Star Wars: Knights of the Old Republic single-player RPGs. EA appears to be aligning it to seriously compete with World of Warcraft, or to at least pull in a similarly successful subscriber base. World of Warcraft currently has 11.5 million subscribers and is expected to grow later this year.

Brown admits that the most popular MMOGs are those based in fantasy universes, but doesn’t think The Old Republic has a disadvantage there. “Star Wars is analogous to that — instead of the swords, you have the lightsabers; instead of the knights you have the Jedi — we think it’s a fiction that does very well, we think it’s a fiction that spans the decades,” he believes. “We think is has a very broad appeal.”

If anyone can pull in 10 million subscribers, EA knows it’d be BioWare, and the likely tens of millions of dollars minimum EA is putting into The Old Republic seem to reflect that. EA wants a World of Warcraft of its own, but thankfully realizes at this point in time that a project has to be funded and developed correctly for that to even become a remote possibility. The Old Republic will be given all the time it needs, with Brown stating: “We’re not expecting it to ship in fiscal 2010, nor have we given a specific ship date thereafter. We’re intentionally being nonspecific on the ship date.”

It’ll be done “when it’s done?” Where have I heard that before?