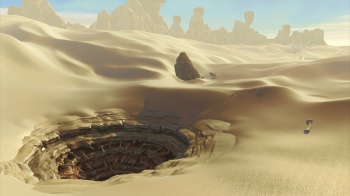 Certain MMOs like the upcoming Salem punish players with death penalties that are as harsh as the swamps of Dagobah. BioWare’s Star Wars: The Old Republic will not be one of those. Old Republic combat designer Damion Schubert recently took to the BioWare forums to explain why the game won’t have an overly harsh death penalty, but said it won’t be a “cakewalk” either.

In a forum topic asking BioWare to make death “mean something” in The Old Republic, Schubert wrote that he agrees death should have a “sting.” However, the sting should be more like that of a bumblebee, than that of a box jellyfish.

BioWare’s philosophy for The Old Republic is that harsh death penalties can ruin a game. They can lead to players that only grind through the game on weaker enemies, and that don’t take risks on new character builds. They can make it tough for newer players to learn a game’s ins and outs, with experienced players never willing to group with them for fear of losing to a boss. If an MMO chooses to make equipment vulnerable after a death, you might as well never give that equipment out, because Schubert doesn’t think most players would risk bringing it along.

Schubert emphasizes that BioWare does not want The Old Republic to be soft on those that die, but isn’t planning to remove a limb every time a player accidentally walks backwards into a Sarlaac pit. I’m the type of gamer that can appreciate both kinds of systems, and with the mainstream appeal that Old Republic will likely have, I think it’s smart to implement a death system into the MMO that won’t have players turning to the dark side out of anger. I’m expecting something similar to World of Warcraft where players simply have to get back to their corpses, but perhaps molded into a more Star Wars-like system.