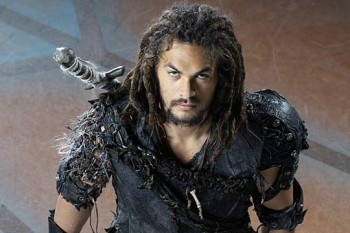 Jason Momoa, best known as the big, brooding Ronon Dex on Stargate: Atlantis, has been chosen to star in the title role of Conan, the upcoming remake of Robert E. Howard’s fantasy classic.

Ronon is Conan: For some people, those three words will inspire a debate that will rage for years. For those who don’t run in that particular crowd, let me explain: Since 2005, Momoa has been a regular on the sci-fi television series Stargate: Atlantis, where he plays Ronon Dex, a smoldering slab of muscle who beats the crap out of everything he sees and makes the ladies swoon with his burning, dark-eyed gaze. He’s basically a reverse Seven of Nine and based on the feedback I’ve heard from women who actually watch the show, he’s very effective in the role.

But now he’s upping his game: According to a Deadline Hollywood report, Momoa has been selected as the new Conan for the upcoming “rebirth” of the famous fantasy franchise. Momoa got the role by filming a few “trial scenes” in which he waved around a sword and did his best Arnold Schwarzenegger impression.

So what’s the debate? Momoa’s a big boy but he’s no Schwarzenegger, the “Austrian Oak” who set the gold standard for sword-wielding Cimmerians back in 1982. And physical appearance may be the least of his concerns; Ronon is a great supporting character on Atlantis but will Momoa have the screen presence to avoid being completely overshadowed by his predecessor, who despite being a less-than-accomplished actor managed to make himself into a modern legend of film? Or will his syndicated sex appeal be enough to turn the rowdy, beer-and-buddies flick from the 80s into something with legitimate appeal to female audiences? No matter how you look at it, these are big shoes to fill.

(On the other hand, if they bring back James Earl Jones as Thulsa Doom, I am so there.)

Rebellion Says “No Justification” for DLC Already on Discs