Despite being a passionate gamer for decades, it was much more recent that I started developing a more refined taste in hardware. I was a console peasant for most of my gaming career, and I used the generic in-the-box Dell mouse and keyboard until just a couple years ago. My nicest headphones were some shitty knock-off earbuds, and my best mic was the one that came with the Xbox. Once I started doing games writing, I gleaned more and more from colleagues, and the occasional random peripheral showing up on my desk helped me figure out what I did and didn’t like, and my list of “don’t like” for headsets got long. Really, really long. I don’t like cords, but I don’t trust wireless. I don’t like on-ear pads, but over-ear have to be the just right size, have the right padding, and fit snugly without being tight. I can still happily use a $3 mouse, though I may miss the amenities of fancier fare, but I can’t use a headset, no matter how nice, unless it meets my incredibly specific needs. 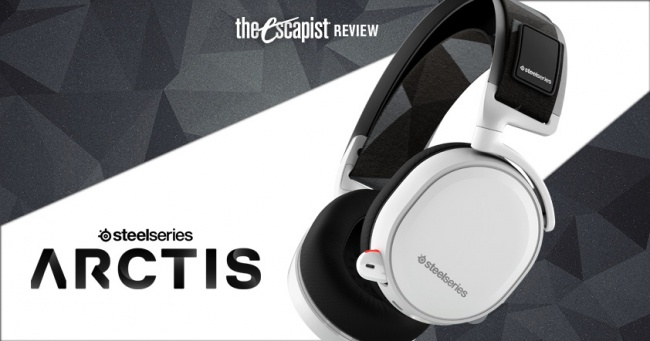 The wired headset I’d been using was perfect in all but the wire, which I find in general is always just a bit too short. SteelSeries sent me an Arctis 7 Wireless Headset a couple months back, and I’ve been using it ever since. I’ve been waiting for that day to arrive when I realize the fatal flaw in the headset, and revert to my wired fallback. It’s happened with every headset I’ve used in the last three years, sometimes it takes 30 seconds, sometimes 30 days, but it always happened. With the Arctis 7, that day never came, and at this point, I’m convinced that the Arctis 7 is the best headset I’ve ever used. They actually sent me an Arctis 3 last year as well, which was nice, but didn’t survive my demanding trials for more than a couple weeks. After four months of constant use, I figured I’d be doing a disservice to any finicky headset folks like myself by not talking about it, even though I don’t have the technical competence of our normal hardware reviewer.

The Arctis 7 isn’t a cheap piece of hardware at $150 USD, but sometimes, you just can’t get comparable quality for cheap, and this may be the only headset I’ve ever used that really makes me understand the drive to buy high-end gear. The comfort of the fit, more than anything else, determines whether I like a headset, and that’s the Arctis 7’s greatest strength. The standard Arctis “ski band” makes sure you don’t have hard plastic sitting on your skull by suspending the headset on a large elastic band. The over-ear cuffs are the perfect size for my only-slightly-large ears, without being so large they feel like saucers strapped to my head. The squeeze is just on the cuff of being too loose, but that’s far preferable to being almost too tight. If you’re jerking your head around (for some reason), the headset will slide back and forth a bit, so avoid headbanging too much. As the comfort goes, however, that’s the only flaw. It is otherwise a perfect fit. It never feels heavy, never feels tight, and it fits properly around the ears without covering the whole skull.

The sound quality is impeccable. I’ll admit that I’m not quite the audiophile a lot of hardware reviewers are, but after a couple hundred hours, I think I’ve gone through about the entire range of human hearing, and I’ve not experienced any hardware problems. I’ve noticed fine details I never noticed before in music I’ve listened to for 20 years, and the surround sound is phenomenal, if ever-so-slightly imperfect in positioning in ways I wasn’t able to discern. I do have limited experience with 7.1 Surround, however, so I can’t even say confidently it’s a hardware thing, but it’s worth noting, at least, and does nothing to detriment the overall experience with the headset.

I’m a bit too stereotypical nerd to be social enough to use my mic as much as a lot of gamers out there, but I do a lot of VOIP calls and I do chat with my gaming buddies semi-regularly, so I got a good bit of use out of it all the same. I never had a single problem, and nobody ever lodged a complaint about the quality, and I wasn’t able to find any noticeable flaws during my own tinkering. I can’t necessarily recommend recording a music album with it, but I can’t imagine any normal activities that it wouldn’t serve in exemplary fashion.

I only tested the Arctis 7 on PC and PS4, and it worked with both pretty much immediately after I plugged it all in. Even though it’s mobile compatible, I wouldn’t really recommend it for on-the-go use. Primarily, that’s because the tiny bit of looseness would be drastically more noticeable in an environment where you’re walking or looking around. You also look a little silly wearing a big ol’ headset like this in public. Nothing personal to those of you who do, of course!

Bottom Line: SteelSeries’ Arctis 7 Wireless headset is the combination of comfort, convenience, and quality I never dared to dream of.

Recommendation: While I don’t think the Arctis 7 would be well suited for mobile use, as an at-the-desk headset, I’ve never seen its equal. The perfect headset for the most finicky wearers.

Pay What You Want for Eight WordPress Courses