I quite enjoyed Spearhead Games’ Stories: Path of Destinies at PAX last year, but the demo I played was certainly not indicative of just how good the game would turn out to be. As a single bite-sized run, Stories is a seemingly run-of-the-mill story-driven ARPG. Concluding each run, however, you’ll get a bird’s eye view of just what you missed, as even a handful of binary story choices results in a host of possible endings. The story conclusions are categorized by the game world’s four secrets, which you’ll unlock by discovering one of the endings in that row. Naturally, you’ll be endeavoring to unlock them all. 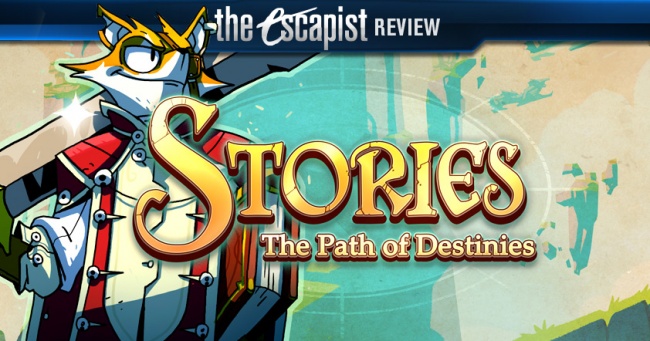 The first choice of your journey will be mostly the same each time, though you do unlock options as you play, which broaden the scope of your possible future storylines. You take on the role of Reynardo, a fox with a history of piracy and penchant for swashbuckling, as he takes on the most unexpected role of hero. Nobody is particularly fond of the mad emperor, who is poised to crush the rebels, unless our hero finds the power to stop him.

The focus of Stories is, unsurprisingly, the story, but the combat is integral to the experience, and lends a lot to the excitement of discovery. You’ll need to craft new swords to unlock new paths through each story segment, as locked doorways require a sword of the appropriate element. The combat system is combo-based with standard controls, so it’ll be familiar to most. The difficulty scales slowly, so you’ll have plenty of time to acclimate if you’re not used to the system, but early fights won’t be a challenge for experienced players.

The need to gather crafting materials encourages you to break the various objects scattered around, but the limited number of scripted responses from the narrator gets irksome almost immediately. I thought the rest of the reactive narration was quite well done, so this seemed almost out of place. The story itself is an impressive catalogue of character interactions and plot twists. Of course, without having an extensive setup, plot twists don’t tend to be that shocking, but as you play different storylines and learn more about the world, the twists become more and more impressive.

Stories: Path of Destinies turns games’ branching narrative on its head. Your propensity for replaying RPGs just to see the other conversation options is a minimum requirement for progress, and you’ll need to go back through each decision multiple times to see what ripple effects it may have had on the story’s conclusion.

Bottom Line: Stories: Path of Destinies is a whimsical, cartoonish story experience that demands a near-methodical approach to navigating storylines. You learn with each run, but it’s harder than you think to avoid making the same mistake twice.

Recommendation: Stories is the perfect game for a story explorer, but the inherent repetition of levels will be offputting to gamers less keen on replaying games.

Enter Here for Your Chance to Win a $1,000 NewEgg Gift Card!