Retro games are a big deal right now, and I couldn’t be happier. I love seeing devs who grew up on classics release their own unique takes on the medium, from Super Meat Boy‘s brutal platforming to Half Minute Hero‘s hyper-condensed JRPG gameplay. But what makes Super Chibi Knight great isn’t that it features RPG mechanics, Legend of Zelda adventuring, and the ability to ride giant mounts into battle – although it does all these things. It’s that it brings a new generation of gamers into the creation process, using an eight-year old as its sole voice actor. When that’s your baseline, how is it possible to be any more charming? 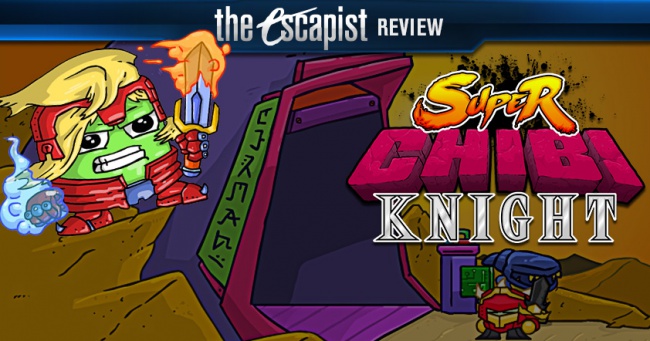 Super Chibi Knight is a retro-style RPG platformer in the spirit of classics like The Legend of Zelda II. Your character is a girl from the Kingdom of Oukoko who – without needing any sort of tragic backstory – decides to defeat the evil General Tso who threatens the entire world. To beat him she’ll need to train her combat abilities, gain powerful equipment, and become an expert in one of two schools, the spellcasting Sorcerers or the animal-commanding Beastmasters.

First and foremost, Super Chibi Knight is an adorable game. The cartoonish animation style is lovingly crafted, and the voice acting – performed solo by the developer’s daughter – gives it an incredible personality and charm that’s completely endearing. It feels like the classic platformers we played on Super Nintendo consoles long ago, complete with retro graphics and a high difficulty curve, but without the frustrations of limited lives and Game Over screens.

But Super Chibi Knight doesn’t rely on charm alone, it also ties in RPG mechanics. Your character starts the game as a cheek-pinchingly cute child with a lowly wooden sword completely outclassed by… well, everything. But as you explore the game world, uncovering side quests, shops, and giant bags of XP, you’ll obtain upgrades that are enchanting and reflect advanced abilities. Each level-up is equal parts useful and adorable, and eventually the young hero will become an impressive badass before your eyes. Your armor and weapon upgrades are fixed, but you can still swap between them while keeping the benefits of the most powerful item.

Where you do get a choice is between the Sorcerer and Beastmaster branches. At the end of the game’s first act, you can either access the mountain society of the Beastmasters or take a ship to the Sorcerers’ island. This choice isn’t be explicitly advertised – just implied through the game’s lore. So if you were hoping to be a Beastmaster but stepped on the boat thinking you could return to the island? Too bad – the game will autosave and you’ll have to start from the beginning.

Once you’ve arrived at your chosen path, you’ll seek out upgrades that go beyond straightforward hack and slash combat. Finding specific sorcerers lets you use a special meter to cast heal spells, call lightning, or create a personal shield. Beastmasters, meanwhile, summon powerful animal mounts – like armored creatures who resist damage or a dragon that can fly across the map shooting fire. Once you’ve trained to your satisfaction, the hero can return to her home town and defeat General Tso once and for all.

Now that’s not to say each path is equal. From a design perspective, the Beastmaster path is way more dynamic than Sorcerer, adding fresh new mechanics and fantastic creature designs. Meanwhile, half of the Sorcerer spells are ordinary combat boosts – Fire Sword and Shield specifically – while Lightning burns through your entire Special meter so you don’t feel especially powerful. That’s not getting into the fact that riding a Beast just looks plain cool.

But here’s the twist – from a gameplay perspective, the Sorcerer path is more engaging. The Sorcerer’s island has bigger dungeons to clear and more platforming content to explore compared to a linear Beastmaster path. You can also mix and match gameplay approaches – one could hurl lightning and mop up remaining enemies for one combat, then play the tank by absorbing damage with heals spells the next.

Most importantly, the Sorcerer path is challenging and satisfying. Playing the final act as a Beastmaster is fun but game-breaking – you could just summon a dragon and blaze across each boss challenge in minutes. But Sorcerers must use every skill in their arsenal to win, making a magical victory cathartic and memorable. In other words, the Beastmaster path is suited to casual players while Sorcerers are Super Chibi Knight‘s Hard Mode. It’s great to see a game feature both approaches, but having some middle-ground between them would’ve been nice.

Thankfully, Super Chibi Knight is highly replayable. Each campaign can be completed within 2-3 hours, and there are all kinds of side quests that will keep you occupied for multiple campaigns. The game has secrets and achievements to unlock that I still haven’t solved after two playthroughs. It even uses that old-school Zelda system of unlocking cheats with your file name – for example, you can use the developer’s daughter’s name to max out your equipment before the very first quest. I find myself hoping Super Chibi Knight will get more content down the road, but in the meantime you can’t go wrong with what’s here.

I mean, there’s armor with room for her set of pigtails. How adorable is that?

Bottom Line: Super Chibi Knight is an absolutely charming retro RPG that will engage you from beginning to end. The campaign is on the short side – much like its hero – and the difficulty curve is through the roof at times. But it’s satisfying all the same, and will draw you in through both of its story paths.

Ted 2 – Don’t You Get it? The Teddy Bear is Alive and Swearing!