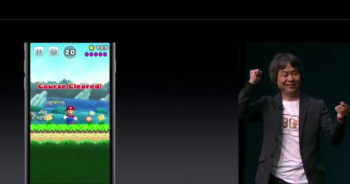 Yesterday, Nintendo released a video detailing some key features of its upcoming mobile title Super Mario Run, but it did leave out one small detail, which series creator Shigeru Miyamoto revealed to Mashable in an interview. You will need to have a constant internet connection to play the game.

“But actually, the security element is one of the reasons that we decided to go with iPhone and iOS first. So [always online] is just – based on the current development environment – a requirement that’s been built into the game to support security and the fact that the three different modes are connecting to the network and interacting with one another,” said Miyamoto.

He added that the team did think at one point that it would be nice to have the World Tour story mode available standalone, to be able to play without an internet connection, but it would be too complicated to program.

“Unlike our dedicated game devices, the game is not releasing in a limited number of countries. We’re launching in 150 countries and each of those countries has different network environments and things like that. So it was important for us to be able to have it secure for all users.”

8 Biden Memes That Will Make Us Miss Him in Office

Nocturnal Animals – Well, That Was Something (and Different)