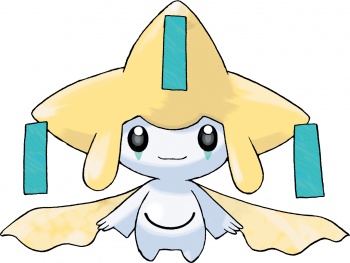 GameStop has Pokémans for you, let it show you them.

Previously this year, GameStop offered a Pokémon download for a Pikachu-colored Pichu, and while I’m sure this was really cool for the average Pokéfan, it doesn’t seem quite as special as the next rare offering that starts this weekend. Beginning this Saturday, February 27, GameStop will be allowing the Poké-crazed to get their hands on the deliciously rare Jirachi, a wish-granting legendary Pokémon that almost compares to Mankey, the greatest Pokémon ever conceived (is it a man, or is it a monkey?).

Jirachi is said to awaken only every 1,000 years when the Millenium Comet passes by, and at this time will grant wishes. I know this off the top of my head. Most commonly, people will ask Jirachi to instantly let them catch ’em all, which is sadly the only wish Jirachi cannot grant. In fact, Jirachi will grant no wishes even partially related to the Pokémon cartoon’s opening song, so don’t waste your time.

The pointy headed Jirachi will only be available until March 13, 2010, giving Pokéfans only two weeks to get this rare monster into their collections. It is said that Jirachi can not be acquired through normal gameplay, meaning that if you ever were to go out of your way to download a Pokémon, now is the time. Pokémon Diamond, Pearl, or Platinum will be required to download Jirachi, so I don’t want to see anybody heading to GameStop with a big gray Game Boy playing Pokémon Red trying to figure out why they can’t make it work.

Jirachi is not only a strong Pokémon that can use abilities such as Wish, Confusion, Rest (sounds powerful), and Draco Meteor, but when traded into March 14’s Pokémon HeartGold and SoulSilver will unlock a special Route inside the included Pokéwalker accessory. The Pokéwalker is a pedometer that can hold Pokémon to level them up or help Pokéfans encounter special Pokémon or hidden items. Using Jirachi is the only way the Night Sky’s Edge Route can be accessed in the Pokéwalker. At this point, I’m sufficiently confused, but as always, I know you Pokéfans know better than me here.