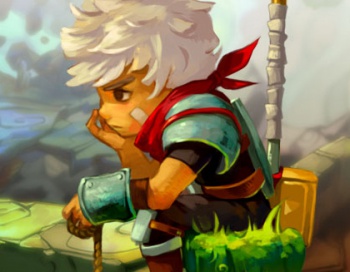 How do you follow up releasing one of the best games of the year? You send a copy of said game to a poor soldier stuck in the middle of nowhere.

Bastion has earned a lot of love for Supergiant Games since it was released this summer – you know, because it’s great. But now there’s another reason for kick up the studio’s coolness score: Supergiant sent a physical copy of the game to a soldier stationed in Afghanistan.

As a result, downloading a copy of Bastion was easier said than done. He tried to pick it up via Steam and Direct2Drive, but the aforementioned internet connection essentially killed that option. So, shagnasty dropped a note to Supergiant games to inquire about getting a physical copy of the game.

Because Supergiant only has a few full-time staffers, creative director Greg Kasavin wound up responding to the email. According to shagnasty, “[Kasavin] told me they had no plans of releasing a physical copy in the future, but if I gave him my address then he would see what he could do.”

A few weeks later, shagnasty received a package that contained a copy of Bastion and a themed bandana because – according to Kasavin – “that seemed like it might come in useful out there.” All that Kasavin asked for in return was that the officer purchase the game on Steam when he got home to the U.S.

Wipe Your Backside With Moby-Dick

Netflix No Longer Wants Anything To Do With Games