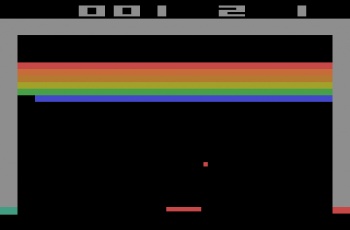 Nostalgia will always keep classic videogames in our hearts, but now they’ll be close to our stomachs too thanks to a new promotion rolling out at Taco Bell.

Chowing down on a beefy 5-layer burrito shouldn’t be the only thing on your mind if visiting a Taco Bell in the near future. Apparently, the fast-food chain has a new ongoing promotion where free classic Atari games are being given away with the purchase of a meal, and also sold separately for $1.50.

Though the promotion doesn’t seem to be active at every Bell quite yet, it should be hitting most of the burrito emporiums eventually. Atari classics available are Breakout, Asteroids, Lunar Lander, and Centipede. Some have reported Super Breakout as one of the titles, but apparently this is a marketing error according to co-creator Curt Vendel’s post on the AtariAge Forums.

Each game has both a classic and enhanced mode, with three levels of difficulty: beginner (made for young children as required by Taco Bell), medium which is arcade accurate, and expert for a greater challenge. The Flash-based games work on both PC and Mac and include all original gameplay mechanics, though Lunar Lander actually features an extra stage where the ship docks with a command module.

For $1.50 these are a pretty easy purchase, considering how some go for $5 on services like Xbox Live Arcade. At the least, you could convince your kid to eat a gas-inducing meal and reap the reward of the included Atari game. Plus, the Macintosh can use any new release it can get, even if these are 30-year-old games.