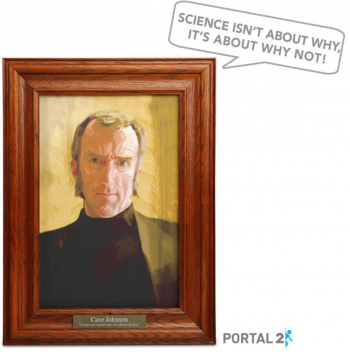 If you’re a fan of fine art and are looking for something to put on your Holiday gift list, you may want to consider this talking Cave Johnson portrait.

Portal 2 had a number of great moments, but one of the definite highlights was when you explore the decayed ruins of Aperture Science and listen to Cave Johnson’s pre-recorded messages over the PA system. Soon, fans of Mr. Johnson’s increasingly crazy ranting will be able to listen to him whenever they want without having to boot up and play through portions of the game, because ThinkGeek has revealed that it’s about to start selling an official Portal 2 Cave Johnson talking portrait.

The portrait will be just over 15 x 11 inches and will say thirteen different quotes, including the bit about creating combustible lemons to get back at life. You can actually read the entire list of quotes here and, boy, are there some gems.

The portrait is going to sell for $40 and will reportedly become available on December 17th, just in time to become a last-minute stocking stuffer.