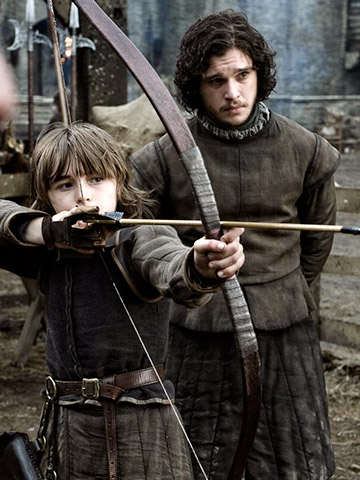 I first read A Game of Thrones when it came out in paperback in late 1996. Ever since then, I’ve been captivated by the world created by George R. R. Martin because it was a fantasy story that didn’t concentrate on the more crazy elements like magic spells or weird creatures that are usually tropes of the genre. There isn’t a wizard’s tower or orc anywhere in Westeros, and the sparing appearance of undead or mysticism only underlines the strong human emotion and compelling story. The subsequent books in the series only piled on the amazing plot twists so that it eventually felt that every chapter seemed to end with a stinger. That’s why when I heard that HBO was considering making a TV series based on Martin’s books, I wasn’t surprised. I was fucking pumped.

Like many of you, I’ve been following the production and marketing blitz for the show with barely contained anticipation.The pilot episode which premiered last night did about as good a job at dramatizing the story as possible. There’s an old saying in the visual arts that it is much more effective to witness characteristics and plot events rather than hear it explained with dialogue – “Show, Don’t Tell.” There’s a lot of background material and characters to introduce and I thought that producer/writers David Benihoff and Dan Weiss showed as much as they could without “telling ” the audience. Of course, some compacting of the timeline needed to occur to shoehorn a 694 page book into a 10-hour television season.

It’s my lot in life to be blessed with a wonderful wife who unfortunately has no love for the fantasy genre. She’ll watch the random Harry Potter movie with me, but she grumbles, “Not again,” every time I put on The Lord of the Rings. But we’ve decided to watch Game of Thrones together, along with my mother-in-law who’s visiting, as a litmus test to see if the show could resonate with non-fans.

Be warned, there are some minor and major spoilers here. If you haven’t watched the show or read the books and don’t want to ruin the surprise, tread warily. (Oh, and if you’re looking for a straight up summary of the events of the episode, you might want to check out Susan Arendt’s recap here.)

I loved how the cold (heh) opening before the credits mirrored the prologue of the first book. The scene with the three men of the NIGHT’S WATCH (I know their names but I’m going to save you from being inundated with name of every minor character) crossing under THE WALL and encountering the WHITE WALKERS sets the tone for the whole series. The bloodthirsty OTHERS are probably the most supernatural element from the first book, and showing the TV audience their creepy glowing blue eyes from the start was a great way to show that something is rotten in the state of Westeros.

My mother-in-law didn’t understand why the deserter was killed, though, which is kind of an important event to grasp. By showing the mystical Others as real, the audience might not have understood that almost no one in Westeros believed the creatures existed outside of children’s fairytales. Sean Bean as EDDARD STARK seems to take the story at face value, even if he tells his son later that it wasn’t true. There’s a lot of nuance to be understood, and given my mother-in-law’s confusion it may not have been conveyed very well in the show.

HBO series always have very iconic and visually interesting credit sequences (The Sopranos, True Blood) and I thought that the stop-motion styled credits for Game of Thrones were really cool. It was a good idea to use a map as the focus so that viewers unfamiliar with the books might get a sense of scale and geography. I wasn’t crazy about the sweeping music – a recognizable theme might have been a better choice – but perhaps it will grow on me.

The STARK family is the focus of the show, and I loved how they were introduced with BRAN getting archery lessons from his brother ROBB and their half-brother JON SNOW as their parents Eddard and CATELYN look on. The scene showed that the family honestly cared for one another without stating it outright. I think there might have been too many names thrown out there for new audiences to understand, but my wife was clearly able to tell the familial relationships even if she didn’t know what they were called. 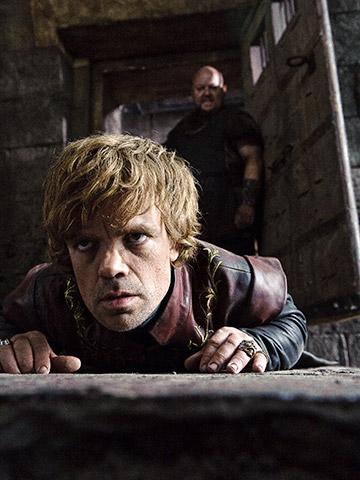 The best example of being shown a character without being told about her antics was every scene with ARYA STARK. She is clearly not happy with the needlepoint lessons with her sister SANSA and longs to be practicing with the laughing boys. Later on, she revels in messing up her sister’s face by spraying her with mushed peas, which cements her tomboy character for the viewer. All this was achieved without Arya having more than five lines of dialogue in the whole episode. Her scenes prompted my wife to say she’s a “great character.” Hehe, just you wait …

The scenes with DAENERYS TARGARYEN and her brother in exile were perhaps the most truncated for the show. By the end of the pilot, she’s already married to the savage KHAL DROGO which loses a lot of the pathos of VISERYS’ creepy manipulation of his younger sister. I am glad though that he warned her not to “wake the dragon” though; that’s a key piece of dialogue that stuck with me from the book. And even though the violence and savagery of the DOTHRAKI were shown excellently with the fight at her wedding over who would get to bed a dancing woman, I was upset with how the producers portrayed the consummation of Daenerys and Drogo’s marriage. In the book, she is clearly frightened at losing her virginity to such a powerful man who she has just met, but Drogo surprises her with tenderness that leads to true love between the mismatched pair. In the show, we cut away as Drogo pushes his new bride into a more convenient position. Not exactly tender. Also, and this is a quibble, they were supposed to make love in the plains under the stars after a long ride on their horses, not on a rocky beach. The Dothraki are the nomadic horselords, and distrust the “poison water” of the sea. That was the only part of the show that didn’t ring true to the source material for me.

Introducing Peter Dinklage as TYRION the IMP immediately post-orgasm from the ministrations of a Northern whore was a bold choice, and the “interruption” from his brother JAIME LANNISTER bringing in four more ladies further lets the audience know that the pair are complicit in their lechery. Dinklage’s performance was incredible, and I look forward to where the story takes the character even if my wife wondered if he is normally endowed or not. Sigh.

Jaime Lannister was interesting but I wasn’t completely sold on his relationship with his sister, CERSEI. They only have one scene together and I don’t think it conveyed the complications between them. The blonde queen isn’t even named, but the power she has over Catelyn Stark and the other women in WINTERFELL is creepily demonstrated from their first interactions in the courtyard. My wife did not immediately understand why, but she recognized there was a lot of tension in that scene and wanted to know more.

The final scene with Bran witnessing the incestuous coupling of Jaime and his twin sister and the subsequent delivery of the line, “The things I do for love,” was just amazing. That’s the point in the book that I remember being completely sucked into Martin’s story – They are screwing?! And then he kills the boy? Crazy! – and the writers Benihoff and Weiss made an excellent choice to end the pilot on that cliffhanger with poor Bran falling into the camera. My wife and mother-in-law gasped when that happened, and I couldn’t have asked for a better reaction.

The first 60 minutes of Game of Thrones didn’t disappoint. There is a huge list of characters for a new audience to understand, and the writers hedged their bets by allowing many to simply appear without being identified – THEON GREYJOY, I’m looking in your direction. The biggest worry that I had going in was that the large cast would make it difficult for people to understand what was happening. Watching the show with newbies was a bit frustrating because there’s so much that I was asked to explain, even though I implored my wife to wait until the end of the show to ask questions. I spent about fifteen minutes telling them about JON ARRYN and the letter from his widow, and how she was related to Catelyn, and that the Lannisters were implicated in the murder, and that the Targeryans were the true rulers who KING ROBERT BARATHEON and Eddard Stark deposed … There’s a lot there that just didn’t come through from a single casual viewing of one episode. A careful eye attuned to the plot can see the hints of all these threads, but it was a lot to ask for my wife to make all these connections based on a line or two of dialogue.

The biggest downfall of the pilot episode for me was that my mother-in-law didn’t immediately recognize that the brother and sister Lannisters were doing it together. I had to tell her it was incest, which kind of ruined the moment of discovery for her.

Despite that, both my wife and mother-in-law honestly said that Game of Thrones was good and they were excited to continue watching it with me. How much the two of them would have enjoyed it if I weren’t there to talk about the complexity of the plot, I’m not sure, but the superior acting and the visceral depiction of violence and sex was definitely enough to captivate them almost as much as the book did for me 15 years ago.

We’re all looking forward to the second episode.

Games Could Soon Be Reading Your Emotions