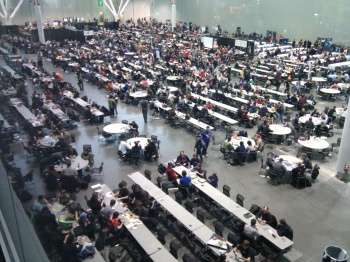 Double Exposure, the convention management company behind DEXCON, DREAMATION, and the Avatar System LARP, has launched a new program designed to introduce players to tabletop games. The Envoy Program partners with game companies, conventions, and retail stores to bring in Heralds, trained game masters who perform demonstrations or run games. The program aims to help small game companies have a presence at more conventions and retail stores, and to help conventions and stores provide more interactive introductions to games, new and old. The Envoy Program also offers to run games for smaller gaming groups, Game Days or other events.

Envoy is currently recruiting Heralds across the Unites States. Heralds will be trained to run games professionally, and provided with new, sealed copies of each of the games they are trained to represent. The program will also set Heralds up with events to attend. Heralds are unpaid, but do receive some benefits for being part of the program. The Escapist spoke with Vincent Salzillo, President of Double Exposure Inc., about the perks of being a Herald. “Envoy will be a meta-game unto itself, in the sense that Heralds will earn experience points for demonstrating and running games, which allow them to advance in ‘levels’ through the program. Each level brings additional prestige and a higher potential for perks. Those same experience points will also allow Heralds to ‘buy’ games and other merchandise from the ‘Herald Store’. Since Envoy will be representing dozens of companies, this allows Heralds to obtain games that they are not familiar with and broaden their horizons. Plus, you know, stuff.” The connection to game companies goes even deeper. “Heralds will have direct access to the designers of the games, and will be the front line for possible rules changes and errata,” says Salzillo. “New editions of games in the future may very well include input from the Heralds who represent each company.”

Smirk and Dagger (HEX?HEX, Sutakku, Cutthroat Caverns), Nazca Games (Cipher Ops, Volt), and Arc Dream Publishing (Call of Cthulhu, Godlike, Better Angels) have all joined the program. “Envoy’s main purpose is to physically show [a game company’s] products to potential customers and encourage their purchase. How many venues across the country include demonstrations of your game this weekend? Not enough. Let’s fix that,” states the Envoy website.

Playing a demonstration of a game is far more likely to get me to buy it than just box art, and I think every tabletop gamer has a story about the time they picked up a new game and discovered, to their disappointment, that it just didn’t click with their gaming group. The Envoy Program strikes me as a great way to get a preview of a game you might never have considered. Do you have any gaming disaster stories that would have been averted by a demo?

This Republican Video Game is the Elephant in the Room