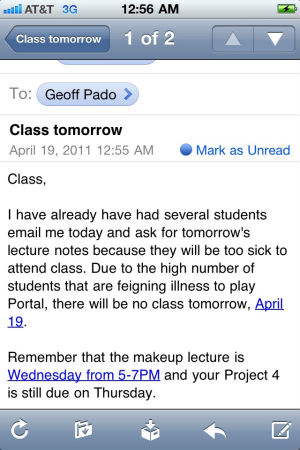 So many students called in “sick” to school today that a teacher was forced to cancel class thanks to Portal.

Don’t lie – you’ve called in sick to school (or to work) because a game came out that you really wanted to play, haven’t you? Whether you’ve come down with Halotosis, Diabluenza or Falloutitis, it’s always the same: “Hey boss, I’m – cough – really sick, I – hack – won’t be in today. I’ll see you tomorrow.”

But little do we know that our teachers (or employers) are usually on to our games. Case in point the text you see here to the right: When enough students just happened to call in sick to this teacher’s class that just happened to fall on the release date of the highly-anticipated Portal 2, he (she?) was able to put two and two together.

This Is Diablo, As Told in a Minute