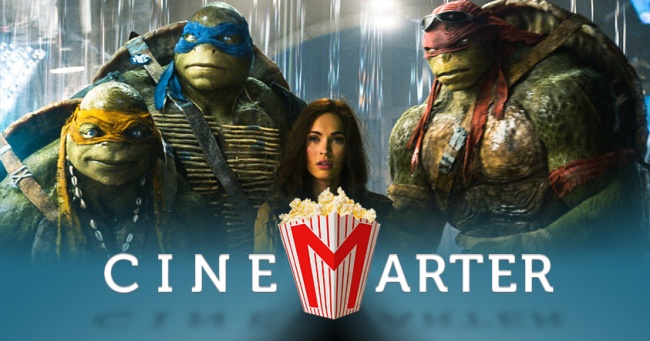 The second live-action film in the rebooted Teenage Mutant Ninja Turtles franchise sees its quartet of anthropomorphic, talking, martial-arts-knowing turtles fight against a teleporting samurai, a giant mutant rhino and warthog – both of whom often ride motorbikes or tanks – and a space alien whose evil plan is to take over the world. If that sounds a lot like the comics or cartoon you enjoyed growing up, well, it probably is a little bit like those things. Teenage Mutant Ninja Turtles: Out of the Shadows might just be the Ninja Turtle movie you’ve been waiting for. Or, more correctly, your 12-year-old self was waiting for.

The Turtles, in case you’re new: Leonardo (Pete Ploszek), the team’s leader; Raphael (Alan Ritchson), the brawn; Donatello (Jeremy Howard), the brains; and Michelangelo (Noel Fisher), the heart. In the last film, they defeated the evil Shredder (Brian Tee). But now he’s back, and he’s teamed up with an alien, Krang (Brad Garrett), and a couple of giant mutant criminals, Bebop (Gary Anthony Williams) and Rocksteady (Stephen Farrelly, WWE’s Sheamus). The turtles need to stop the “take over the world” plot with the help of humans April O’Neil (Megan Fox), Casey Jones (Stephen Amell), and Vern Fenwick (Will Arnett). 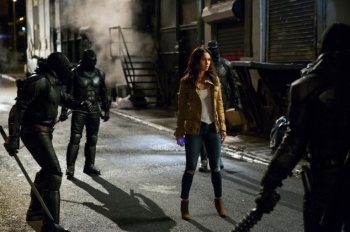 If that sounds like a lot of characters, you’re right. Thankfully, once the teams are drawn, it’s pretty easy to follow who’s doing what and for what reason. The villains are looking for MacGuffins that will allow Krang to enter Earth’s atmosphere, and the heroes are trying to stop them. Meanwhile, the Turtles are having their own internal conflicts; they’re struggling to act properly as a team and trust each other, with the possibility of being able to be turned into humans driving a gap between them.

So, yes, one of the main thematic conflicts is the same “can we get on the same page?” one from the first film. It leads to a couple of different things here, but for most intents and purposes it’s needless repetition. “Be true to yourself,” “trust your brothers,” and “don’t fight each other when there’s a slimy alien eye contained in a giant robot to fight instead.” You know, simple stuff.

I’m very, very mixed on Teenage Mutant Ninja Turtles: Out of the Shadows, but that should be telling in and of itself.

The Turtles are immature and act thusly, which might infuriate or endear them to various members of the audience. They’re teenage mutant ninja turtles, after all. I found them pretty funny, personally – as I did the movie on the whole. With that said, the later parts of that phrase mean that they’re mutants and ninjas, which means their best moments come from the action scenes in which they’re more than happy to take part. Teenage Mutant Ninja Turtles: Out of the Shadows has a lot of action, and some of it’s even okay! There are some incomprehensible moments, it’s true, but some set pieces, like the entire Amazon one, are solid. The finale is a bigger version of the one from the first film, and winds up disappointingly anticlimactic.

Some of the lesser instances come from a combination of lackluster cinematography, choppy editing, and less-than-stellar CGI. Krang is hideous, as are the two mutant animal henchmen, Bebop and Rocksteady. The Turtles are still overdesigned, but I’m not wholly against their look – and they’re significantly detailed, so you can’t really fault the CGI for their appearance. That’s a conscious design choice, and they’ve grown on me since we initally saw them two years ago.

There’s also one moment that indisputably captures exactly what fans of the franchise want. The end credits? They’re animated and the song that plays over them is one of the cartoon themes. It makes you wonder why we couldn’t just have a whole movie like that, especially when so much of it’s been made with computers anyway. But the end result might be even worse, so I guess we should take the small victories where we can get them.

I’m very, very mixed on Teenage Mutant Ninja Turtles: Out of the Shadows, but that should be telling in and of itself. It has a lot of elements that needed work – its screenplay is both too crammed and too basic – some of the CGI isn’t very good, the cinematography and editing for some of the action makes the scenes difficult to follow, and its oft-juvenile sense of humor is going to rub some people the wrong way. But some of its action is good, it personally made me laugh more often than it annoyed me, and it has a little bit of a brain – just the bare minimum, but that’s better than nothing. It’s not good, but it’s not horrible – and that’s as big of a compliment as it’s going to get.

Recommendation: It’s not really worth seeing, but if you see it, you probably won’t be too upset with the time you invest in it.

Next Destiny Expansion to be Revealed Before E3