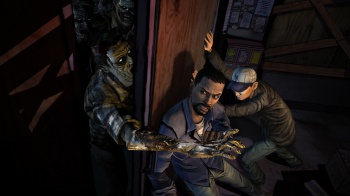 The walkers may be returning sooner than you thought.

The emotional roller coaster that is Telltale’s The Walking Dead series has captured the hearts and brains of many gamers, winning over 80 Game of the Year awards. The episodic series was met with so much success that Telltale confirmed plans for a second season after only two episodes were released, and the first season’s conclusion has only left fans even more ravenous for another batch of heart-warming/breaking drama. Well, it turns out that the wait for new content might be shorter than anticipated: expect more Walking Dead from Telltale before the official start of season two.

Gary Whitta, Telltale’s story consultant for The Walking Dead and writer of season one’s fourth episode, recently discussed the future of the series with IGN. According to him, a second season won’t be coming for a while, but something else is already on the horizon. “I can tell you what you already know,” he began, “which is season two is coming. There’s not much to say because it really is very early in the process … it’s a way off. But, knowing that it’s a way off, and knowing that people are hungry for more Walking Dead … there may very well be more Walking Dead from Telltale before season two. We may have a little something extra for you between season one and two.”

The jury is still out on what exactly this inter-season content could be. Whitta was hesitant to say much more, only offering that it will “make the wait for season two slightly less agonizing.” Obviously, that’s not much to go off of, but (knowing the internet) it’s enough to start the wild mass guessing. Telltale may have a bonus standalone episode in the works, or it could be a Flash game on their website – we won’t know until the developers decide to lift the curtain on whatever it is they’re doing. Expect more details to shamble into the open before too long.