The Terminator series can’t quite find its footing, can it? Outside of the first two films, every attempt at a direct sequel or prequel is at least flawed, if not an outright misfire. There’s technically at least six abandoned timelines, seven if you count the Sarah Connor Chronicles. So if I told you that the developers of Rambo: The Video Game made a prequel to the original duology that uses ideas from the various botched sequels, you’d probably think it’d crash and burn horribly. But no — Terminator: Resistance is actually amazing.

I don’t mean that in an ironic “This trainwreck is so morbidly off the rails I have to see where it goes” Too Human sort of way. Terminator: Resistance is legitimately doing the best job of continuing the series out of every attempt to move the series forward as a modern franchise. This is an obvious labor of love, silencing any doubts that Teyon could deliver a proper gaming experience despite its small team and clearly tight budget.

Set during the Future War time period in the war’s concluding days, you hop into the boots of resistance fighter Jacob Rivers. You’ll help survivors get to safety, learn about the events leading up to the first two films, and take the fight to the villainous Skynet machine army. Despite being set in the same timeline as Terminator: Salvation, Resistance has no interest in trying to retcon the greater series lore, but instead expands upon questions often asked. It covers everything from dueling the first T-850 Terminator to how everyone handles all these constant time travel shenanigans.

Narrative elements tying into time travel do appear in the game, but never in a bad way. While yes, you learn there have been some timeline shifts like in Terminator: Genysis, they never alter things to the point of being unrecognizable. Instead, the majority of what changes has to do with Rivers’ role, going from a random private to a key member of the resistance, something that even catches the resistance’s leaders by surprise. He’s not a war hero built to withstand hundreds of bullets, just a good man trying to do the right thing, wildly confused as to why Skynet has him marked for termination.

What’s marvelous is that you can feel that steep hill to climb as you make your way through each of Terminator: Resistance’s expansive levels. While players can opt to invest resources into toughening up, eventually unlocking regenerating health as an endgame skill, Rivers’ strengths are his brain and being stealthy. Typically, a single shootout can be make-or-break for your fragile health bar, and early encounters with T-800 Terminators are harrowing as your bullets scarcely leave a scratch on their chrome hides.

I still remember my first T-800 kill. I had to lure it right next to an explosive canister. Crammed inside a vent, all I could do was wait as metal footsteps droned closer, until I finally had my one shot. Soon as it was down, I grabbed its plasma rifle and ran, hoping none of its friends came gunning for me. Not since Alien: Isolation has there been such a genuine mechanical and atmospheric embodiment of a sci-fi horror classic.

Ambush tactics are a must for the majority of the game, scrambling to collect whatever resources remain amid the wastelands of Pasadena and downtown Los Angeles. You’ll slap together makeshift explosives and scavenge Skynet chips to power up whatever plasma weapons you can find, keeping just a breath ahead of your enemies. While you can technically play Terminator: Resistance like a standard first-person shooter, you’re gonna have a much harder time of it. The best approach is to appreciate its many ins and outs, as it harnesses key elements of the series’s lore to dredge up new challenges every step of the way.

Terminator: Resistance’s pacing is breathless, harnessing every minute of its 13 hours better than most bigger games. There’s never a moment of too much exposition or a protracted escort sequence. You’re told what you need to know and given the freedom to accomplish your goals as you see fit, be it by hacking Skynet outposts, grabbing everything you can find to blow Terminators to hell, or sneaking past patrols without making a sound.

All of this is enveloped in beautiful sound design. The music is amazing, intermixing homage melodies and original compositions perfectly synced to the tone of every moment. The voice acting and writing capture the dozens of stories around you that feel candid and real. Callbacks to the series’s past entries are clever, like suggesting a kid could name their pet dog “Wolfie.” The rules of the Terminator franchise are followed stringently, actually allowing for some clever twists on player expectations that I won’t spoil. Side missions interlock with your primary goals, rewarding you with not only more resources but a bigger picture of the Future War.

Terminator: Resistance embodies its franchise damn near perfectly. You start off helpless, only to become empowered just in time for the climax. Time travel and other sci-fi staples spice up the plot to be more than just a military FPS, bolstered by a human story of survival anyone can relate to. Fragments of the world we know characterize every level, from dodging patrols in a shopping district or moving car to car under mortar fire across a highway to sniping Terminators across mountainous hills or skulking through blown-out suburbs. All the while, every one of Skynet’s many menacing machines is a worthy threat, no matter if it’s as small as the self-destructing silver fish or a hulking HK tank with twin miniguns. 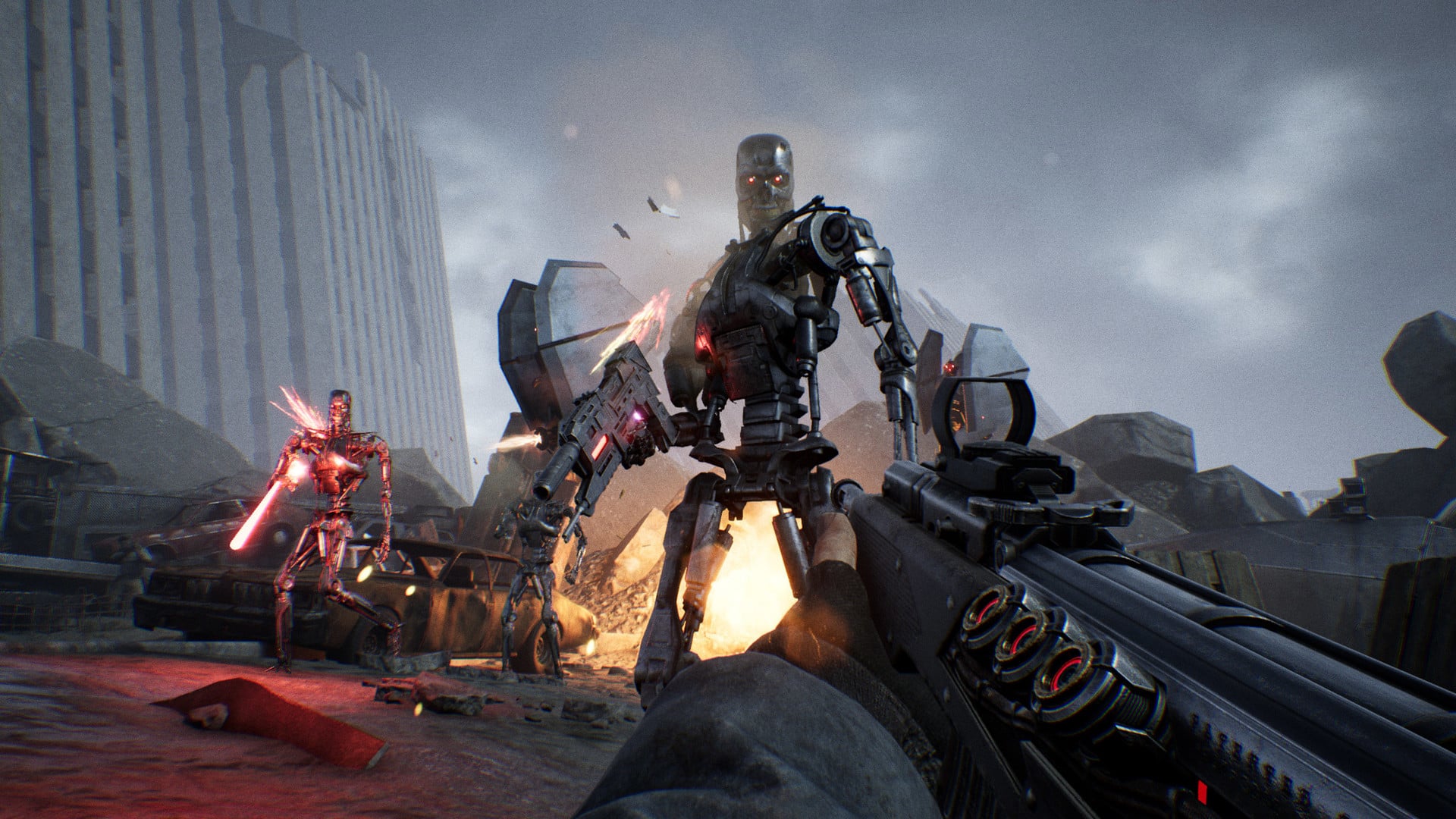 This isn’t to call Terminator: Resistance flawless. You can feel the tugs of its behind-the-scenes limitations, like revisiting previous locations, stiff animations outside of key cutscenes, and a set of moral choices that don’t get as much payoff as Teyon clearly wanted them to have. The default PC control bindings also could use some work, warranting a rebind so you aren’t constantly tossing grenades when trying to heal yourself.

There’s one boss fight with an HK tank that has some minor collision detection issues as well — nothing that will stop your progress, but try not to take cover around the tank if you want to avoid getting shot. Also, the marketing for the game was all over the place, advertising it like it’d be another blockbuster Call of Duty clone, even though it has more in common with Homefront: The Revolution or an apocalyptic Dishonored.

Regardless, it all pays off in a spectacular finale. Terminator: Resistance goes all out for its ending, delivering the sort of fan service most licensed tie-ins could only dream of. All your decisions pay off in one shining moment of payback against the steel monstrosities hunting you all this time. Like everything else in Terminator: Resistance, it’s well earned, satisfying, and drenched in its IP’s aesthetics to a T. By sticking the landing, Terminator: Resistance achieves something no other sequel since Terminator 2: Judgment Day has been able to — it becomes worthy of the brand’s identity.

As Darren Mooney put quite succinctly, Terminator is a franchise more associated with cynical Hollywood sequalization than artistic aspiration to craft something meaningful in the iconic universe. So perhaps it’s fitting that unlike all those that have failed before, Terminator: Resistance isn’t trying to start off a new sub-series or get the franchise chugging along into a mega blockbuster.

Instead, Terminator: Resistance remains content just being a great piece of standalone Terminator fiction, cohesively stringing every element together to craft an experience only found in its particular dystopian future. That’s the best any licensed tie-in can hope for, and thankfully despite a rough critical reception at launch, Terminator: Resistance has found a following. Here’s hoping Teyon’s next classic tie-in is even better.

Ren & Stimpy Documentary to Dive into Creator’s Fall from Grace

People Can Fly Is Creating a Next-Gen AAA Action Adventure