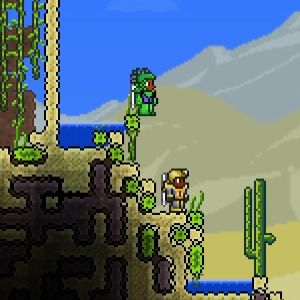 Terraria, like many games encountered in my recent years, is a title I wanted to play on a handheld system so badly. There’s something about games full of grinding that lend themselves well to the casual, “on the go” experience of a portable system, and the PlayStation Vita is proving to be the perfect system for such endeavors. While it’s been out on mobile platforms for some time, the Vita version of Terraria is the one I’ve been waiting for before getting truly into the critically acclaimed game. I have to say – the wait was worth it.

A quick primer for those who aren’t up to speed on their PC game crazes of a few years back – Terraria has been described by the less diplomatic among us as “MineCraft with gameplay,” a sidescrolling crafting adventure, in which players adventure into various biomes, dig for precious metals, cut trees for wood, and build themselves things. At night, monsters come out in full force, forcing the need to build a home, and eventually craft tools, weapons, and armor. Boasting an immensely gratifying progression system, where players get to feel more and more powerful before the next big challenge humbles them, Terraria is just as famed for its intense boss encounters and secrets as it is for its otherwise dime-a-dozen crafting elements.

Being a game focused heavily on mining deep underground and placing blocks around a grid-based environment, Terraria is obviously at home on PC, where the mouse and keyboard provide access to everything in an instant. The Vita version has to compromise somewhat, but an amazing job has been done of packing everything into as easily digestible a package as possible.

Equipment is used with the shoulder buttons, and scrolling through gear is done by tapping the sides of the touchscreen. You can also map four of your most essential items to the D-Pad for quick access. Navigating menus requires both sticks and the shoulder buttons, making them a little cumbersome and confusing at first, but eventually it all makes sense. Aside from the expected cramp one gets in the fingers are holding the shoulder button for so long, the controls are fairly comfortable, and provide everything required for a lengthy session in the unforgiving world.

When interacting with the environment, there are two methods of control. The first is the “Smart” cursor mode, which will mine, shop, and build automatically depending on where the player is facing. This is useful for quickly digging underground or dashing through a forest with an axe in hand. The second method – more suited for building homes or placing stepping stones – is the “Manual” mode, which allows players to manipulate the cursor via the right stick or rear touchpad. Switching modes is as simple as tapping an icon in the bottom left of the screen, and between them, these two control methods give players a brilliant balance between freedom and convenience. 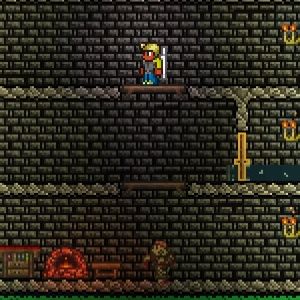 It may take just a little time to get the hang of things, but once you do, Terraria feels comfortably at home on the Vita. It obviously looks beautiful on that screen, and while the framerate may dip everso slightly in only the most densely packed of areas, it runs nicely almost all the time. This is one of those games that truly expose the PlayStation Vita’s short battery life – I’ve been wearing my system out consistently since the game launched!

The controls do suffer a little from lag at times. Every now and then, I found the touchscreen wasn’t as responsive as I’d needed, especially when trying to switch tools in a tight spot. It’s not a problem that occurs too regularly, but it does happen enough to provide the occasional irritation. I also hate how holding down the craft button will start crafting everything available, moving onto a new item when you’ve run out of the materials for the thing you were making. When I need to craft hundreds of wall pieces, I’d like to be able to hold down the button without worrying about getting five unwanted wooden hammers in my inventory.

The PlayStation Vita is earning itself a reputation as a place to go for great portable ports that just make sense. With Terraria, the system gets another string to its bow, providing a handheld alternative with a level of control that you won’t get on any other portable system. It gets to join the likes of Spelunky and Retro City Rampage as a marquee PS Vita title, a game that shows off exactly how useful the system can be for those of us who see a game and think, “I’d love to play that on the toilet.”

Bottom Line: An impressive port that, while needing to jury rig one or two things, does a most admirable job of putting Terraria in your pocket.

Recommendation: If you have a PlayStation Vita, this is a game with hundreds of hours’ worth of justification for the machine. Just be sure to have a power outlet nearby!