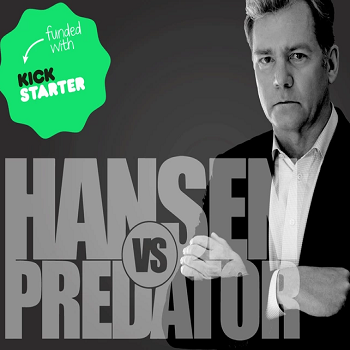 Chris Hansen is here to do two things: Chew bubblegum and kick pedophile ass. And he’s all outta bubblegum.

Everyone just have a seat, right over there, because the host of NBC’s infamous reality series, To Catch a Predator, is back at it again.

Seemingly not content with the hundreds of online creeps he trapped during Predator‘s three year run between 2004 and 2007, Hansen launched a Kickstarter campaign in April, with the aim of “undertaking a new investigation into online predators.” Hansen vs. Predator, as it’s now being called, raised $10,000 on its first day, met it’s $75,000 goal in 22 days, and raised a total of $89,068 from over 1,200 backers by the time all was said and done. America truly loves us some online justice, it would seem.

As promised, Hansen vs. Predator began filming in Fairfield, Connecticut at the beginning of the month, but perhaps more interesting is the way in which Hansen went about involving local authorities in his independently backed sex sting operations. Basically, through sheer force of will.

According to a report published by the New Republic, Hansen first called up the Fairfield police department in mid-August, informing them that he would be setting up a sex sting not unlike the ones he became famous for on NBC, with the lone exception being that neither NBC nor any major network would be involved this time around. It was not a request, but more a warning, and the Fairfield police department was pretty much powerless to prevent Hansen from moving forward with his operation. Ultimately, Fairfield’s deputy police chief, Christopher Lyddy, decided that his department’s involvement would ensure that these stings went off as smoothly as planned and agreed to lend assistance.

“We thought long and hard about this,” said Lyddy, “but at the end of the day we completely understood that this was going to happen no matter what, and that we really had a responsibility to become involved and to ensure this neighborhood was safe.”

Starting on October 1st, Hansen’s crew and Fairfield police camped out for four days at a decoy house in Fairfield, busting ten men in total whose bonds were set as high as $1.1 million.

Hansen said one man showed up with a gun in his car; another, when confronted by Hansen and his cameras said he knew him from commuting on the Metro North train together and pleaded, “No, Chris, please don’t do this to me”; another admitted to police to having previously sodomized a 15-year-old. “In almost every case they were extremely specific about what they wanted to do, which sexual acts, how they would start,” Hansen told me. “You could see the grooming process in action: ‘we’ll do this in the kitchen together, we’ll take a bath together, we’ll go to bed.'”

Given the salacious and exploitative nature of Hansen’s stings, there have obviously been a few naysayers who argue that shows like To Catch a Predator are doing more harm than good. Among the accusations leveled at Hansen is the belief that, “by subjecting the merely accused to the potential of mass humiliation, the show neglects the common notion of innocent until proven guilty.” Many of these concerns seem rooted in the particularly grisly case of Louis Conradt Jr., an assistant district attorney in Murphy, Texas who shot himself during a confrontation with SWAT while Hansen’s crew waited outside his home. Conradt’s family later received an undisclosed sum from NBC to settle a wrongful death suit against the network.

But according to Hansen, the risk is worth the reward — the reward being that potentially dangerous predators are being taken off the streets. “As Fairfield demonstrated, this is still very much a huge issue,” said Hansen. “We just made that the safest neighborhood in America.”

In any case, I don’t see how there’s any way that Hansen vs. Predator can do any more damage to the American psyche than its predecessor, Alien vs. Predator: Requiem, already has.