[puzzle=1]The movies have given us a lot of “WTF?” moments over the years, but most of the time we never find out just how close we came to some of our biggest movies turning out radically different than we finally saw them. Here’s a quick sampling of some near-misses in some of our biggest recent films.

Please Note: While much of the information in this piece is, by now, common knowledge, certain key elements became known initially through the efforts of specific journalists. Wherever possible, those sources have been cited and linked. Also Note: It should go without saying that a spoiler warning is in effect.

For my money, it’s a mark in Spider-Man‘s favor that it doesn’t sweat the small stuff of superhero mechanics. Peter Parker transitions from his chintzy home-made “Human Spider” getup to the ultra-sleek, meticulously-manufactured Spider-Man spandex with no explanation whatsoever. But in an early draft of the screenplay by writer David Koepp, that wasn’t the case.

In this version – written back when Doctor Octopus and Green Goblin were both supposed to be in the first movie – Spidey wears “not quite there yet” versions of the suit throughout the film, alongside a running gag about unlicensed Spider-Man merchandise actually looking better than the real thing. At the film’s climax, when Peter finds himself needing to rush off to the final battle with no suit on hand, he solves the problem by ducking into a Halloween Store and borrowing – at last – the “proper” Spider-Man costume.

X-Men: The Last Stand ties its already terrible story into even bigger knots with a drive to kill off or “de-power” various characters who, coincidentally, were played mainly by actors whose contracts were up for renegotiation (read: might suddenly cost more.) One of the biggest write-offs was Rebecca Romijn’s Mystique, who gets dumped by Magneto after she’s unwillingly cured of her mutation and sells him out to the feds in retaliation.

In the movie as-filmmed, it plays out like a blatant example of “kick the dog” to make sure the audience still knows Magneto is bad even though the film is haphazardly stumbling through one of the biggest “Magneto kinda has a point” stories in X-Men history – not for nothing can you now buy “gay pride” t-shirts emblazoned with rainbow-colored Magneto quotations from this movie. Thing is, it wasn’t supposed to be.

Originally, Mystique was supposed to turn up at Magneto’s side for the film’s climactic “A-ha! Maybe we’re not totally cured after all!” final stinger, but Romijn’s scheduling prevented her from being able to film the scene.

John Connor Is a Fake and Skynet is Misunderstood

Terminator: Salvation has a strange dynamic going on: John Connor (Christian Bale) doesn’t seem to be all that good at the “savior of humanity” role he and others believed he’s been destined for. Instead, Sam Worthington’s Marcus Wright – a 20th-Century death row inmate resurrected as a half-human/half-Terminator cyborg – seems to be the more “classical” hero, a born leader and hyper-capable soldier. After the big final battle in Skynet City, Marcus ultimately sacrifices himself to give Connor a heart transplant; leaving audiences to wonder why we spent so much of the movie following some guy who dies and when Connor was going to turn into the Mad-Max-meets-Oscar-Schindler badass we’ve been hearing about for three movies.

Well, originally Salvation‘s big gamble was to pull a huge twist that would’ve changed everything about the Terminator mythology. Believe it or not, when Marcus snuck into Skynet City (he was supposed to be the main character while Connor was going to be a mysterious character who we never saw until the very end), he wasn’t just supposed to find the usual chaotic factory Terminator movies have to end in. He was also supposed to find – I kid you not – a beautiful seaside resort town. Full of humans. Really. Turns out, all this time Skynet has actually been trying to prevent human extinction by keeping a few oblivious “choice” people alive and pampered in this resort while wiping out the “stragglers” in The Resistance. The Terminators have been – in their own way – trying to save us, and the big Final Battle would’ve been humans versus Terminators in an artificially-recreated Club Med. And that’s not all. 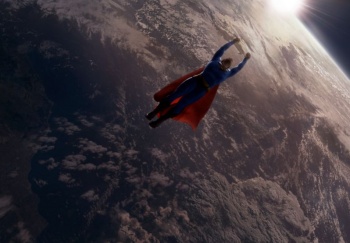 The original ending also called for Connor to (finally) show up in person for the final battle … and get killed! So who leads the resistance and sends Kyle Reese back in time for Terminator 1? Marcus Wright. They cut the skin off his cyborg body and replace it with Connor’s, and he assumes the mantle to keep the John Connor legend alive. That’s right – there is no John Connor: Savior of Humanity, it’s just been a reformed cyborg in a John Connor skin-suit the whole time.

Why did someone think this was a good idea? Who knows? Why didn’t it end up in the movie? Because the “twists” leaked onto the internet and people freaked the hell out, so they changed it.

The Superman That Almost Was

Everyone and their mother now has an opinion about the now-upcoming Christopher Nolan produced, Zack Snyder directed Superman. Well, who here remembers, years ago, hearing rumblings about one JJ Abrams – these days late of Lost and the Star Trek reboot – taking on the job? Ever wonder why that didn’t happen, or what it might’ve looked like? Wonder no longer.

In 2002, long before Lost when Abrams was best known as the creator of Alias and Felicity, he turned in a revamp script titled Superman: Flyby that got Warner Bros. super excited. In this script, Abrams proposed nothing less than a complete reworking of the entire Superman mythology. New origin. New backstory. New powers. New relationships. How new? Well, Krypton doesn’t explode, for starters.

Instead, Krypton is engulfed in a Civil War between King Jor-El and his evil brother. The evil brother seizes power, but fails to stop Jor-El from shooting his infant son (you-know-who) to safety in a spaceship. Apparently, it’s important for the bad guys to kill Baby Superman because he’s (get ready to roll your eyes) “The Chosen One” of an Ancient Kryptonian Prophecy; so they dispatch thousands of their own spaceships to track him down.

In this new continuity, the Kents have been covertly pre-selected by Jor-El to foster parent Superman a la Mary and Joseph, but instead of being innately heroic, the new Clark Kent grows up an introverted emo kid afraid of his own powers – which now mostly include being super-strong. He needs to be wearing the Superman suit, which is now a Venom-like living-costume with a mind of its own, to fly.
Lex Luthor is a CIA agent in charge of UFO hunting, who’s walking around pissed at his superiors about a Dark Secret. When the evil Kryptonian army invades Earth to take down The Chosen One, Luthor teams up with them to kill Superman. No, really. Superman dies!

… and goes to Heaven, where he gets a pep talk from his dead father about The Prophecy that helps him come back to life, rise from the grave and lead humanity in a rebellion against the Kryptonian invaders. Oh, and in a final setup-for-the-sequel stinger: After all the Kryptonians are defeated, Lex Luthor shows up to challenge Superman to a fight (it’ll make sense in a moment) and reveal that Dark Secret of his … he’s from Krypton, too!

This particular script was supposedly written with major input from the studio, producers and then-signed director McG (later replaced by Brett Ratner before the project collapsed completely and Bryan Singer’s Superman Returns was set up instead) though no one has ever really said what exactly came from who.

In any case, it didn’t get very far – remember, this was before even Batman Begins to say nothing of The Dark Knight – so Warner Bros. wasn’t precisely in the “just make it” frame of mind regarding comic book movies, especially having just had the Tim Burton/Nicholas Cage Superman Lives movie fall apart on them. And as if all that wasn’t enough, in September of 2002 the script fell into the hands of famed internet movie journalist Drew McWeeny, then better known as AICN’s “Moriarty” – who published a synopsis of it and opinion piece on it, the reaction to which still rates as one of the biggest “fanboy firestorms” ever endured by a major studio production.

Deus Ex Has Its First Human Revolution With Yahtzee