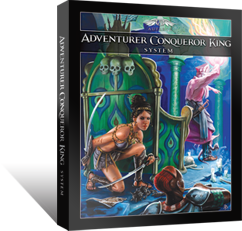 A tabletop RPG from the publisher of The Escapist is coming to a store near you.

If you’re in the New York area and you love tabletop roleplaying, you might want to head over to Soho Gallery of Digital Art tonight to see some awesome D&D related art and throw some dice. The wine and cheese reception also serves as the announcement from Autarch, a burgeoning RPG publishing company made up of Escapist staffers and RPG design veterans. The tabletop roleplaying game Adventurer Conqueror King System is a collaboration between myself, The Escapist publisher Alex Macris and Tavis Allison. After our successful Kickstarter campaign, we are happy to announce at the reception that we have secured a distribution deal with Game Salute to bring ACKS to gaming stores everywhere. The 272-page hardcover book should be in stores this winter.

In addition to the announcement, the Soho Gallery of Digital Art will be celebrating the gamer lifestyle. When you play any roleplaying game, your character sheets can be works of art. I know players who sketched out their character when they started play and tweaked the image as they gained more loot (or changed sex!). Maps are especially important for how we interpret the imaginary world in which our characters inhabit, and a group called the Play-Generated Maps and Documents Archive (PlaGMaDA) is committed to collecting and preserving these artifacts of gaming. Selected images and maps will be the showcase of the “Dungeons and Dragons On & Ever Onward” art show, but there will also be fantasy themed hand-painted pieces such as many beautiful images created by Ryan Browning for ACKS. The show runs from today until January 11th.

If heading down to an art gallery seems a little fru-fru, there’s going to be some serious dice-rolling going on tonight as well. Tavis Allison will be running a module for ACKS as part of his Adventuring Parties program that facilitates RPG events for parties and events. The module he’s running? None other than Erol Otus’s Island Town, which will be the first 3rd party module to be fully-compatible with ACKS.

And if that wasn’t enough, there’s going to be some sexy performances by the ladies of d20 Burlesque.

Here are the complete details:

“Dungeons and Dragons: On & Ever Onward”
curated by Tim Hutchings
images and video by Ryan Browning, Erol Otus, Casey Jex Smith, the Doomslangers, the Cursed Chateau artists, and others
including historical selections from the Play-Generated Maps and Documents Archive

Yeah, I miss living in New York. Have fun, guys.

The House of the Dead Infects PSN