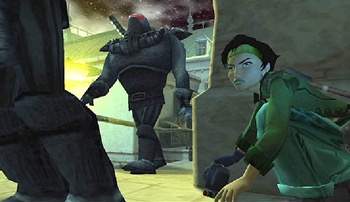 Break open the piggy bank and check the sofa for loose change, because GOG.com has Prince of Persia: The Sands of Time and Beyond Good & Evil for just ten bucks.

Both Ubisoft titles were released during a particularly packed holiday season back in 2003, and as a result slid far under many gamers’ radars. Though they’ve both since been lauded far and wide by people like yours truly, many still have yet to give either game a try.

From now until Monday, August 24th, you can snag each game from GOG.com for just $6.99 a piece or get them both for a paltry $10. Both games are absolutely fantastic (Sands of Time is my favorite in the Prince of Persia franchise), but Beyond Good & Evil, in particular, is woefully underplayed.

Remember that question from the Videogame Buddies quiz about the young reporter? That’s Jade, from Beyond Good & Evil. So consider this an Escapist directive: Go get it and play it. You’ll be glad you did.