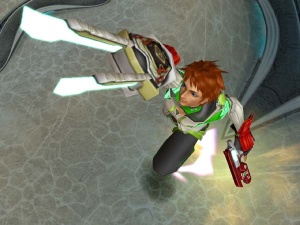 It just makes sense that Sega, first out of the gate with a console-based MMOG in 2001, would revisit their near-success for this round of console warfare. It also makes sense that they again failed. Phantasy Star Online may have been a brilliant game hampered by the Dreamcast’s tepid acceptance rate, but PSO was just a plain old crummy game, and another example of how far Sonic Team has fallen from its former glory. Some may consider the game’s lackluster reception a sign that console players aren’t ready for MMOGs, but really, it just sucked. Period.

There was also the problem of integrating the accepted method of paying for an MMOG (paid subscriptions) with Microsoft’s vision of the online future (paid subscriptions). Would-be MMOGers wanting to dig their claws into Sega’s anime-flavored online world balked at the idea of paying twice to play PSO – and for good reason. Not only is it free to play every other game over Xbox Live, but PC games haven’t required a subscription to a third-party service since the late ’90s. PSO on Xbox Live presented somewhat of an anachronistic conundrum. For all of the forward thinking that went in to the effort, on the whole, it just felt too behind the times to take seriously.

So if the giant isn’t awakening, and the frontrunner is falling behind, who’s looking ahead to console gaming’s future and plotting to take over the world one proprietary server architecture at a time? A few folks, actually, and more every day.

This year’s E3 is sure to be a font of information as regards to console games of all flavors, but the relative lack of hard information regarding the few console MMOG projects we know about these past months is a sure indicator we’ll be hearing some interesting news in Santa Barbara next month. 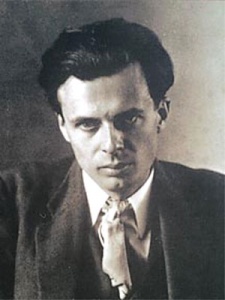 All eyes are currently looking toward Webzen, whose sci-fi MMOG Huxley has promised gigantic battles and mind-blowing graphics, etc. Early reports suggest it’s a space marine/apocalypse mash up with the usual array of customizable characters and loot drops. Rumors the game will support 5,000 simultaneous connections on each server address the concern of consoles’ scalability, and if they pull it off, Huxley may just signal the beginning of the console MMOG renaissance.

But Huxley isn’t the only trick up Webzen’s sleeve. Taking a page (and a developer) from Grand Theft Auto‘s book, APB promises to be a “a genre-breaking game unlike any other in the MMOG market in which Gangs commit crimes and Law Enforcement try to stop them, resulting in dramatic chases, shoot-outs, busts, escapes and arrests.” Think GTA with that online component we’ve always wanted, and you may just have it. While the project must be viewed with extreme cynicism for fear it will end up just another GTA clone, the involvement of David Jones, mastermind behind the GTA series, shouldn’t be overlooked, and the possibility that Webzen may have cracked the console genre’s server architecture nut could actually make APB the “genre killer” it’s marketing hype suggests it is.

On the superhero front, both DC and Marvel are expected to bring a caped crusader-based MMOG to market at some point in the near future, although plans for a DC MMOG seem far more solid. Comic icon Jim Lee has partnered with SOE to produce an MMOG designed around the DC universe (think grinding to an epic mount shaped like the bat mobile), and all signs indicate the game will be finished next year. I expect we’ll see a lot about this one at Sony’s “invitation only” press conference next month in Culver City. 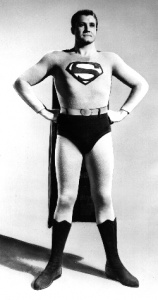 Marvel’s plans, however, are about as vacant as Sigil Studio’s offices. Rumors circulated last year about a Marvel MMOG being developed by the creators of Vanguard, but following that studios tragic demise and re-absorption into the SOE collective, no further details have emerged. It wouldn’t be a terrible surprise to learn that the Marvel MMOG has been shelved to preclude competition with SOE’s DC game, especially considering it had been rumored to be an Xbox 360 game. But then again, you never know.

Sony is also in the spotlight with their seemingly ridiculous Home project, a mash up of Xbox Live and Second Life, promising to offer virtual world creation, file sharing and a host of other features to owners of the PS3. The downside? The PS3. Also, the similarity to Linden Lab’s great experiment may spell the project’s doom from the outset, as Linden and the advertisers they’ve attracted begin realizing that an “anything goes” environment in the virtual world is just as obnoxious a place as it is in the real world. In any case, considering Home ate up the lion’s share of Sony’s GDC presentation, in spite of numerous bugs and a general lack of detailed info, we can safely expect they’ll be offering an open house of sorts at E3. I can’t wait. I hope there’s punch and pie.

Not participating however, this year at least, is Blizzard – the one company everyone keeps hoping and dreaming will crash the console MMOG party, just like they did for PC gamers. The only problem: There is no console MMOG party. Not yet. Blizzard has the bankroll (and the cojones) to wait it out and let the Webzens and Sigils do the dirty work of building the console MMOG market, while they quietly rub their hands together, plotting to eventually take it over. Now that the cat is out of the bag, and we know Starcraft 2 is not only not destined for consoles, but apparently the only major release Blizzard has planned for the next two years, it’s safe to assume a Blizzard console MMOG is at least a few years off. Which could put it up against a LOTRO MMOG for the consoles.

But for now, prospective console MMOG players have PSO and the promise of something great down the line. No wonder WoW has 8.5 million subscribers.