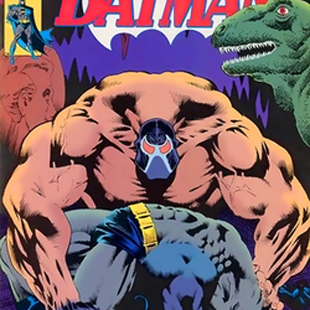 Batman versus a Lucha Libre madman and Superman killed? It was a crazy time.

Oh, the 90s. Time of grimdarkness and superseriousness. A time when the comics industry was finally getting respect, when popular movies based on comics were becoming a thing, geek culture was just beginning to become mainstream, and the medium as a whole was taken more seriously, as art, than at any time previous.

At the same time, the industry was changing. Publishers like Image were encouraging creatives to revolt against publishers who refused to allow them any rights to their creations, while the last vestiges of the Comics Code Authority were being swept away. In many ways, we’re still living in the aftermath of the period, for all the good and bad that entails.

But of course, there’s a lot of good, even if it’s bloated, ridiculous good. The 90s were also a great time for big budget, insane blockbusters and comics were no different. But where film produced giant, bloated, campy action movies, comics had special events that lasted more than a year. Giant crossovers, amazing shifts in content, and of course, earth shattering changes were rampant. They didn’t always work, but damned if they weren’t fun.

Since Comic Con is starting, and since the 90s is when Comic Con Really started to matter as a force in pop culture, now is as good a time as any to look back, and so let’s do just that with a close look at two of the biggest crazy, bloated events in comics history that practically defined all such events for the rest of the decade. 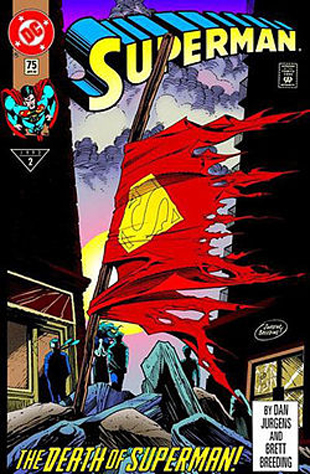 By the late 80s people had gotten it into their heads that comic books were intrinsically valuable, and like gold, or real estate, would be a safe, high yield investment for the future. No, I don’t mean comics as art, I mean the physical copies themselves. A speculative bubble grew around comics, with back issue prices skyrocketing, until the whole thing popped, thanks to Superman.

The death of Superman was the result of corporate synergy so complex new forms of math are needed to make sense of it. Superman was rebooted in 1986 by writer John Byrne. The new take emphasized Clark Kent as Superman’s real identity instead of the other way around, changed Lex Luthor into an evil businessman, and even ditched the idea that Lois Lane was obsessed with Superman in favor of having her friendship and professional relationship with Clark be more important. It was a success, but then Byrne got into a dispute with DC, and quit. Superman continued with a new writer but sales began to drop enough that DC became concerned.

DC decided an event was needed to boost sales, and in 1992 it settled on an arc in which Clark and Lois fell in love and got married. However, DC’s corporate parent, Warner Bros., had by this time began work on a tv show called “Lois & Clark: The New Adventures of Superman.” WB didn’t want the comic to beat the tv show to a Superman wedding, and DC complied, agreeing to delay the planned arc until the tv show got around to it. Yes, that is kind of icky.

But DC still needed an event to boost sales of Superman, and so it settled on the next best thing after marrying Superman off: killing him. No, seriously. The idea started as a joke by DC writers, frustrated by having to postpone their planned story arc for perhaps years, but DC editorial management latched on to it, and so in the fall of 1992, a new villain, an unstoppable kryptonian killing thing called Doomsday was introduced to the DC universe. Almost as if the writers wanted to telegraph the fact that they were killing Superman just to watch him die, Doomsday had no real qualities aside from being extremely badass and extremely angry. He landed on earth, began tearing up everything he saw, and even the combined might of the Justice League couldn’t stop him. 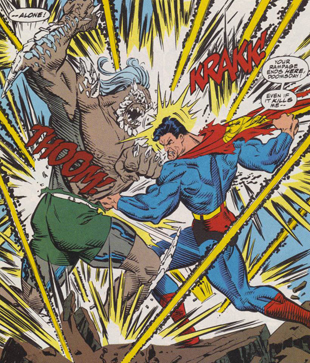 Doomsday eventually made his way to Metropolis, where he and Superman duked it out until both were dying. Supes died in Lois’ arms, and DC spent the next year milking the aftermath of his death for everything it was worth, with four new supermen, including fascist clone, a cyborg, a superboy clone, and John Henry aka Steel trying to claim aspects of Superman’s legacy. Until, of course, Superman was brought back from the dead.

It paid off handsomely for DC, until it didn’t. Superman vol. 2 #75, the issue in which he died, sold millions of copies, but most of those sales were to people who didn’t actually read comics, but thought the death of Superman issue would become valuable later (it wouldn’t). They didn’t stick around to see what happened next, and by the time Superman was brought back from the dead, sales had returned to their decline levels. Meanwhile, so many copies of The Death of Superman were printed that they had no value, and eventually people figured that out. It’s not a coincidence that speculative bubble in comics burst around the same time.

Now technically, this wasn’t an intentional follow-up to Superman’s death – the Batman writers had been planning this story since 1991. But coming as it did immediately after that event, it was seen, unfairly, as another gimmick designed to drive up sales. But bubble or no bubble, follow-the-leader event or not, Batman’s own mega-traumatic event, was a real blast. Plus, it involved a Lucha Libre-inspired villain, and a broken spine.

At the beginning of this story, we find Bruce Wayne burnt out and losing focus in his war on crime. Enter Bane, an insane, steroid-enhanced criminal genius who was raised in a Latin American prison and comes to Gotham, basically with the intention of defeating Batman permanently. Meanwhile, we also meet Jean-Paul Valley, a graduate student who turns out to have been raised as a member of an ancient order of assassins. (Though we don’t learn that initially. Just roll with it, ok?) 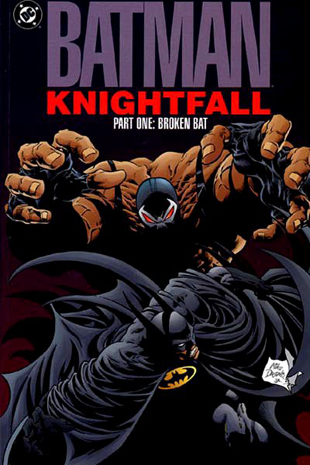 Jean-Paul becomes Azrael, an avenging superhero in training fighting alongside Batman. Meanwhile, Bane gets up to some serious business, spending many months on the pages of DC Comics doing stuff like freeing the inmates of Arkham Asylum and injecting them with experimental drugs. All the while, Bruce is still having his midlife crisis. Drama!

Bane’s intent is to soften up Batman by forcing him to fight through waves of enemies. Batman is for some reason bent on dealing with them alone, which drives a rift between him and Robin, and each time he defeats one of the released criminals he becomes weaker, until finally, Bane corners him, then breaks his back by slamming him down on his knees in the iconic pose we all groaned through in The Dark Knight Rises.

Batman thus paralyzed, he spends the next year trying to rehabilitate. Owing to his falling out with Robin, he asks Jean-Paul to fill in as Batman. Which works for a while, except for the whole havjng been trained as an assassin thing. At first simply a more hardcore Batman in a mechanical suit, he eventually becomes mentally unstable and increasingly violent. Sure, he manages to defeat Bane and get some payback for Bruce, but he also breaks Batman’s no kill rule when he lets the serial killer Abattoir die, and freaks out everyone who used to like Batman to boot.

Bruce eventually fixes his broken back thanks to, well, basically magic, and eventually is forced to battle Jean-Paul for the right to be Batman. Luckily, that Battle ends with Jean-Paul conceding defeat and leaving to wander the streets homeless and destitute. Weirdly, Bruce doesn’t turn him over to the police, because he felt guilty for having made Jean-Paul Batman in the first place which, well, doesn’t make sense but just roll with it.

The thing is, despite introducing awful characters like Bane and Abattoir, the story is actually awesome. Epic in scope, genrebending, and full of serious ramifications it took the series years to fully process, it managed to transcend the event-ness of it handily. And, let’s be honest: it also helped make Lucha Libre cool in the US. So yay.

Who Has the Best Adventure Outfit: Indy, Lara Croft, or Nathan Drake?

Explosions Seen over Gaza in “Saddest Photo Yet” from Space