It seems it’s still impossible to avoid zombies as far as cultural phenomena goes. First it was a sub-genre of horror, now it’s an all-purpose device to crowbar into any property in order to wring out some additional, off-canon fun times, as with Yakuza Dead Souls, Red Dead Redemption: Undead Nightmare and that Pride and Prejudice thing. In this column I’ve already covered my theories as to why zombies are so popular – to recap briefly, because they represent consequence-free fun violence, life after death and a new lease on life for people who long for the challenge of post-apocalyptic daily existence – so today I’d like to catalog a few updates to the zombie myth.

Zombies are basically part of the folklore of modern urban society. I look at the phenomenon of ‘zombie walks’ and I’m reminded of ancient tribal ceremonies in which the menfolk would dress as evil spirits from their campfire tales and run around hooting and smacking the children. A thousand years from now people will probably assume that zombies actually did exist from all the stories we tell about them, in the same way we tend to picture dragons and wizards actually existing in medieval times.

But! Folklore is an ever-evolving thing that is constantly getting bits stapled on and levered off in the unending process of linguistic Chinese whispers that occurs as the stories are passed from generation to generation. The whole vampire concept originated (according to one theory, anyway) from the practice of staking corpses in coffins through the heart so they don’t slide around when the pallbearers stumble. From that starting point poor Dracula has somehow accrued all this other baggage over the years: he hates garlic, can turn into a bat and all his kids hate him.

In the same way, zombies started out fairly simply as shambling grey corpses that endlessly hunger the flesh/brains of the living, and if they bite you you slowly die, then get back up as one of them. But with their endlessly being used in movies, TV and especially video games, the zombie myth has acquired a whole bunch of new ‘rules’ that are fast becoming the new standard. Rules such as:

1. Zombies will slap up a bitch.

Back in my day zombies would just try to clumsily grab you so that they can devour your flesh. Consequently it was fairly easy to shake off a single one of the buggers, but things get complicated when there’s enough of them to be a threat capable of holding you down. Now zombies run, and when they catch up with you, they actually try to punch you. Usually by flailing their arms really hard. Suddenly one lone zombie isn’t the laughable threat it used to be. This may be partly because zombies, especially videogame ones, kinda need more than one kind of attack if you want the protagonist to be injured without necessarily being infected.

More broadly, though, both running and punching are covered by the single point that zombies have suddenly gotten a lot more angry than they used to be. I always thought the idea of zombies, one of their scary aspects, is that they’re not the people they used to be, they’re just the reanimated flesh with no personality or emotion. I’m pretty sure anger is an emotion, guys. Or is this going to turn into one of those ‘they’re not zombies, they’re infected’ arguments? 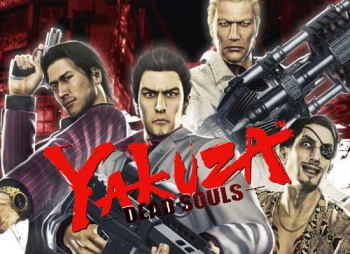 Something I noticed in Yakuza Dead Souls is that the city tends to get smashed up with alarming rapidity when sections of it fall to the quarantined zone. Seems like the zombies only need about five minutes behind the barricade to demolish several buildings and start fires everywhere. And I don’t know if you’ve ever tried starting a fire when (a) you don’t have matches or a lighter on you and (b) you’re braindead and your limbs are only good for madly flailing at things you no longer have the capacity to love or understand. We’re so used to associating zombies with post-apocalyptic settings that we forget to take into account the logistics of it all.

I mean, one would think it’d take a few decent last-stand battles and a good amount of time to let signs of neglect and lack of maintenance set in all over civilized society. Somehow I doubt it’d work like it did at the start of the Dawn of the Dead remake when the one lady comes out of her house after one night indoors and finds that her pleasant suburban neighborhood has turned into downtown Baghdad. The only explanation is that zombies can now also shoot lasers out of their eyes and their hatred of the living is matched only by their hatred of civil infrastructure.

3. There are always “special” zombies.

One could argue that this started with Resident Evil, but the implication there was that the “special” bigger and tougher monsters had had some different, more refined strain of the T-Virus, or were the result of using the stuff on living things other than humans. But I think it’s been since Left 4 Dead (and observed in such games as Yakuza Dead Souls and Dead Island) that it became accepted fact that a select few people mutate in interesting and curiously beneficial ways when exposed to the zombie virus. Becoming unusually vicious with big claws or really fat with toxic puke. Perhaps as a result of some rogue dormant gene, or perhaps this is just something that happens when you get infected while wearing a hoodie, or while eating pies.

Again, this is probably a consequence of videogame design, in that it’s necessary to mix the enemies up a bit now and then. But I think a secondary influence is that same nerdy mindset that is in some way looking forward to a zombie apocalypse (as discussed in my previous column on zombies). They see it as an opportunity for a new lease on life, allowing them to become the special heroes they’ve always pictured themselves as.

Sooner or later, though, even these people have to face the fact that it’s fairly likely that they won’t be one of the survivors in a zombie apocalypse scenario. I mean, an apocalypse depends on almost everyone being dead, so basic probability’s working against you. Fortunately, the special zombie system grants a secondary level of exclusivity for the apocalypse dreamer. As their flesh bloats hideously and bile gurgles in their throat, one could imagine their dying thought being one of total elation. “I get to be one of the fat pukey zombies! I knew I was special! The popular kids were wrong to shun me!”

Kinect Star Wars Is Number One With a Bullet