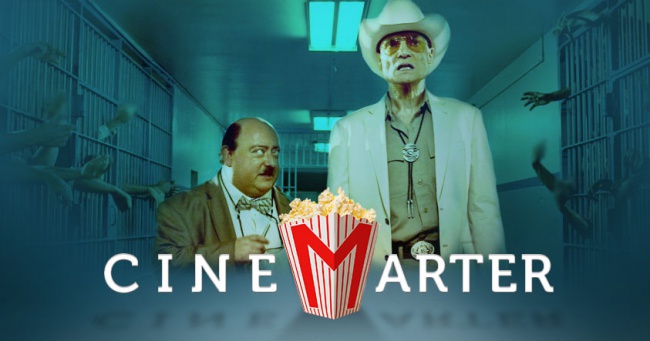 The Human Centipede franchise is one for which I’ve never quite understood the appeal – assuming “appeal” is even the correct word. The first film had a creepy leading performance from Dieter Laser, and I suppose the premise was something we hadn’t seen before, but for all the hype, the shock horror just wasn’t all that good, and it got dull really quick. The second one, filmed in black and white, went for a more meta approach, but basically copied the first film’s plot and was even duller – yes, even though the titular human centipede was larger. Now, we have a third film in this trilogy, and it’s just as bad, if not worse, than the previous chapters, except this time with a more annoying protagonist and a more self-indulgent, self-congratulatory tone.

The plot of The Human Centipede 3 (Final Sequence) will not surprise those of you who had the misfortune of sitting through the previous two films. A man – in this case, a racist and homophobic prison warden named Bill Boss (Dieter Laser; yes, the lead of the first film) – after much meandering around, winds up building a human centipede, which consists of joining the digestive tracks of multiple human beings and sewing them together anus-to-mouth. The idea this time around is conceived by the warden’s accountant, Dwight (Laurence R. Harvey, lead of the second film), who is a big fan of the first two Human Centipede movies, much like the protagonist of the second film was a fan of the first film. The meta is strong in this one. 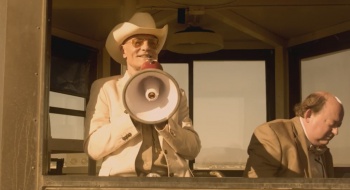 In fact, the meta is so prevalent that Tom Six, the director and writer of the trilogy actually makes a cameo appearance, one in which all three characters gather around a table and talk about how great the previous two movies are. We’re supposed to be laughing at how self-congratulatory this is, but in reality I was more disgusted by this portion of the film than when the human centipede was being created. In case you’re keeping score, the first film used three humans, the second film used 12, and this one uses something like 500. Oh, and a “human caterpillar” is also created, because why not?

The more you see something, the more mundane it becomes – and we’ve seen this too much for it to still have much of an impact.

After three films, is this premise still shocking? Sure, Bill Boss’ rants are despicable, and creating a human centipede is disgusting, but we’ve seen the latter before, and the former becomes more tiresome than offensive. The worst part about this franchise is how boring they all are. Once you’ve seen this once, adding on more pieces doesn’t really change anything. The plots are very similar, the characters are creepy but nothing more, and there’s nothing to really take away from them apart from the “that’s gross” factor. The more you see something, the more mundane it becomes – and we’ve seen this too much for it to still have much of an impact.

Dieter Laser was the highlight of the first Human Centipede film, turning in an incredibly creepy performance in the leading role. He could make your skin crawl every moment he was on-screen. Here, he’s too hammy and over-the-top to do that, even though he tries really, really hard. There isn’t a politically incorrect phrase he doesn’t use as Bill Boss, and there’s no action he won’t take in hopes of getting a rise out of an audience. It’s tiresome, much like the entire movie – and much like the entire franchise. Laurence R. Harvey was also creepy when he was the lead of the second film. This time around, he’s just kind of there. Eric Roberts, who many years ago was nominated for an Oscar – something that Academy probably regrets at this point – shows up for a couple of scenes as a Governor who’s not exactly fond of Boss and his prison. Bree Olson probably turns in the “best” performance, even if that isn’t saying much. Everything is just awful. 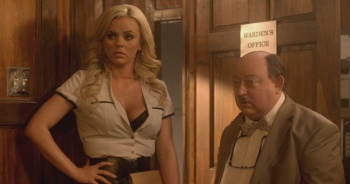 About the only positive I have to say about The Human Centipede 3 is that, somehow, it’s still funnier than Paul Blart: Mall Cop 2. It’s not much better, rest assured, but I got at least one laugh from this one, so technically it wins, I guess. That’s something, right? Sure, they’re both atrocious pieces of cinema that nobody in their right mind should see, but at least this one contains at least a single laugh during its running time. So, congratulations, Human Centipede 3; you are not worse than Paul Blart: Mall Cop 2.

Really, though, there’s nothing to like about The Human Centipede 3 (Final Sequence). I only hope that the “Final Sequence” part of that title winds up being correct. We don’t need more Human Centipede movies. We didn’t need these ones. Maybe the first works as shock horror – it didn’t for me, but that probably tells you more about me than it – but the second and third didn’t work at all. Tom Six needs to move on and work on something new.

Bottom Line: We didn’t need a new Human Centipede, particularly one that’s as dull and self-congratulatory as this one.

Recommendation: Shock horror fans have hopefully already moved on, but if you haven’t, now’s the time to do so.