There’s something fascinating about in-game arcade machines, whether they’re playable or not. Even if they’re little more than an attractive chunk of scenery, they offer a tantalizing glimpse into a game’s wider world, especially if they exist only in the imagination of the game’s designer. Everyone and their dog has heard of Pac-Man and Street Fighter II, but what fictional divergence led to Super Turbo Turkey Puncher 3 and Gobble Boy?

So, given that The Last of Us Part II contains such quality gags as a “Smash Brandi’s Cooch” (a mucky play on Crash Bandicoot), you might expect its arcade to be wall-to-wall puns, an oasis of humor in a desert of horrible, unrelenting misery. Instead, there’s another reason that its amusement arcade stands out, and I’m not talking about the bloater that lives in the basement. Part II’s arcade is both a monument to moving on and a heartbreaking reminder of the happiness Ellie once had. It’s doubly distressing if this is your second playthrough and you’re all too aware how Ellie’s story is going to end.

To underline why the arcade is so important, you have to revisit The Last of Us: Left Behind. This mini-episode gives us a glimpse of Ellie’s life before Joel and of her relationship with fellow survivor Riley, before Riley succumbed to The Last of Us’s infection. A significant chunk of the DLC occurs in an amusement arcade and displays the lengths Riley is willing to go to bring Ellie joy. 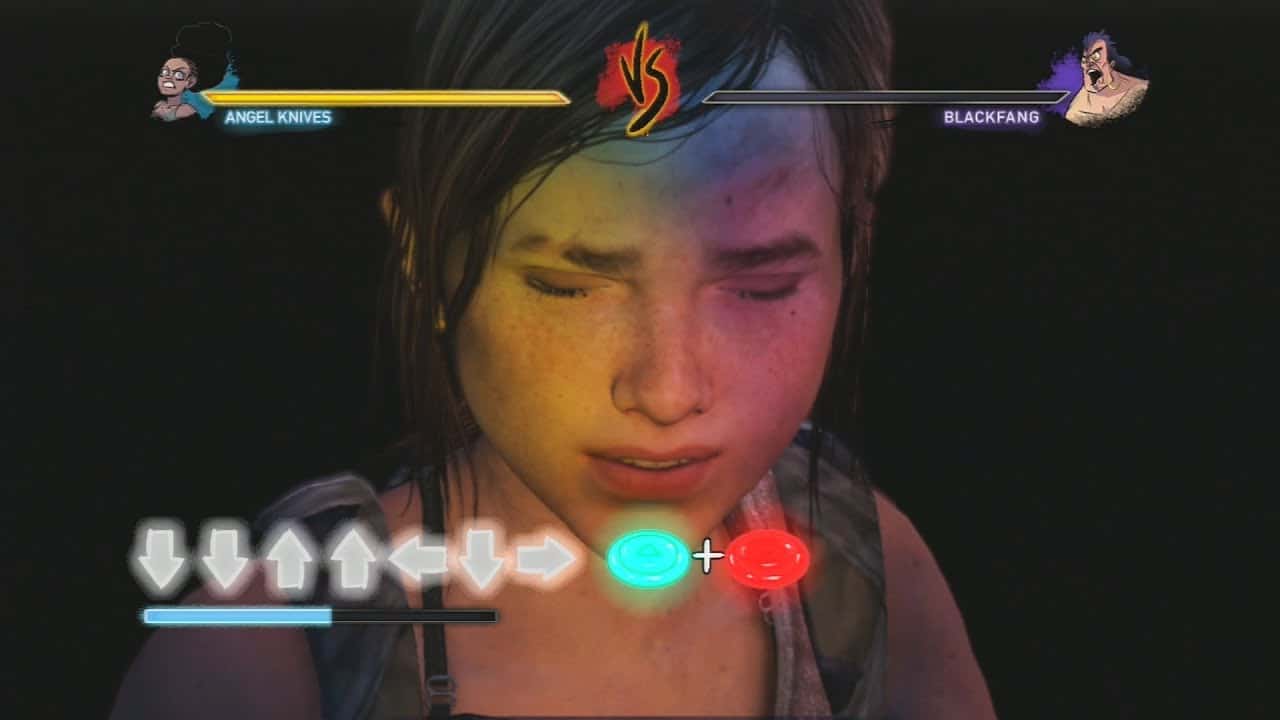 Have you ever walked into an arcade and been dazzled by the lights, sound, and sheer array of games on offer? Now imagine having never, ever seen such a spectacle before in your life. This is the glorious sight that greets the pair after Riley restores power to the mall they are visiting. But the brawler she wanted to experience, The Turning, is broken.

Undeterred, Riley has Ellie close her eyes and, narrating each action, conjures up a whole imaginary match, right down to dictating the attacks she needs to use, concluding in an appropriately gruesome fatality. Ellie’s joy is palpable, and shortly after, the pair kiss and resolve to continue their lives together. Even though they are the only two present there, The Last of Us’s world never seemed more alive.

By contrast, The Last of Us Part II’s arcade is a dead place, drowned by Seattle’s rising flood, with no prospect of any of the machines springing to life. So, when you walk upstairs and are faced with a dusty, deactivated The Turning machine, it’s an emotional gut punch. If you weren’t already associating the arcade with the last time Ellie saw Riley alive, you sure as hell are now. Even without the screen’s blue static, you can picture the pair standing there — Ellie with her eyes closed, Riley passionately fabricating the on-screen action. 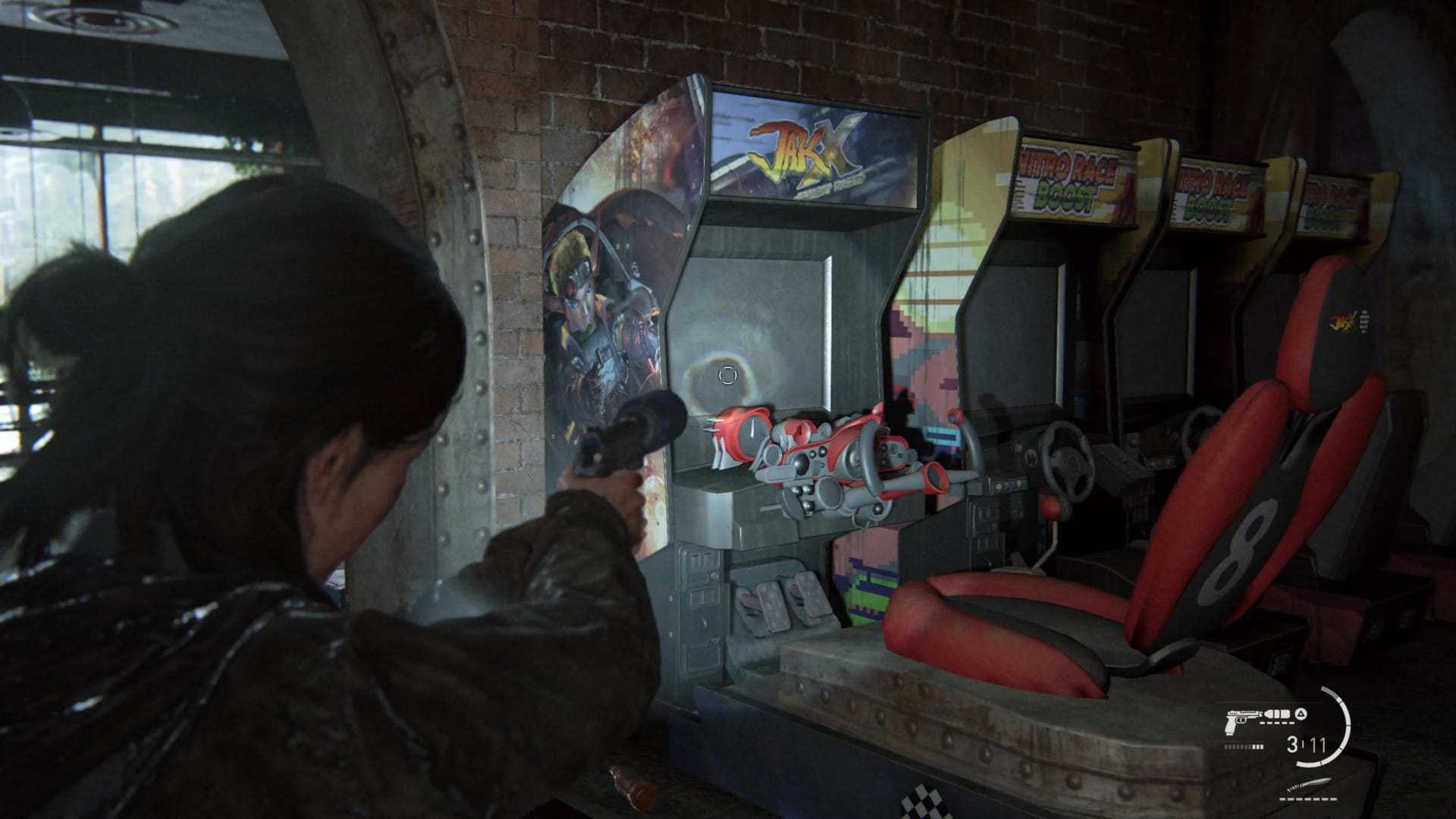 Sure, Naughty Dog always meant for Riley to die, but playing Left Behind and knowing what Riley meant to Ellie, there was that nagging feeling that there was something you could have done, if you’d turned left instead of right. There’s a hugely satisfying video that has Ellie unleashing infinite fire arrows against the infected horde to protect her girlfriend Dina, standing her ground instead of running. Playing Left Behind I craved something similar, that I could beat the horde back and give the pair the happy ending they deserved.

But while I may not have gotten over Riley’s death, Ellie apparently has, as much as anyone ever can, or the pain has diminished to the point where it’s no longer omnipresent in her life. As she roams the arcade, she barely utters a word, nothing to acknowledge the ghosts that this place might conjure up. Stand her in front of The Turning, and it’s as if you could cut the atmosphere with a knife.

Even innocuous but absurdly monikered machines like Baboon Wrench Jeffrey are callbacks to Left Behind, but she doesn’t reach forward to touch any of the machines or close her eyes and remember her time with Riley. If any memories, harrowing or otherwise, do bubble to the surface, she hides it well. 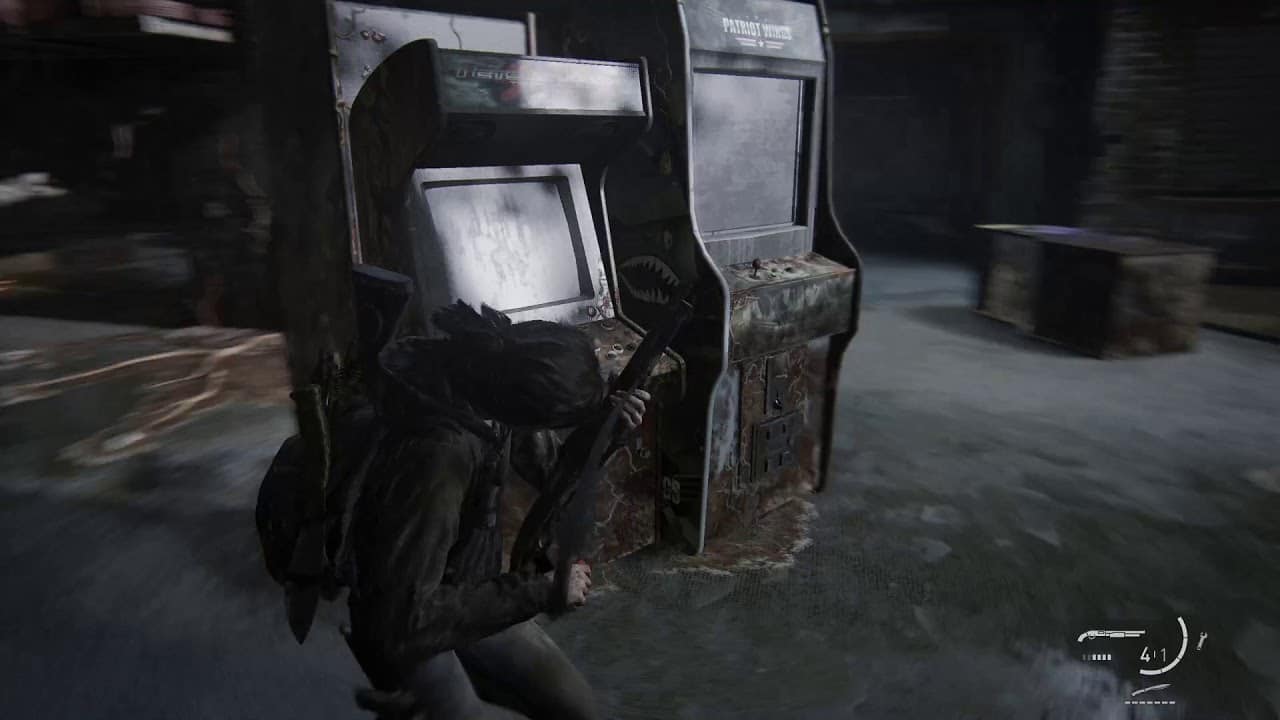 Ellie’s inaction might seem like a disappointment, whether it’s intentional or by omission on Naughty Dog’s part. From a design standpoint, only those who’ve played Left Behind would know who Riley was, so including a specific reference to her might have led to questions from new players. But for those of us who witnessed the pair’s joy and wanted something better for them, the presence of The Turning is enough of a nod from Naughty Dog.

Sure, you could play the “entitled gamer” card and petition Naughty Dog to patch in a scene where Ellie leaps onto the waterlogged Dance Dance Revolution-a-likes and struts her stuff alongside a spectral Riley. But doing so would be wholly unnecessary; her silence speaks volumes. And it’s the perfect closure for us, that, while Riley hasn’t been forgotten, her loss no longer haunts Ellie as it once did. It means she has the room to move on, to find happiness with Dina. She still knows what’s inside her head could have saved the world, but a fixation with death or joining Riley in death no longer drives her. In theory, it’s a note of hope that, at least, she has the freedom to just live her life.

But even as you walk Ellie out of there, you’re struck either by the terrible foreknowledge of what’s about to happen or, if this is your first playthrough, the stomach-churning feeling that Ellie’s quest is doomed, that with one loss behind her, she’s now being driven to destruction by another. Because the arcade is more than just a negative image of Left Behind’s palace of fun — it’s also The Last of Us Part II in a nutshell. The Last of Us, for all its sins, had an undercurrent of hope, right up until Joel’s final, selfish decision. Part II is so vengeance-oriented that, as it nears its conclusion, it veers dangerously close to parody, and it’s as grim and gloomy as that arcade.

Ellie may have moved on, but it’s too much to hope that she sees where her path is taking her.