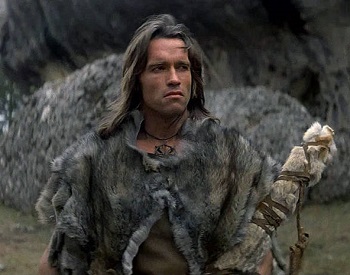 Producers Chris Morgan and Frederik Malmberg say that The Legend of Conan is getting closer to production and will “live up” to John Milius’s 1982 original.

Back in 2012, Arnold Schwarzenegger signed on to star in a new sequel to Conan the Barbarian. It was a move that elicited mixed reactions from fans of the original. While some were looking forward to the prospect of Schwarzenegger returning as an older, wizened version of the character he brought to life back in 1982. Sadly, the intervening years since the original announcement have yielded little in the way of news indicating that the movie, dubbed The Legend of Conan by Universal, is actually moving forward. That being the case, a series of recent interviews with the film’s producers would suggest that the film is indeed inching toward production.

According to producer Frederik Malmberg, Universal Studios has begun scouting out filming locations and has visited “versatile landscapes” in Spain and Colombia. He would go on to affirm that the studio’s goal is to produce a sequel that feels like an authentic extension of the original, right down to its R-rating. “Our marching orders from the studio were to create a film worthy as a successor to the 1982 film, which was pretty brutal,” he said. “To Conan it’s not about fancy sword moves; it’s about the fastest and most effective way of disposing of your enemy…Conan is beloved because of his political incorrectness. He doesn’t think, he just acts. People can relate to the freshness of somebody who doesn’t give a damn about civilization.”

Legend producer/co-writer Chris Morgan offered up a similar sentiment, describing the original movie’s director John Milius as a “visionary” and saying that he hoped to “live up to” the world he created with in Barbarian. “The goal, the dream, is to live up to his world. To make it worthy. And to expand on it in a truthful way that audiences will embrace. We’re very lucky that the architects of this new film – the writer, the producers, the studio and most of all, Arnold – who is Conan – are all first-generation fans who either worked on the film or who came along for the ride, cheering from their theater seats opening night.” Morgan confirmed that at least three characters from the 1982 film would be returning for Legend..

Offering further commentary himself, Schwarzenegger said that it was “honor” to be asked to return to the franchise and that its backers at Universal have been enthusiastic in their efforts to reinvigorate the franchise. He confirmed that he’ll be receiving and reading the “final script” shortly.

The Highs and Lows of Gaming in Virtual Reality