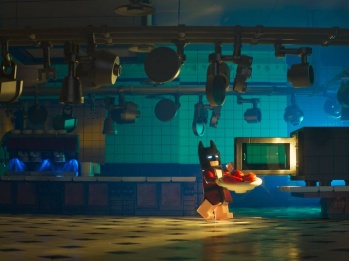 Will Arnett broods in the Batcave and cooks microwave dinners in the latest LEGO Batman Movie images.

With all the fuss over this week’s Batman v Superman: Dawn of Justice, it’s easy to forget about the other “No Parents” hero movie Warner Bros is working on. That’s right, there’s just under a year until The LEGO Batman Movie arrives, which means it’s time for some behind-the-scenes sneak peaks. Today, that includes some glimpses of a LEGO Batman, and conversations with Will Arnett about what to expect from his block-based Batman.

“The Batcave is even better than we remembered it, it’s awesome,” Arnett told USA Today. “But I also love getting into the ho-hum day-to-day of being Batman and what it’s like to fight crime each day. Like the idea of Batman oversleeping his alarm clock makes me laugh. It really does humanize him.”

The LEGO Batman Movie treats its hero as a solitary figure, with only Alfred (Ralph Fiennes) to keep him company. That all changes when he’s introduced to Dick Grayson (Michael Cera) and Barbara Gordon (Rosario Dawson), who proceed to introduce him to the idea of a superhero community.

“We thought if we can tell a well-rounded, funny story that’s action-packed, we can build a big movie around this character,” director Chris McKay explains. “Batman is an island onto himself, the only thing he doesn’t have is relationships … We’re making About a Boy as directed by Michael Mann.”

Arnett is also joined by Zach Galifianakis as the Joker and Mariah Carey as Commissioner Gordon. “We’re nothing but exhaustive about the cameos and other characters that try to enter Batman’s life,” director Chris McKay adds.

The images themselves provide a few glimpses of Batman’s everyday life – brooding in the Batcave, rushing off to fight crime, and carefully preparing a microwave dinner. We’ll be seeing more tomorrow when The LEGO Batman Movie gets its first trailer alongside Batman v Superman‘s release. The LEGO Batman Movie arrives on Feb. 10 2017.

Hyper Light Drifter Will Release Next Week on PC