The Magic Circle perfectly captures the sense of being inside a broken game. Across the entire world are design flaws, developer notes, and effect placeholders that were meant to be completed on some future date. Pausing the game teleports you inside the developer options menu, NPCs display code you can modify, and your Steam name is integrated into the game. But instead of being broken – like some actual Early Access games – The Magic Circle treats busted mechanics as challenges to overcome, using engine bugs and design tools instead of weapons and spells. 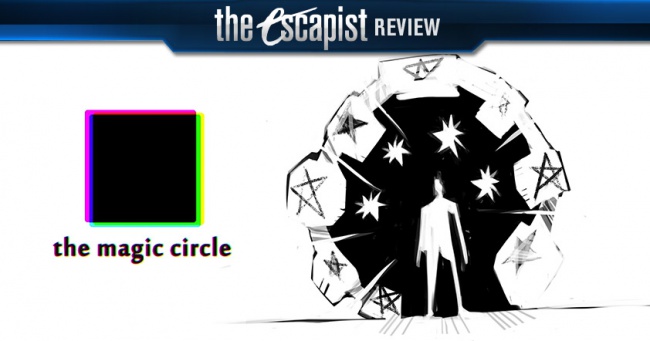 Many years ago, an up-and-coming writer developed a text-based video game that became an instant smash hit, prompting him to form a new gaming company. Decades later, this company has completely failed to release the anticipated sequel, constantly restarting the development cycle when the slightest problem arises. Only an unfinished and broken demo filled with placeholders exists after years of effort, and barely anyone on the team believes the game will ship – or that it ever should.

You are an Early Access playtester for the game’s demo (a joke that was likely funnier during actual Early Access), and it’s clear this game is impossible to salvage. But then you’re contacted by Pro, an AI trapped inside the game who gained awareness during an early iteration. Pro is tired of living in an unfinished world caught in the whims of frustrated developers, but doesn’t have the power to change anything. So he needs your ability to take advantage of bugs and imbalances to complete The Magic Circle from inside the game – and maybe embarrass the developers who started this mess along the way.

It’s no surprise that The Magic Circle is receiving glowing praise from the gaming press. Even if it wasn’t a novel concept executed to near-perfection, it’s also a cutting satire about the game industry. The Magic Circle sums up almost everything that journalists and fans have raged about for years – including broken E3 promises, outrageous development cycles, and the damage caused by dysfunctional development teams.

But what makes The Magic Circle special is that it’s still an absolute joy to play. Instead of making points about games by limiting your freedom, The Magic Circle explores its subject by giving players complete freedom to create their own solutions. That’s a difficult feat for any video game – let alone a meta-game – but Question pulls it off so effectively that it almost looks easy.

Take Ghosting, a “design flaw” where nothing which dies in-game is properly erased from the system memory. So when you die, you become a controllable ghost which can interact with objects also in a ghost state. Then there’s Trapping, where the player harnesses the ability to create graphics engine errors – a useful tool for glitching enemies in their tracks before they can reach you.

But hands-down, the most fun comes from editing in-game objects. Almost everything you encounter – from enemies, to friendly NPCs, to inanimate rocks – can be accessed and edited from an in-game developer menu. Take the Howler creatures. These are standard enemies early in the game which have been programmed to hunt and attack the player. Pretty boring stuff, until you access their attributes and game code. Suddenly you can reprogram them to treat you as friendly, swap out their ground-based movement for flight, even equip them with attacks from other NPCs, up to and including flamethrowers or laser guns.

Having these NPC “pets” at your beck and call is the most charming part of The Magic Circle. Every change you make to their code is reflected in their models, from unique weapons to green eyes denoting their ally status. Even better, you can rename every single NPC. (One of my favorites was the alien worm “Xenoey Deschanel” who pulled me out of a few tough spots.) The downside is that having dozens of allies gets overwhelming, especially since each has their own sound effect that overlaps into a chaotic mess of noise. Thankfully you can try to lose them in the map and summon them when needed – or tearfully send them into a lava flow promising you’ll resurrect them later. (I’m so sorry, Peter Cyber-Rat.)

When combined, these bizarre mechanics lend The Magic Circle a sense of freedom. Each obstacle you encounter has multiple solutions – perhaps even ones the developers never considered – that you can MacGyver together with glitches and NPC traits. Want to reach a distant cliff? You could throw something with a teleport trait to the other side to beam you over. Or set up a tractor beam that targets the player to carry you. Or give an enemy a repulsor weapon that sends you flying in that general direction. And that’s just one puzzle. You’re only limited by your imagination and willingness to try something a little unusual.

What’s more, there’s a very clever emergent story built into the game as well. As you explore, you’ll come across in-game commentary and office recordings from a time when everyone expected The Magic Circle would be finished, revealing how everything went wrong. The voice cast is an absolute dream here, from a bitter pro gamer trapped in the company by binding contracts, to a loyal fangirl who worships the original game and its creator. Each character also appears in-game as giant floating eyes to create new challenges that frustrate the player, but as you learn more of their backstories they reveal surprisingly sympathetic characters.

But the best performance, hands-down, goes to The Venture Bros.‘ James Urbaniak who plays The Magic Circle‘s lead designer. If you’re familiar with his work as Dr. Venture you know this was an inspired choice, wonderfully capturing the drive of an optimistic creator with the pride and hubris that drives him to self-destruction. More so than any other character in this game, you’ll hate him one moment only to feel sorry for him the next – to the point that you’ll probably despise yourself a little for destroying his dreams.

On the downside, a lot of The Magic Circle‘s allure evaporates in the final levels. Oh, there are still clever twists on the mechanics, like sabotaging a live E4 gameplay demo or taking complete control of level creation tools. But for the most part, these scenes are hamfisted ways of forcing messages into the story, lacking the playfulness and subtlety of earlier levels. They aren’t bad morals – especially in our current games industry – but they’re obvious and drag on for too long. I mean, The Magic Circle has three or four end game climaxes that should’ve been condensed into one – that’s going to strain anybody’s patience.

Criticisms aside, I still lost several hours to The Magic Circle, looking up to notice it was well past dinnertime. And that’s counting the endgame sections which felt out of place with everything that came before. Players looking for something more casual to pass the time may not be the mood to stretch their creative muscles, but The Magic Circle is one of the most wonderfully unique games we’ve seen this year. If you love games at all – or just like poking fun at how they’re made – you cannot miss this gem.

Bottom Line: The Magic Circle is the best “broken” game you’ve ever played – and a rich satire of the industry to boot.

Recommendation: The hype is real. Play this game.

Unlock Cheats With Every Godly Possession in God of War 3: Remastered

Wreck-it Ralph 2 is in Development