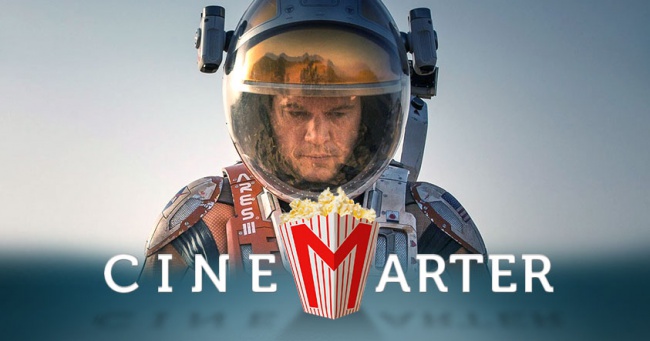 The last few years haven’t been kind to director Ridley Scott. With failures like Exodus: Gods and Kings, The Counselor, Robin Hood, Body of Lies, and A Good Year, it’s easy to think that he’s lost it – that he’s no longer capable of creating films as good as those earlier in his career – efforts like Blade Runner, Alien, and Legend. It is with The Martian that Scott turns his critics on their heads and shakes out their lunch money, once again asserting his dominance in the field of cinema. He’s still capable of making fantastic movies.

The Martian has a very simple premise that is executed tremendously. During a manned mission to Mars, a storm hits and forces the crew to evacuate in an expedited fashion. One member, Mark Watney (Matt Damon, who can’t catch a break in space), is hit by debris and is presumed dead. But, the next day, he wakes up to learn that he is very much alive. But he has no means of escape, no way to communicate with anyone, and will run out of food far sooner than it would take for a new crew to reach him. He is stranded as far from home as literally anyone in the history of the human race has been.

That’s it. Eventually, communication is established and rescue plans are conjured, although the chances of any of them working are slight at best. For the movie’s first half, and perhaps longer than that – I was too engaged to even dare look away to check the time – we simply follow Watney as he tries to solve the problems I mentioned above. While on Earth, we follow NASA director Teddy Sanders (Jeff Daniels) and Mars mission controller Vincent Kapoor (Chiwetel Ejiofor) as they weigh the pros and cons of various potential solutions. Watney’s crew isn’t told that he’s alive. 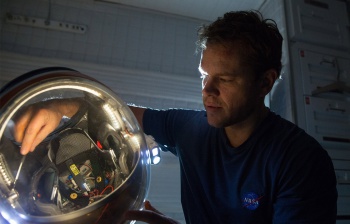 While most movies about or set on Mars tend to focus on elements other than their science fiction, The Martian is dead-set on being a hard sci-fi movie. Outside of a thrilling but more “Hollywood” conclusion, it doesn’t focus on action or special effects. It is about a smart man trying to survive on an uninhabited planet, other smart people on Earth attempting to rescue him, and a lot of believable science being thrown in our direction to try to solve various problems that both sides are facing.

Perhaps the most amazing thing about The Martian is that it remains both tense and thrilling for the vast majority of its running time, and a large portion of its dialogue involves scientific things that, if heard on the street, the layperson wouldn’t have a clue what was being said. But in the context of the film, it all makes sense. Scott, working from a script by Drew Goddard – adapted from a novel by Andy Weir – makes sure that the audience is always engaged in and aware of what’s being said. When benefits are being weighed against drawbacks, we feel as if we could chime in and try to influence the characters’ decisions. It’s science-heavy, but it’s not going to alienate the audience because of this.

The Martian is the best hard sci-fi space movie in quite some time.

The science also doesn’t get in the way of the very human story at play here. Every scene has something to say about humanity. Watney keeps logs of his time on Mars, which share with us his inner thoughts, while, on Earth, the dynamics at play between the various individuals are incredibly revealing. Perhaps because of the setting and the fact that it shares two of the actors, The Martian gave me flashbacks to Interstellar, which tried and failed to understand human emotion. The Martian contains more genuine insight into humanity in its first fifteen minutes than the seventeen hours it felt like Interstellar was playing. You can feel the heart of this movie pouring through, organically, from start to finish; it doesn’t need an out-of-place speech about the power of love.

This feeling is likely due to The Martian‘s sense of humor, how its characters, while mission-focused, don’t forget to have personalities, and how space is celebrated, even when the worst-case scenario happens. The Martian is very funny, in large part because of the charm of Matt Damon and some of the one-liners he’s given. Even though he knows that dying on Mars is highly probable, he doesn’t forget to show us a strong personality, something that can be said of every character in the film. All of his crew members, who are barely on-screen for more than half of the film, establish themselves as distinct individuals. Even the smallest of roles on Earth have enough depth to allow you to remember who everyone is and figure out what they’re thinking at any given moment – even without them having to say it. The character work in The Martian, in spite of its large cast, is top-notch.

That cast, by the way, contains the likes of Jessica Chastain, Michael Pena, Sebastian Stan, Kate Mara, Sean Bean, Kristen Wiig, Benedict Wong, Donald Glover, Aksel Hennie, and Mackenzie Davis, in addition to Damon, Daniels, and Ejiofor. That’s a lot of characters to balance, and despite some of the lesser-known actors only getting a few scenes or a handful of lines of dialogue, they’re memorable. This is, however, Damon’s movie, and he gets to show a range that we don’t get to see very often. Damon reminds us here why he’s a Hollywood A-lister, demonstrating the fear, the desperation, the loneliness, but also the slightest bit of joy that comes from his situation. His charisma keeps The Martian from ever feeling dull; even when little is happening, it is fascinating to watch Damon perform.

The Martian is the best hard sci-fi space movie in quite some time. It’s better than Interstellar, it’s better than Gravity, and it’s even better than Moon. In fact, if one were to try to describe The Martian, it’d be “Interstellar crossed with Moon, with a little bit of Cast Away thrown in for good measure – but better than all three of those.” This is a fantastic film about science and humanity, all packed neatly into a thrilling, engaging, beautiful, and surprisingly funny package. This is the reason we shouldn’t give up on Ridley Scott.

Bottom Line: The Martian is a fantastic film, an easy contender for a 2015 Top 10 spot, and the best effort from Ridley Scott in a long, long time.

Recommendation: Everyone should see The Martian. It’s wonderful.