A brief history of Titan Quest: It bombed. Before it even landed on store shelves, it had earned a reputation, wholly undeserved, as not just a bad game but a horribly buggy one. Its failure catalyzed the downfall of Iron Lore, the studio that created it, less than two years later.

But then a funny thing happened. A community began to form around the game. A small handful of stalwarts who knew and loved Titan Quest from its early days was slowly but steadily reinforced by others, like me, who picked it up because it was cheap and were surprised to discover just how well-crafted it really was. Titan Quest: Immortal Throne, the one and only expansion, was released in March 2007; Iron Lore breathed its last in February 2008. Yet the Titan Quest community lives on even today, making mods, posting videos, writing tutorials and discussing every aspect of the game, a small but dedicated and very active group.

That’s the sort of story that gives heart to people like Arthur Bruno, the former lead gameplay designer at Iron Lore who is now the manager and lead designer at Crate Entertainment, which he co-founded in early 2008 with former Iron Lore art director Eric Campanella. “I knew we designed a lot of replay value in TQ but honestly I would not have guessed that the game and community would have endured so long and remained so active,” Bruno said in a recent Q&A. “The big surprise was last autumn when the number of active users on the titanquest.net forums actually started to grow. I think it’s sad that such a loyal community has gone so long without another game in the series.”

So loyal, in fact, that when Crate’s debut project Grim Dawn came to light, Bruno, an active member of the aforementioned forums, started receiving messages from fans who wanted to help out. A lot of messages. “Our plan was to just do a stealth launch of the website and start slowly building up traffic but this just sort of took off,” he explained. “We actually put up the pre-order in response to continuous emails we had received from fans who had heard about the project and wanted to donate in some way. The idea really originated with those emails from fans and we can’t claim much credit for the initiative behind this funding model.” 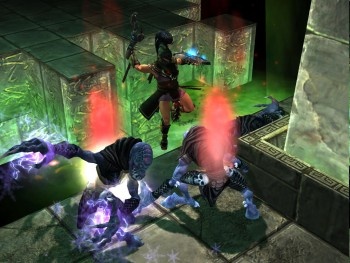 That funding model is what Bruno described in the Grim Dawn forums as “crowd contributed.” The idea is simple: Give a dedicated community of fans the chance to kick some money into the development process through a very early pre-order option, then use that money to add some extra zing and throw a few bonuses to early supporters. Everybody wins, he said: “The core fans who would buy the game anyway will be getting more and the extra content and polish will hopefully add value to the game that results in extra sales for us that we might not have otherwise made.”

“Crowd supported” is obviously akin to “crowd funded,” but Bruno pointed out that the latter description of Grim Dawn on some sites is inaccurate. While the response from the community has been “overwhelmingly positive,” near the end of January he estimated that contributions up to that point would account for less than three percent of the game’s total budget. “Though the number of pre-orders has risen above our expectations, it is still only a very small percentage of our total project budget,” he explained. “We’ve seen sites touting this as a new ‘crowd-funding’ model. The volume is certainly not that high yet and we really see this as just a way to budget in some additional content.”

So why not go fully crowd-funded? For one thing, the idea didn’t occur to anyone until the game was several months into development, but, more practically, there’s just not enough crowd to provide the funds. “We’re talking about hundreds of people pre-ordering thus far, not the tens of thousands it would take to fully fund a project of this size,” Bruno said. “It is enough money to add a little bit of content to the game and we’re happy with that but it certainly isn’t anywhere close to fully funding development.”

“I think it would be tough to begin a project reliant on a pure crowd-funding model from the get-go, especially without the unusual dedication of the Titan Quest community,” he continued. “There are a lot of upfront costs that occur with opening a business and beginning a new project such as legal fees, software licensing, etc. How would you get people to donate to an unknown project/team before you had any work to show?”

Which of course leads to the obvious question: What happens to all that pre-order money if, despite everyone’s best efforts and intentions, the project falls through?

“On one hand, given the nature of our company and very low burn rate, it is very unlikely that we’d simply go bust. The project is of a small scale that we believe we can complete on our own dime and with our own sweat. Any additional funding is a bonus that could allow us to expand the amount of content in the game,” he said. “On the other hand, if we plan to use pre-order money to help pad out our content, then once the money is spent on development of assets, it’s gone. Should we somehow manage to bankrupt ourselves, we obviously won’t have the money to be issuing refunds.”

His advice? If you’re worried about the risk, don’t take it. “If people are really nervous about this potential worst-case scenario, I’d rather they hold onto their money until a later date,” he added. “We don’t want to cause anyone unnecessary anxiety over this.”

Ironically, most of the anxiety appears to be coming not from gamers but from the companies that process the Grim Dawn pre-orders. Merchant service companies get antsy about taking money for a product that’s such a long way from completion, because of concerns about potential chargebacks. Bruno said the original Grim Dawn pre-order page was actually taken down only a couple of days after it went live, because the first merchant services company Crate teamed with got cold feet. It was gone for almost two weeks before another, more reliable company was found to step in and take over. The community, on the other hand, appears considerably more enthusiastic.

“It never dawned on us that so many people would be willing to support us in this way before even seeing anything of substance. Even more surprisingly, most of the pre-orders have been for the most expensive version,” Bruno said. “We priced it thinking that only a small portion of fans would buy it and that would help keep our alpha release from being too large. So that didn’t quite go as intended, but I can think of worse things to complain about.”

Crate has set its sights high: The Grim Dawn website says the game will “attempt to perfect the magical formula of exploration, character advancement and loot collection pioneered by Diablo.” And while you’re not liable to see Blizzard offering pre-order sales to help punch up Diablo 3 anytime soon, it’s not too much of a stretch to envision this sort of user-supported funding becoming a common practice for small indie developers. After all, as Bruno noted, the idea of offering Grim Dawn pre-orders was inspired in part by the success of a similar program from fellow indie studio, Unknown Worlds, for the upcoming Natural Selection 2.

Grim Dawn is expected to launch sometime in 2011, and Bruno is hopeful that its future will be long and prosperous. “If Grim Dawn is a success, I think we’ll be working on that franchise for years to come,” he said. “One thing at a time, though.”

Andy Chalk put his pre-order in yesterday. Want to help out? Learn more at grimdawn.com.

Analyst: EA “On the Right Path”