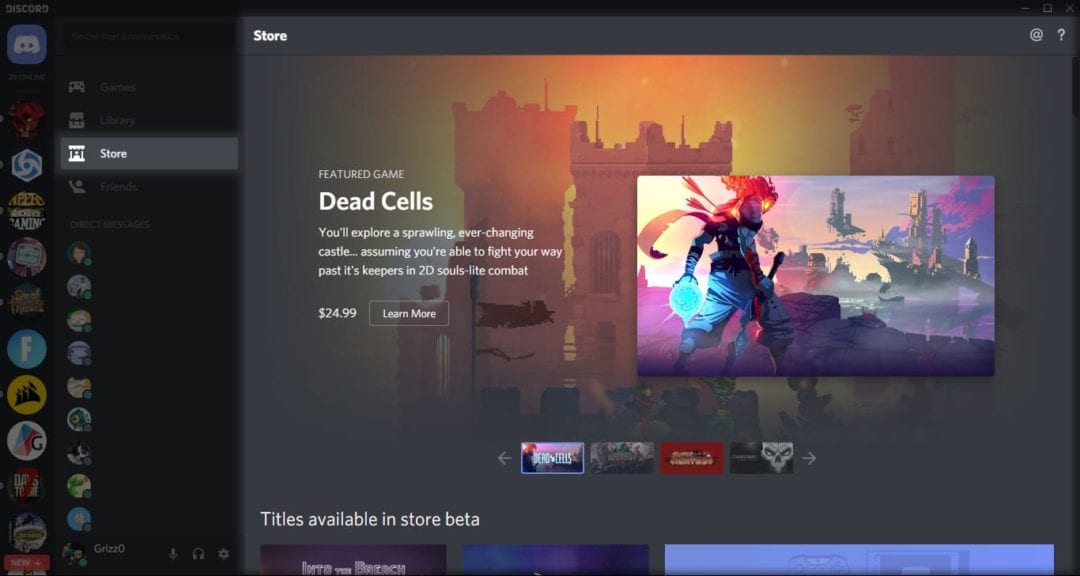 Steam has a new competitor, and this is the most promising one so far.

I love the PC digital games market for the way it operates as an anarchic free-for-all. There’s no corporate gatekeeper at the top like you get on the platforms owned by Microsoft, Sony, and Nintendo. Those companies keep their own walled gardens of digital content, but in the PC world it’s a Wild West scenario where any rando can open up a website and announce they’re now selling games. (Assuming that rando has millions of dollars to fund software development and server infrastructure.)

Steam is the dominant platform for digital games on the PC, and it wasn’t started by some monolithic corporation. Valve software was just a game developer with one really successful game under its belt. Fifteen years ago they launched Steam, and in the space of a few years it went from being a scrappy novelty to being the preferred way for PC enthusiasts to obtain games.

Before we go any further I should clear something up. Whenever I bring up Steam in an article I’m always treated to the “monopoly” argument, and after a decade it’s getting to be tiresome. The argument goes like this: One person says they hate Steam because it’s a monopoly. Another person replies that it can’t be a monopoly because so many other platforms exist. Then the first person says Steam is nearly a monopoly, and someone else argues that being “nearly a monopoly” means that you are, by definition, not yet a monopoly. They go back and forth and argue over regional laws and dictionary definitions, but the conversation never goes anywhere.

In the hopes of saving both of these people — and the rest of us — some aggravation, let me help you out. The word you’re looking for is hegemon. Steam is a market hegemon. It’s large enough that it can use its power to influence the industry in which it operates. It controls so much of the market that it can set prices and dictate terms, and other companies have relatively little bargaining power. Steam is not a monopoly, but it’s large enough that it has a lot of the powers that make monopolies scary and problematic. You can argue about whether or not you think that’s a cause for concern, but hopefully we can move on from debates over what makes something a monopoly.

The digital distribution formula is simple. The platform needs to make it easy to buy games, it needs to offer the user convenient access to those games, and it needs to keep them up to date. Sometimes a platform will have some bonus features, like voice chat or multiplayer matchmaking, but that’s the business in broad strokes. Over the years, a lot of companies have made their own clients and tried to face off against Steam, with varying degrees of success. Before we talk about the latest challenger, let’s look at the rest of the competition.

For a few years we had Impulse, which was run by Stardock. It wasn’t powerful or popular and the game selection wasn’t huge, but it worked, and it inherited a lot of goodwill from its developer. The service was bought by GameStop in 2011. For a moment it looked like GameStop had seen the writing on the wall and realized they needed a digital storefront if they wanted to stay competitive. Then they inexplicably closed the service in 2014. Imagine if Blockbuster bought a streaming service towards the end of their run, and then shut it down. Not only are they in a business that’s quickly going extinct, but they wasted their dwindling assets buying and subsequently dismantling something that could have given them a future. This is the corporate version of attempted suicide.

Microsoft had Games for Windows Live, a platform so bad I found it indistinguishable from a deliberate attack on the hobby. It was a background process that decided to update itself after you launched a game, deleted saves, and required a secondary login on top of Steam. That monstrosity is dead, although Microsoft seems to be trying again with the Windows 10 Store and getting similar results.

Probably the best of the non-Steam clients is GOG Galaxy. GOG is easily the most consumer-friendly of the bunch, with a solid anti-DRM stance and a generous return policy that’s less restrictive than Steam’s “Sale is final after two hours of gameplay” policy. The major drawback of GOG is that their catalog is mostly focused on old games. That’s a good market niche, but the lack of big modern titles mean that you’ll probably need to use one of the other platforms for your AAA needs. I don’t know if the lack of AAA titles is because GOG isn’t interested in that market, or if the major publishers don’t want to sell their goods on a platform with an anti-DRM stance. I’m genuinely curious about that.

Origin is the platform owned by EA. It was pretty terrible at launch, although it’s improved a great deal since then. Honestly, this platform would probably be in pretty good shape at this point if it wasn’t tainted by the toxic reputation of its parent company.

There’s also Uplay, but I’m hesitant to call that a platform. It’s more like an industry-wide prank. It has more in common with Games for Windows Live than with the other platforms. It’s attached to all Ubisoft PC games, even if you buy them on another service. Documenting all of the problems with Uplay would fill a whole column, but the short version is that it has almost nothing to offer the end user aside from hassles and the invasion of privacy.

The problem that all of these platforms face is that the network effect is working against them. Even if another platform has better prices and service, most people will stick with Steam because they already have a Steam account and their friends are already on the service. Because of this, publishers tend to prioritize Steam releases and ignore the rest. This makes Steam’s position even stronger. Even if someone tries an alternate service, they’ll be starting with an empty game library and an empty friends list. That increases the chance that they won’t engage with the software and they’ll continue to do all their shopping on Steam. Even if another service is objectively better, it will still have trouble attracting new users because of the pressure exerted by the network effect.

This creates an almost insurmountable hurdle for new platforms. They can’t get games because they don’t have users, and they can’t get users because they don’t have games. Some of the big platform holders like EA and Ubisoft are also games publishers, which means they don’t want to cooperate with each other by offering to sell their rivals’ games. This dooms them to having small libraries, which further strengthens Steam’s position. The second-tier platforms all compete with each other without really impacting Steam’s overwhelming market dominance.

How can anyone hope to enter the market at this point and compete with Steam?

As it turns out, the new challenger is Discord, the voice-chat platform.

Discord is not a games publisher, so it doesn’t have the corporate baggage of EA, Ubisoft, or Microsoft. It already has a massive user base of 150 million people, which is about the same number of Steam users. The Discord client is already mature software, so it won’t be launching with some bare-bones client and hoping to live long enough to add features. Discord has a rock-solid foundation of features for chat, streaming, and social integration.

Discord also managed to solve the “empty library” problem by having its client find all the games from competing clients and add them to the launcher. This means that when I fire up Discord, I can see all of my installed Steam, GOG, and Origin games in one place. Discord can’t install or update your Steam titles, but it can launch them. This is really handy if you’re hanging out with your friends in a Discord channel and working out what you want to play together. You can see all of your games without needing to jump between windows.

The other thing that Discord has going for it is a really snappy interface. If you’ve ever used Steam, you’ve probably noticed how oddly sluggish it can be at times. Steam’s interface is basically a web browser, so scrolling through your games is like jumping between pages. There’s a noticeable delay whenever you make a new selection. The Discord client has a great deal of interface polish and doesn’t feel like a standard Windows application. Where Steam might have a typical progress bar and a generic message like “Updating X,” Discord has a fun animated character and a collection of quasi-humorous messages to distract you for a second while the program is busy. It sounds like a trivial change, but the result is that Discord feels modern and responsive and makes Steam look like bland productivity software.

Discord is also promising a curated store, which means you’ll be able to find good games without needing to wade through a sea of half-finished garbage, asset flips, and other nonsense. I like that Steam gives us a platform where any kid with a dream can publish a game without needing to court the attention of a major corporation, but I’ll admit sometimes it would be nice if I could search for new titles without needing to sort through so much dross.

Does this mean Discord is about to dethrone Steam? Not even close. Not yet, anyway. Their library is still pretty small and their storefront is still missing some features. The games they do have are oddly focused on single-player, which seems strange for a platform dedicated to connecting players with each other. Their return policy is comparable to Steam’s, which isn’t particularly great.

Discord has a lot of work to do. It still has to fill its store with solid games and build the server infrastructure to support them. It takes time to build working relationships with developers and publishers, and we have yet to see if Discord has the support infrastructure to help people out when the system doesn’t work as expected.

I can’t say if Discord if going to succeed as a storefront for digital games, but this is a solid start.

Intellivision Amico Tries to Fill a Hole That No Longer Exists