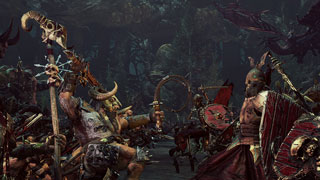 The next DLC for Total War: Warhammer hasn’t been announced yet, but a New trailer is showing off the Beastmen.

Creative Assembly hasn’t announced the next DLC for Total War: Warhammer, but a video posted to the official Total War YouTube channel may have let the cat out of the bag. Titled Call of the Beastmen, it shows off a new race that’s coming to the game.

Warhammer fans know of the Beastmen. The half-man, half-beast mutants are also known as “The Cloven Ones,” due to their cloven hooves. They also often have horns and other bestial traits. They live deep within the forests of the Old World, and their driving purpose is the destruction of mankind. As you’ll hear in the trailer below, “Gather Warherds. Hunt man filth. Kill man.”

The new DLC will add the Beastmen race to the Grand Campaign, as well as two new playable Legendary Lords. You can also expect a new story campaign titled “Eye for an Eye,” and what the official description calls “Hordes of New Unique Units, Monsters, Heroes, Magic and Game Features.”