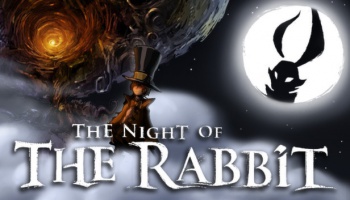 The Night of the Rabbit is a deceptive game. It looks white, fluffy, cute and harmless, but its eyes glow red and there’s an edge of desperation to its manner that hints at menace. There’s more than meets the eye in this magical land of talking squirrels, rabbits and mice, but uncovering its secrets is a wonderful and moving experience that you’re not likely to forget.

The Night of the Rabbit tells the tale of Jeremiah Hazelnut, a young boy and aspiring magician who has two whole days left in his summer vacation. While roaming through the woods near his home, he encounters the Marquis de Hoto, a gentlemanly, bidpedal rabbit who offers to tutor him in the ways of the Treewalkers – magician-travelers who use “portal trees” to move between a nearly infinite number of worlds – and to have him home in time for dinner. Enthralled, Jeremiah agrees to join him, and they embark upon an adventure to the magical realm of Mousewood and beyond.

Calling The Night of the Rabbit the best thing that the Teutonic adventuresmiths at Daedalic have ever done might be overselling it a tad, but it’s a very real possibility. It stands out from the crowd, and from Daedalic’s other games, in no small part because it’s so exceptionally well-balanced. There’s no sag in the middle, no tediously overlong segments to power through and not even much of what could be considered padding until the final act; it unfolds very slowly and yet steadily, which makes the payoff even more effective when it arrives.

Newcomers to the adventure genre will learn everything they need to know through a brief and surprisingly fun tutorial, and the point-and-click interface is smooth, simple and intuitive enough that the controls become effectively invisible within a few minutes of play. It looks great, as Daedalic games generally do, but the whimsical, hand-painted backgrounds and characters are particularly well-suited to this kind of fairytale adventure. The voice acting is also excellent, and the music quickly and easily flits from lilting to haunting and back as the scene requires.

The Night of the Rabbit boasts a hefty cast of characters, and the sharp writing and solid voice acting keeps them engaging and amusing. You’ll spend a lot of your time conversing with them and helping them out with various tasks – delivering mail, making a birthday cake, breathing life into an ancient, torpid goddess, that sort of thing – and although the journal appears vague and imprecise at first, failing as it does to track specific instructions and quest notes, it proves up to the task of keeping you headed in the right direction. Puzzles are generally straightforward but ramp up a bit in the second half, which puts more of a demand on your “adventure game logic” skills, and the Marquis’ offer of hints is generous but limited by his tendency to talk more about what you need to do rather than how to do it. 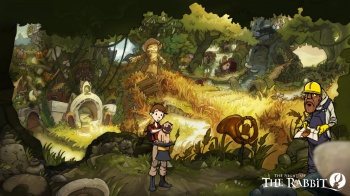 The adventure game experience is enhanced by a number of extras aimed at players who want to linger in its world. A built-in card game that can be played on-demand with most of the game’s characters – essentially a fantasy-adventure version of Go Fish – provides a simple but entertaining distraction from the labor of adventuring as well as an opportunity to collect some very attractive digital artworks for one of 16 Steam achievements. There are various hidden items to collect as well, including eight charming “Mousewood Stories” audiobooks that fill out the game’s fantasy, and while the challenge of finding it all may prove frustrating for tightly-wound completionists, the extra content is a pure bonus: an entertaining diversion for players who enjoy such things that takes nothing away from the game for those who opt to overlook it.

Night of the Rabbit’s biggest failing is that there’s simply too much of a good thing, and after awhile it stops being so good. There’s at least a dozen hours of playtime here and considerably more if you dedicate yourself to searching for hidden items and playing cards with the citizens of Mousewood, and at least the last hour of that time could have easily been shaved off. The final act will have you jumping through all sorts of low-content adventure game hoops, and a boss fight at the very end is both awkwardly executed and utterly unnecessary. It’s an unfortunate wrap-up to an otherwise perfectly-paced game.

But once you’re finally through it, the endgame is remarkable. A lengthy and wonderfully-illustrated series of cutscenes explains all that has happened and why, sets the table for any number of sequels and then finally ends with genuinely memorable finish. Much of it comes as a surprise because the message it appears set to deliver never materializes, but it’s powerful, moving and not entirely joyous; so many games just end, roll credits and exit to the main menu, but Night of the Rabbit really sends you off with something to think about.

It’s only May but Night of the Rabbit is easily a frontrunner for “Adventure of the Year” honors. It’s not perfect, but the magical world, memorable characters and haunting tale it serves up brings it tantalizingly close.

Bottom Line: If there was any question whether Daedalic is the inheritor of the LucasArts adventure gaming crown, consider it settled. The Night of the Rabbit is an outstanding example of the genre and an impressive next step in the ongoing evolution and refinement of its creator.