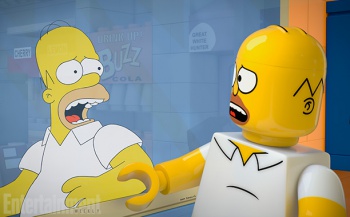 Homer Simpson will have to find his way out of a LEGO universe.

The Simpsons‘ 550th episode, titled “Brick Like Me,” will take place inside a LEGO universe. In development since 2012, the episode has been something Simpsons‘ executive producers Brian Kelley and Matt Selman have wanted to do for a long time.

Homer Simpson wakes up in a new world of different yellow characters and finds himself in a LEGO universe. In this universe, characters believe this world is where they belong. Through flashbacks, Homer realizes this universe isn’t a part of his normal life, and he must choose between the two worlds.

While having some headnods to the successful LEGO Movie, the Simpsons episode has no desire to be like the movie. Even the animation is quite different. “We consciously said: We’re not going to do rack focus stuff, where it’s blurry in the background and clear in the front,” Selman said. “Tricks like that worked so well in The LEGO Movie, but we felt they would not work as well for our universe.” Kelley added that everything is in focus in the show. Even so, the episode will be aware of the movie.

LEGO helped pay for the “Brick Like Me” episode and worked with Kelley and Selman, though the pair said all the words in the episode are theirs. When LEGO did have concerns about something, such as a LEGO sex scene, Kelley said they were able to find a way around it.