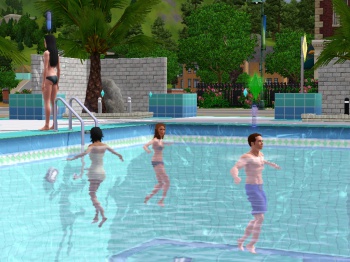 EA says that the scope of The Sims 4 means that the team had to shift its focus away from some features.

The Sims 4 won’t have pools or toddlers when it launches this September, and many fans were understandably curious as to why. EA initially gave a very general “its not possible,” response, but has now elaborated on just why features that had been with the series from the beginning were cut.

“The fact is, we owe you a clearer explanation for why pools and toddlers will not be in The Sims 4 at launch,” executive producer Rachel Franklin wrote in a new blog post.

“It begins with new technology and systems that we built for this new base game for The Sims – a new AI system, new animation system, new audio positioning tools, new locomotion logic, new routing intelligence and much more are all entirely new in this game.”

“So the bottom line is that when we sat down and looked at everything we wanted to do for this game, all the new tech we wanted to build into it, the fact was that there would be trade-offs, and these would disappoint some of our fans. Hard pill to swallow, believe me, but delivering on the vision set out for The Sims 4 required focus.”

So it basically boils down to it being too much work to add every single feature from the series into the game before it launches. Franklin added that the team chose to instead focus on other things, such as additional animations. Sims now have seven unique walk styles, Franklin revealed, 320 emotion-based animations and 600 reactions to objects.

He also added that pools and toddlers could be added in a post-launch patch or expansion, though the odds on it being free are somewhere between buckley’s and none.

If Pokemon Were Weapons