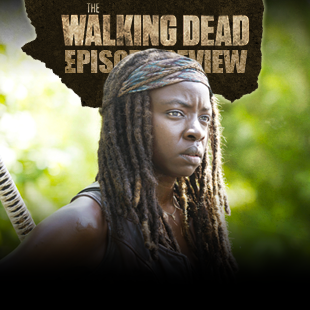 “What Happened and What’s Going On” takes The Walking Dead to very bleak places and revisits familiar faces.

Spoiler Warning: Scenes from the first half of the season and The Walking Dead comic book storylines are referenced below.

The Walking Dead Season 5 quickly established itself as the series best so far. It opened with an apocalyptic confrontation against armed cannibals, moved on to tightly-written character arcs, and capped 2014 with a staggering final twist that left everyone in tears. What’s more, Season 5 proved it was willing to move even farther from The Walking Dead‘s comic book roots with a complex storyline about corrupt police in the end times. The Walking Dead is finally the zombie outbreak show we’ve craved after that promising first episode, and I couldn’t be happier.

After “Coda” neatly wrapped everything up, one question remains – where will Rick and the survivors go from here? The directions are endless, especially now that writers are taking The Walking Dead to places the comics never explored. The only hint we have so far involves Morgan, who saved Rick’s life way back in Episode 1, and now follows the trail of carnage left in the survivor’s wake. Robert Kirkman himself also dropped a hint that remaining episodes will introduce “a prominent gay character” – which likely refers to Aaron from the comic series. If that’s the case, the TV show might finally be heading towards the Alexandria Safe-Zone and the most ambitious storylines from The Walking Dead‘s long history.

But in the short-term? The group needs to address their losses and immediate survival concerns, which “What Happened and What’s Going On” presents nicely. Saying anything more is digging into spoiler territory, so I’d suggest watching the episode on AMC or digital providers like iTunes or Amazon before continuing. 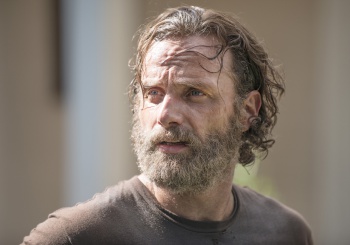 After last episode, our survivors are reunited but mourning Beth, who they spent most of Season 5 trying to find. What’s possibly worse is that everyone knows Eugene’s zombie cure really is just a myth – meaning there’s nothing of value the group can fight for beyond basic survival. With everyone rapidly approaching emotional collapse, one last hope remains: Noah’s family home. According to his descriptions, it’s part of a walled-off suburban neighborhood carrying 20 residents that might just make an ideal home base. Provided it hasn’t fallen apart in the year he’s been away.

“What Happened and What’s Going On” is all about keeping hope in a hopeless situation, and more importantly, whether doing so actually means anything. After the tumultuous events of the past two seasons, everyone’s spirits are so broken they already expect Noah’s hometown to be overrun – which of course it is. Meanwhile, Rick and Glenn have an ongoing conversation about whether shooting Dawn was the right decision – since she never wanted Beth to die – and whether that even matters. The general consensus: It doesn’t matter. It was going to happen no matter what Dawn’s intention was or who pulled the trigger. It’s an incredibly hamfisted way of saying “Wow, this zombie apocalypse sure is depressing” but it sets the episode’s tone well enough.

One of the few lone holdouts for optimism in this bleak world is Tyreese, continuing his arc as the survivor who doesn’t want anyone to die. To be fair, his philosophy hasn’t been working out lately – letting that one cannibal survive in the premiere probably killed Bob, while his plan to negotiate for Beth’s freedom backfired spectacularly. But even as Tyreese admits he’s trying to accept this world’s cruelty, he still wants to be the good guy. He comforts Noah in his grief and takes charge in investigating his home. It’s incredibly refreshing, and a stark contrast to everyone who wears pessimism on their sleeve.

And then some fucking walker shows up and bites him. Damn it.

So that’s it? Game over, man? Not quite. The Walking Dead TV show is unique in that you can survive a zombie bite, but you have to amputate the infected limb immediately. So the rest of the episode addresses the tension of Tyreese waiting for Michonne to arrive, chop off his arm, and (hopefully) save his life. Meanwhile, Tyreese’s fears take shape around him as fever visions of dead characters, each having lots to say about his current state.

The Walking Dead tried something like this in Season 3, when Rick got a “phone call” from his dead wife. It was a strange sequence that only existed because the comic book did it fairly well… before running it into the ground, anyway. The fever visions, however, are much better by comparison and bring back several deceased characters for one last hurrah. The Walking Dead is only going to get to do this once after all, and thankfully gets it perfect the first time.

We have friendly characters, like Bob and Beth. We have hostile enemies, like that cannibal and the Governor. Others, like Lizzie and Mika, are downright creepy considering why they aren’t in the show anymore. But all of them reflect Tyreese’s internal struggle very well, questioning the futility of his actions even as he fights to live. There are some genuine twists and turns leaving you never quite sure how the scene will end, all coming together for a surprisingly powerful conclusion.

Meanwhile, Michonne steps up to become the new voice of unexpected optimism for the survivors. It’s a little strange, coming from her, but she manages to pull it off even better than Tyreese did mere moments before. While Rick and Glenn wallow in their moral dilemmas, she pushes them into considering whether they really want to live in a world without hope, scavenging for supplies forever. Tyreese’s current predicament aside, that’s a welcome perspective for The Walking Dead – the show can’t just be about horrible things happening all the time, or it loses context and is far more painful to watch. Besides, all the terrible events of the past two seasons technically occurred in the span of maybe three months, a pretty short timeframe to assume hope is lost forever.

I suspect the thrust of Season 5 will follow the comics – where Rick and the group decide once and for all between hope and nihilistic survival. But that decision has no context without episodes like this – where hope is smashed to pieces against cold, hard reality – and “What Happened” pulls it off very well. And that’s without mentioning the episode’s many technical achievements, like wonderful makeup effects, effective foreshadowing, or treating zombie kills as an art form. Regardless, this is a powerful return to The Walking Dead and continues to prove this season is the best yet.

Bottom Line: The Walking Dead welcomes you back with open arms, just before tearing out your heart and eating it in front of you. But you’ll be riveted the entire time, and will want to return next week for more.

Recommendation: Run, don’t walk, to anywhere you can catch up on the latest episode.

Quiz: Do You Know Your Sci-Fi Clichés?