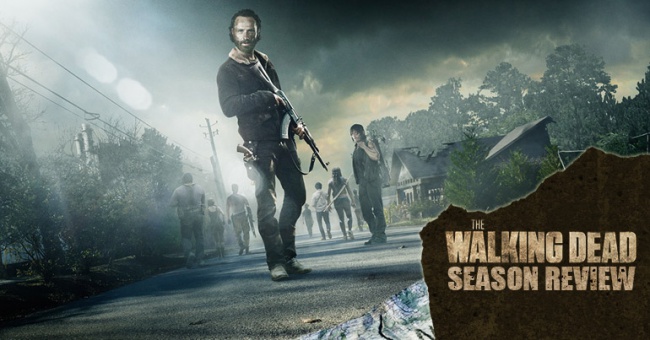 AMC’s The Walking Dead Season 5 is finally the zombie apocalypse show fans have dreamed of.

I’m as happy as the next zombie fan that AMC’s The Walking Dead exists. But if we’re being entirely honest, I think we can agree it’s been a bumpy ride. Oh, the first four seasons had some great moments, but they relied more on forced, one-dimensional conflicts than actual organic character development. Andrea sleeping with yet another charismatic villain? The Governor misleading allies for yet another prison attack? Nobody can hear zombies until they’re three feet behind you?

Season 5, on the other hand, is a giant wake-up call for what this show could be. As far as I’m concerned, the premiere was zombie apocalypse perfection without a single scene out of place. AMC followed that up with a fantastic original storyline about well-intentioned police officers who became kidnappers and fascists in the new world. Finally, we returned to Walking Dead‘s comic book roots with the Alexandria Safe-Zone, the one place that didn’t become a dystopian hellhole – something that threatens Rick’s worldview more than anything he’s faced so far.

Fair warning: From here the review will move into spoiler territory. If you haven’t watched The Walking Dead Season 5 so far, I’d recommend catching up with our past reviews or watching the episodes on AMC, iTunes, or Amazon. 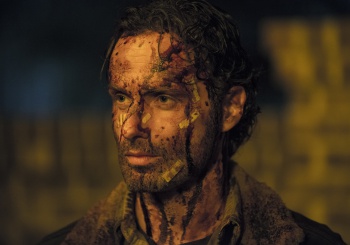 More than any previous storyline, The Walking Dead Season 5 showed us how much everything – and everyone – has changed. Rick went from being a well-meaning cop trying to keep his humanity to a hardened survivor who cares little for anyone outside of his new family. Carol remarkably transformed from a battered housewife to a post-apocalyptic badass – exactly the character that Andrea should have been. Meanwhile, Michonne changed from a distant loner to the most optimistic personality of the group – someone who realized she actually needs to be around human company.

And perhaps the best part of Season 5 was that it stopped relying on plot-required stupidity to advance the story. Rick, Daryl, Michonne, Glenn, and the entire crew are called survivors for a reason after all – because they survived what destroyed everyone else. Season 5 truly let these characters become badasses, and it was glorious. Studying your enemies instead of rushing in blindly? Check. Turning the tables on cannibal ambushes? Check. Clearing zombie-infested areas with tactical precision while watching your back? Check, check, check.

And that’s why the last-half of Season 5 – despite being slow-paced – is still incredibly powerful: Rick and his crew have to face that they might be the monsters. Seasons 1-4 usually let our heroes keep some shred of their humanity, but the Governor, Terminus, and Beth’s death carved all that away. Now the survivors are incredibly effective fighters, but are no longer suited to peaceful society – as represented by Aaron, Deanna, and the Alexandria Safe-Zone. These characters – Rick and Carol in particular – lived outside civilization for so long that they cannot accept Alexandria at face value. When Aaron approaches offering peace, Rick threatens to kill him. Upon entering the city, Carol steals weapons and traumatizes the child who spotted her.

The Walking Dead is finally offering deeper and more interesting conflicts than “post-apocalyptic gangs fight for resources”. Can people who survived horrific circumstances return to normal lives? Do they have anything to contribute to people who haven’t shared their experience? Does the new world really need Rick Grimes? 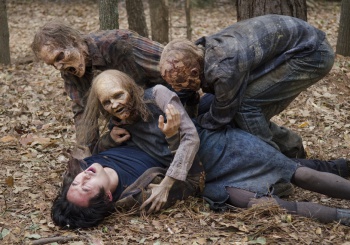 Now to be fair, the whole “We have become the monsters” trope is nothing new – especially when it comes to zombie apocalypse stories. But The Walking Dead Season 5 takes it a step further by suggesting even after the world ends, people aren’t black and white. Rick does horrific things over the course of the season, from executing unarmed prisoners to running over a rogue cop who threatens his plans – and for once he doesn’t pretend to feel bad about it. But he’s not a villain – he’s just been pushed to the breaking point in a world that’s done worse things to him and his family.

And Alexandria, for all its peaceful appearances, isn’t without flaws. Its people – especially its leader Deanna – live under an assumption that mercy and a refusal to kill makes them civilized. Sure that’s a perfectly noble intention – but it’s become so extreme that a host of sins are allowed to fester. The town surgeon beats his wife whenever he drinks, without fear of punishment. A scavenging team lies about their qualifications, and everyone they left behind to die. Deanna’s even uncomfortable with posting snipers to defend the community walls – the zombie apocalypse equivalent of locking your doors at night.

So what you have are two groups with opposing beliefs – both completely reasonable yet flawed in key areas – who are forced to work and live together. From a storytelling perspective that’s conflict gold, and we get to watch it unfold through every character’s unique perspective. Rick and Carol are effectively planning a coup from day one, telling themselves it’s for Alexandria’s own good. Michonne decides it’s time to hang up her sword, leading to a tragic outcome she never expected. Glenn has to decide whether to resolve a threat to Alexandria’s safety peacefully, or settle it the way his group would have outside. And without the threat of zombies looming over their heads, every character’s destructive tendencies become much more apparent – something you can’t just resolve with a city wall. 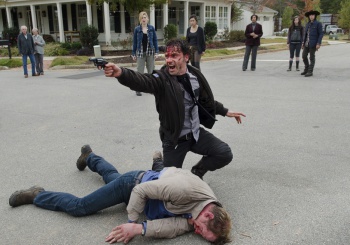 It all comes to a head when Rick loses control and pulls a stolen gun on Alexandria’s citizens, seemingly setting the stage for his exile or coup. Walking Dead finales usually present an explosive climax – be it a zombie horde, human gang, or that deathtrap CDC complex from Season 1. But that’s not quite what happens here. Sure, the threat of the mysterious “W” gang is finally revealed and there’s some fantastic zombie encounters – Aaron and Daryl’s in particular was one of the most nail-bitingly tense in the show’s history. But it’s the emotional climax that the show is more interested in: Seeing if Rick’s survivors truly can merge with Alexandria peacefully.

The answer is as complex as the question itself. Rick realizes he can’t solve every problem with a gun, Deanna realizes Alexandria is more vulnerable than she thought, and it looks like Walking Dead will finally have a “Let’s all get along” ending. But at the last moment, Rick and Carol realize something horrible will happen that can be prevented – and they do nothing just to prove their point. It’s the perfect end to this storyline before we move to the potentially explosive events of Season 6. It confirms that Rick’s survivors will get the changes they hoped for while highlighting how terrible they’ve become – even if becoming a monster in this world is necessary.

Bottom Line: The Walking Dead Season 5 is everything we’d hoped for AMC’s zombie show and more.

Recommendation: You’d have to be a zombie to not watch this show right now.

Game of Thrones‘ Maisie Williams to Guest Star on Doctor Who