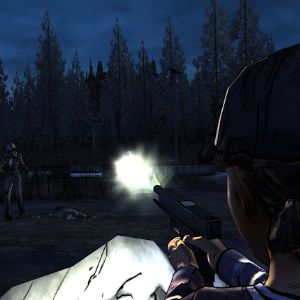 With the new season now firmly established, A House Divided provides a punchier episode, emphasizing intrigue and swift pacing over another depressing kick in the stomach. It’s a welcome break from the beautiful, but incredibly depressing, season premier, especially in its provision of a most welcome surprise partway through.

Episode Two also sets us up with something the series has, until now, lacked – a strong villainous presence. Naturally, I am none too inclined to reveal much due to spoiler fears, but the introduction of Carver – a man fearfully remarked upon in Episode One – makes his presence firmly felt, marking the arrival of a genuine antagonist besides the regular horde of rancid cannibals. It is too early to tell how the story will go from here, especially with a game so fond of pulling the rug from under its players, but the setup is very promising so far.

Setting things up is what A House Divided is here to do. Aside from one particular revelation, there aren’t any major memorable moments to take away from this one. It’s all well told stuff, narratively, but TellTale is using its time to build the foundation for later installments. It’s a wise move, withdrawing from the overbearing sadness that truly works best in measured doses. This is not to say things are boring this time around, but clearly the payoff for this one is going to be found later down the line.

A lot of tense conversations and a few action sequences make up Episode Two, with Clementine finding herself caught between two factions, as well dealing with conflicting loyalties. We get to know Clem’s new companions a little better, though there’s never enough time to see them develop the way such characters as Lily, Carley, or Omid were. Then again, given the events so far, a little alienation might be deliberate on the part of the writers.

Rather than hit the player with significant, nerve-wracking choices, Divided focuses more on smaller, subtler decisions. This is an episode with its feet deep in intrigue, and players will have to guide Clementine through potential treachery and displays of loyalty as she finds herself at the center of other peoples’ problems. As with much in this installment, these little moments are looking like they’ll have larger ramifications before the finale.

With all that in mind, this is not an episode you’ll be walking away from with a memorable reaction. Don’t expect to be stunned or shocked in any way, but do expect to enter the end credits excited about what’s coming. TellTale could very much do anything with the story it’s got set up for Episode Three, and I’m looking forward to seeing which direction it goes.

Bottom Line: An episode full of setup, A House Divided trades in its intensity for a bit more action, and a touch of intrigue.

Recommendation: It’s solid storytelling, and if you’re this far in, you’re going to want to continue.