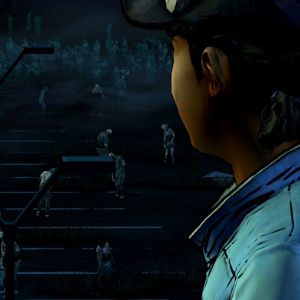 The Walking Dead‘s second season reaches its third episode with In Harm’s Way, as Clementine and her friends find themselves under the watchful eye of Carver. Without giving too much away – always the trouble with reviewing a game like this – Episode Three has Clem negotiating her way through a brutal society of survivors, choosing whether to be defiant or sycophantic while trying to escape the regime’s clutches.

If Episode Two scaled back the intensity, Episode Three brings a lot of it back. An excellent job has been done of showing just how dangerous – and truly vile – Carver and his men are, without turning them into gibbering, inhuman villains. You get a sense that the bad guys, or at least those pulling the strings, genuinely believe they’re in the right, and that any atrocity they might commit is being done for the benefit of everybody. The scariest villains believe themselves to be heroes, and if any videogame antagonist exemplifies that, it’s the principal player of In Harm’s Way.

Meanwhile, Clementine’s allies still struggle to connect with me as a player, mostly because it feels like we’re intruding on somebody else’s story. In truth, the current group’s issues with Carver are really between them, while Clementine was dragged into things by chance. Fortunately, the player gets to care about the situation a lot more once things become personal, to the point where they may feel compelled make a very macabre choice toward the end – but while this invests Clem in the narrative, it does little to promote much affinity between her and the new group.

When I talk of macabre choices, however, I can certainly say TellTale hit it out of the park with this episode’s darker moments. As Carver’s pragmatic sadism imposes itself on the protagonists, a sense of creeping dread is built gradually over the entire episode, and moments of brutality between the human characters are not shied away from in the least. One of our heroes in particular turns toward a very dark path indeed, and players may choose to bear witness to it. Should one do so, the results are beyond ugly, and the scene is directed to ghastly perfection.

In Harm’s Way is a particularly violent episode, given that the violence is predominantly human-on-human, with the Walkers making only a few obligatory appearances. As such, the real kicker is just how understated the savagery is in most instances. In this game, a beating is a beating – it’s not pretty, it’s not even very dramatic. It’s simply raw, and uncomfortable to watch, and it’s over with a frightening swiftness. Few forms of entertainment, videogames or otherwise, can capture just how disarmingly dirty real violence can be, but this is a moment where it’s captured with impressive effectiveness.

All this leads up to a particularly horrifying ending, one that keeps in theme with the rest of the episode and refuses to spare the details. No matter what you choose to do at the very end, the scene is set for Season Two to just get heavier, as characters begin to walk down a terrible path, and others deal with the harshest consequences for your actions.

Bottom Line: In Harm’s Way is one of the most violent installments TellTale’s overall series, if only for the disturbing intimacy of it all. At times, Episode 3 is hard to experience, but it’s well worth sticking it out.

Recommendation: Is this section necessary at this point? Three episodes in, you know which way you’re going by now.

The Affleck Batman And Batmobile Are Positively Miller-Esque