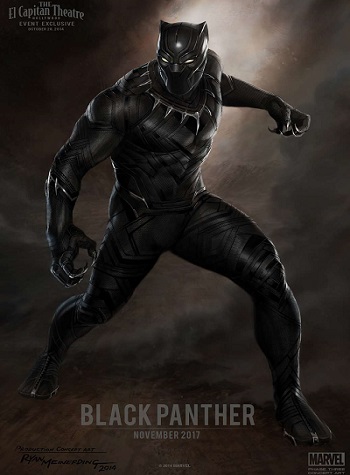 With the news that he’s getting his own movie, we look back on the lore and impact of the king of Wakanda.

Let’s get something out of the way: Marvel’s Black Panther isn’t named after the political party.

I mention this because over the last few days, I’ve seen dozens of tweets, from clueless people who don’t know how Google works, expressing a strange, bitter resentment that Marvel has announced Black Panther as part of its next wave of superhero films called Marvel Phase 3. Of course, the get-off-my-lawn brigade rarely bothers to do basic research, but it’s maddening to see reactions to something awesome being so cluelessly angry.

Related: Our looks at Captain Marvel and The Inhumans

Just so you know, the Black Panther party didn’t coin the name. That honor goes to the segregated 761st Tank Battalion, a highly decorated World War II outfit that, no joke, included Jackie Robinson among its members. Stan Lee and Jack Kirby probably did not have that unit in mind when they created Black Panther in 1966, but they did beat the Black Panther Party to the punch by three months. Marvel even temporarily changed Black Panther’s name to “Black Leopard”1 to avoid association with that group. So quit it with the lazy know-nothing complaints, old, out of touch cranks on the Internet.

Escapist readers, however, I know you’re cool. But I also know you might not have ever really had that much exposure to one of Marvel’s oldest supporting characters. That’s certainly about to change, now that Black Panther – complete with his incredible fetish-tastic catsuit – is set to become an integral part of the Marvel Cinematic Universe, but there’s no reason not to start now. So who is this guy? Let’s dig into it. 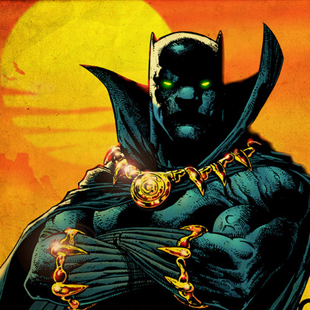 Who is Black Panther?

First appearing in 1966 on the pages of Fantastic Four issues 52 and 53, Black Panther, created (as discussed) by Jack Kirby and Stan Lee, marked the debut of black superheroes in mainstream comics. Further, while Black Panther is preceded by heroic characters created for All-Negro Comics, as well as earlier incarnations of Marvel, Black Panther also has the distinction of being the first black superhero with actual superpowers. (Falcon arrived in 1969, and Luke Cage in 1972.)

Obviously, the character owes a lot to the rapid social changes sweeping the country during the 1960s. Mainstream comics were a lily white affair until then, and even female superhero characters were largely relegated to supporting, almost infantilized roles2. While Black Panther wasn’t an expressly political character, Marvel was already notable for inserting relevant political themes into its comics, and Black Panther can’t be separated from that.

However, rather than tapping into Civil Rights anxieties (that was the X-Men’s job), Black Panther functioned in part as a well-meaning (if somewhat awkward) nod to the Afrocentrism movement. Instead of fighting for his own rights, he was their embodiment. Despite the unfortunate undertones – a mystical, secret prosperous land in the middle of a continent wracked by poverty and warfare, with some elements clearly derived from blatant exoticization of ethnic “others” – Black Panther was a very forward thinking concept that looked ahead to a world beyond the racial tensions of its day.

1) Incidentally, I think that was a weak move. The Black Panther Party never enjoyed anything remotely close to actual national influence, its brief 68-city presence in 1970 due largely to public reaction to FBI efforts to suppress it. After the bureau laid off, it basically collapsed. PS: I also think Archer is being weak for ditching ISIS.

2) True fact: Wonder Woman was initially admitted to The Justice Society as its secretary. No I am not remotely kidding. And don’t forget how Sue Storm was originally called “the Invisible Girl”. Yuck. 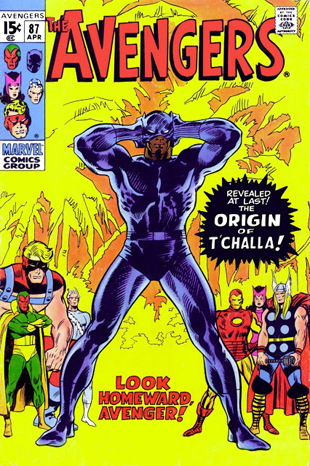 OK, but who is he in the Marvel universe?

Like most Marvel characters, Black Panther’s life is as convoluted and soap opera-ish as it gets, with a ton of connections to the larger Marvel universe filled in over the years.

The alter ego of T’Challa, charismatic and brilliant ruler of an advanced African nation called Wakanda, he is also the acknowledged head of all his nation’s tribes, which gives him the right to use the hereditary title “Black Panther.”

Wakanda is a resource-rich country somewhere in East Africa, notable for high concentrations of the fictional element vibranium, courtesy of a meteor impact sometime far in the past. Ancient leaders of the country correctly deduced that vibranium would be a highly sought-after substance, and to avoid exploitation, they worked to conceal the country’s existence. However, they enacted a policy of sending Wakandans into the world to learn everything they could, while at the same time meting out a tiny amount of vibranium in surreptitious trades. As a result of the subsequent intellectual and monetary wealth, Wakanda was able to develop in secret into the most advanced nation on Earth.

Because of its vibranium, Wakanda also has a high concentration of mutants. This possibly explains Black Panther’s enhanced senses, though his powers largely come from the Bruce Wayne school of superheroism. He’s trained to be in peak physical condition, and in addition to being backed by the wealth of his country, he’s also a genius. His trademark catsuit is made out of vibranium, by the way, which gives him an enormous degree of protection. (Imagine Captain America’s shield turned into clothing. More on that below.)

T’Challa’s father was killed by the supervillain Ulysses Klaw, who had found his way into Wakanda looking for vibranium to power a sound-based weapon. T’challa attacked Klaw and drove him from the country. He then embarked on a rite of passage during which he briefly dated a teenaged Storm, though that ended because he was dedicated to finding Klaw and avenging his father’s death.

After assuming the throne of Wakanda, he instituted numerous reforms, then went abroad for his education. His formal introduction into the Marvel universe occurred when he invited the Fantastic Four to Wakanda, then challenged and defeated them as part of a two-step plan to both prove his ability to defend the country and recruit the First Family in his battle against Klaw. (Like MovieBob says, Comics… Are… Weird…)

He was made a member of The Avengers in 1968, and soon after went public with his identity and with the existence of Wakanda. Since then he has alternated between stints as a solo hero and as a full-fledged member of the team. More recently, he married Storm, embarked on diplomatic missions including to The Inhumans, found himself in the middle between Captain America’s and Tony Stark’s ideological divide during the Civil War crossover, stepped down as ruler of Wakanda after a serious injury, for a while even replaced Daredevil, then annulled his marriage to Storm because reasons.

In between all of that, Black Panther got up to some weird and occasionally socially relevant adventures, such as a stint during the 70s fighting the Ku Klux Klan in the American south.

He’s been around, is the point. 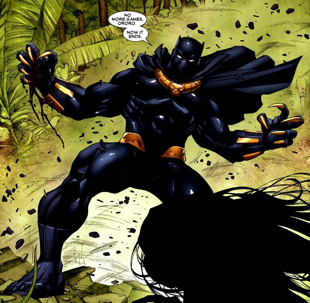 Why is this important?

First and foremost, the announcement of a Black Panther film is a concrete step in establishing greater diversity in the superhero genre onscreen. While there have obviously been black superheroes headlining films before, notably Blade and (in anti-hero form) the misguided and terrible Catwoman film, those films and others like them have been at best niche hits. More importantly, it has only been since the establishment of the Marvel cinematic universe1 that the superhero genre has emerged as a powerful pop cultural force taken seriously both by the public and critics. Having the main2 roster be exclusively white and male going on 6 years is a bit frustrating, and unreflective of both the culture at large and fandom.

Selecting the first black superhero as the first to have a stand-alone MCU franchise honors some pretty cool history and, hopefully, suggests Americans are finally becoming ready for nonwhite actors to be more than loyal supporting BFFs in our biggest pop cultural events.

That said, diversity for the sake of checking off boxes isn’t diversity at all, which is why it’s also notable that Black Panther is one of Marvel’s oldest and mythology-rich characters. Selecting him for a stand alone film isn’t just about an increasingly diverse Marvel universe, it also signals a commitment to an increasingly dense, interconnected one. Not only in the way that some of Black Panther’s world-building elements, like the vibranium used to make Captain America’s shield, enlarge the scale of the MCU. But also in how central, albeit in the background, Black Panther has been to some of Marvel’s biggest events and character arcs, particularly those now being exploited for Phase 3. At this point, going to the movies is starting to feel like collecting comics. And I have to say, that’s kind of awesome.

Finally, Black Panther has been a criminally underused character for a long time. Though Marvel, clearly anticipating this film, has used him more frequently in the last decade, he remains relatively obscure. A successful film might make people read more comics featuring him, and as you know, for those of us running this Escapist channel, more people reading more comics is a net positive.

Where do I start if I want to read more?

Since his introduction, Black Panther has been featured both in other characters’ series, and in several solo outings. I regret to inform you that there isn’t an easy-to-grasp list, in order, of where to start. Chalk it up to the convoluted mess that is 50 years of comics history. Thanks, Internet. Wikipedia has a list, but randomly glancing at my comic shelf, here are my suggestions:

1) Yes, I realize The Dark Knight is also partly responsible. However, that might be because it came out the same year as Iron Man. Largely, it’s the success of the MCU as a concept that legitimized comic movies as a genre. Batman was already (mostly) taken seriously; The Dark Knight just legitimized Christopher Nolan as a blockbuster filmmaker. Feel free to disagree in comments, however!