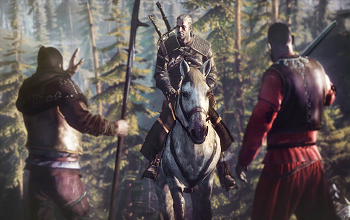 There will be no Bioware-esque “puppet thrusting” in The Witcher 3.

Update: The Witcher 3 developer Nikolas Kolm has clarified the whole “16 hours of mo-cap data” statement, explaining that “It took 16 hours to record all mo-cap material for the sex parts. This does not translate to 16 hours of sex in game.”

Original Story: Sex in video games, due mostly to media scaremongering, is usually a pretty taboo subject, especially for developers based in America. But for Polish developer CD Projekt Red and it’s ambitious RPG The Witcher 3, it’s no problem. In fact, sex is a very important part of the game, Senior Game Designer Damien Monhier explains, telling us that over 16 hours of motion-captured data was used to make up the sex scenes that takes place in the game.

The Witcher 3‘s opening scene utilizes one of these sex scenes right off the bat, showing that our hero, Geralt, had just been intimate with the elusive Yennefer.”People might think we’re putting sex into the opening scene for no good reason,” explains Monhier. “No, no, no. We are establishing that your character was intimate with this woman recently in order to plant in your mind that, at very least, he must enjoy her company.”

“Sex is the quickest way in which to establish the relationship and provide a justification for the player to pursue this woman,” he continues. “We couldn’t just tell you to go find someone you don’t know or care about. It wouldn’t work.”

The Witcher is a dark fantasy take on the world, and the sex that takes place in it is an essential part of it. It makes it feel real. You may remember a scene in The Witcher 2, where, Geralt trips over while hurrying to remove one of his boots as he follows a naked lover into a pool. These kind of human interactions are what CD Projekt Red are aiming for with their utilization of motion-capped data.

Hopefully, The Witcher 3 is able to move past those incredibly awkward “puppet-thrusting” sex scenes we’ve seen in Bioware’s titles, and give us something a lot more realistic.

Valve Has Paid Out $50 Million to Community Content Creators