Everything that makes Super Mario Bros. 3 truly special is exemplified, for me, by a single image: A chain chomp breaking free of his bonds and bouncing off the screen. 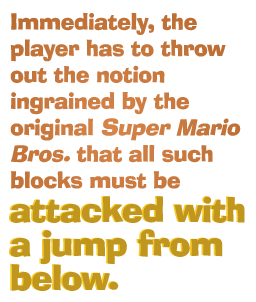 You’d be forgiven if you didn’t know that chain chomps – the toothy, black, ball-on-a-chain cum guard dogs that first appear in level 2-5 – could actually break free from their eponymous chains. A chomp has to lunge a full 47 times for its silver chain to start flashing a distressing red, and three more lunges for the chomp to finally break free and bounce towards Mario. The entire process takes about 175 ticks of the in-game timer, depending on how much Mario goads the chomp. That’s easily seven times as long as even the slowest of players usually takes to jump past those snapping teeth and on to the next challenge, without a second thought for the poor, imprisoned enemy they’re leaving behind.

On first glance, this hidden extra seems like a relatively meaningless addition to the game, the kind of pointless Easter egg a bored programmer might have thrown together during a coffee break without anybody else noticing. But taken in the context of the game as a whole, that chain chomp’s potential for freedom is emblematic of the way Super Mario Bros. 3 subverts players’ expectations to make a game that feels truly magical.

It starts in the very first level, with an item block that’s stubbornly attached to the ground. Immediately, the player has to throw out the notion ingrained by the original Super Mario Bros. that all such blocks must be attacked with a jump from below. Then there’s that familiar diagonal line of coins over the game’s first major gap, inviting the player up into the sky, practically begging them to figure out how to fly higher than they’ve ever been able to go, unassisted, in previous Mario games.

The game hints at this potential with another seemingly meaningless touch – the way Mario sticks his arms out, like a child pretending to be an airplane, when he’s achieved liftoff speed. Even without a raccoon tail equipped, Mario’s jumping animation is slightly different when he leaves the ground at this speed, his feet coming to a graceful V behind him, his body rounded to achieve maximum aerodynamics.

It’s important to note here how rare such animated touches were at the time Super Mario Bros. 3 came out. Due to a combination of limited digital storage space, tight project deadlines, and the difficulty of evoking detail with small, pixelated sprites, most early NES games had decidedly limited character animation. The average platform game character of the day was lucky to have three distinct frames of running animation, one of which might have been reused as a jumping pose. Mario’s few frames of extra animation somehow made him seem more real, more alive than other videogame characters of the day. Mario’s animation in Super Mario Bros. 3 has been touched up in a number of other subtle ways. When powered by an invincibility-granting Starman, for instance, Mario adds a tight mid-air somersault to his jump. When launching into the air after a steep downhill slide, he flutters his legs in a sign that he’s uncharacteristically not really in control of his own momentum. 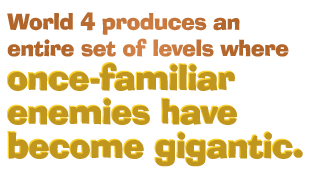 The game’s wide variety of enemies, too, seem to go out of their way to constantly show they’re more than virtual automatons. It starts in the first moments of World 2, when a leaping micro-Goomba first camouflages itself in a seemingly routine stack of blocks. It continues later in World 2 when an angry-looking sun spends half the level masquerading as a harmless decoration, only to swirl and swoop menacingly down in a dive bomb attack. And it lasts until the very end of the game, when a set of harmless-looking statues in the game’s final level spit lasers at Mario with a sound effect that still startles me to this day.

Super Mario Bros. 3 is full of enemies that have evolved from their similar forms in the original Super Mario Bros., from fire-spitting piranha plants to Hammer Bros. that now throw boomerangs to the fearsome Big Bertha, an over-sized fish that can swallow Mario whole, power-ups and all.

But some enemies even show evolution within the game itself. Take the mother-and-children groupings of squid-like bloopers, which travel in straight, zig-zagging patterns for much of the game, before suddenly exploding in a starburst attack in World 6. The familiar Bullet Bills evolve into Missile Bills late in the game, with the added ability to turn in mid-air and hone in on Mario. And of course World 4 produces an entire set of levels where once-familiar enemies have become gigantic (though Big Bertha has, hilariously, been replaced by a relatively harmless Cheep-Cheep in level 4-2).

Again, it’s important to remember how rare this kind of enemy variety was in the context of the games of the time, which had limited storage space to waste on countless enemies with unique attack patterns. Even Super Mario Bros. 3 is guilty of this, throwing in perhaps too many Goombas and Koopa Troopas than are strictly necessary in some parts. But the slight variations on the familiar forms made the game world feel like a truly diverse ecosystem, one where spotting the rare, fire-spitting Nipper plant in World 7 could make you feel like the star bird-watcher at the Audubon Society. 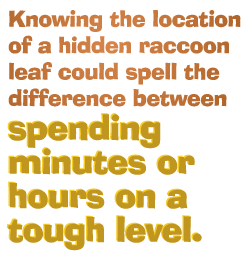 Remember, too, that Super Mario Bros. 3 came along well before games were suddenly all-but-required to include a save feature. The limited lives and the prospect of starting over from the beginning of a world made each power up and coin-filled secret area in the game all the more worthwhile.

Exploring each level with a fine-tooth comb wasn’t just a matter of wandering through a high gloss virtual movie set, as with so many of today’s games. Exploration was a survival strategy – a way to build up an edge for the punishingly tough levels you knew were coming. Even if you used the common trick of bouncing on Goombas endlessly to get 99 lives in level 1-2 (and really, who didn’t?), knowing the location of a hidden raccoon leaf could spell the difference between spending minutes or hours on a tough level.

That basic difficulty would invariably fade with countless playthroughs and developing reflexes, of course. But there was something about the world of Super Mario Bros. 3 that drew you back in long after you’re able to speed through all 90 levels in a couple of hours (or use warp whistles to polish off the game during a shortened lunch break). Even if you’re good enough to dash through the game like that, chances are you won’t play the game like that exclusively. That’s because just running to the end of the level means failing to appreciate so many little touches that make the game special.

Rushing through means forgoing the opportunity to lounge around in the coin-filled floating oasis hidden atop level 2-4. It means not stopping to swim in the floating waterfalls of World 4, or appreciating the random Cheep-Cheep that bounces between icy puddles in World 6. It means not spending a half hour and dozens of lives trying to collect 78 coins in level 6-7 to get that white mushroom house with the near-worthless anchor (an meta-goal that predated the Xbox 360’s Achievement system by at least 15 years). 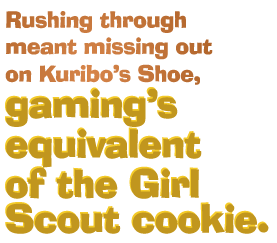 Rushing through meant missing out on Kuribo’s Shoe, gaming’s equivalent of the Girl Scout cookie. Found exclusively in level 5-3, the Shoe is a tasty treat, but its abilities are relatively plain. The frog suit provides the same high jumping and awkward forward movement, after all, while a fire flower can just as easily dispose of those Spinies and Piranha plants that Kuribo’s-shoe-equipped players just can’t seem to get enough of jumping on.

But, like Girl Scout cookies, we revel in the experience of the shoe because we don’t know when we’re going to get to experience its uniqueness again. Just getting to level 5-3, even with warp whistles, is a process that takes ten minutes or so for most Super Mario Bros. 3 players, and once the level’s complete you can’t climb in that shoe without starting the entire world over. Later, save-file-equipped re-releases might change that equation, but the sheer ephemeral nature of each level in the original Super Mario Bros. 3 made it an experience you wanted to savor before it was gone for good.

Which brings us back to that escaping chain chomp. The more I think about it, the more I think that broken chain was a part of a conscious effort by the developers to pack the title with as many unexpected, memorable moments as possible. I think of it as part of a pattern of design decisions intended to impart to the player that nothing in Super Mario Bros. 3 is necessarily what it seems. Here is a world where what’s coming around the next corner might not be like what was around the last one, but it’ll definitely be worth seeing.

To me, that broken chain represents the Mario team breaking free of the genre conventions they themselves had created, and pledging to ensure a Mario player can take nothing for granted.

[byline]Kyle Orland is a freelance journalist with over ten years of experience writing about games and the issues surrounding them. He’s giving even odds that Kuribo’s Shoe will be in the upcoming 3DS Mario game.[/byline]