Check out our other Heroes of the Storm guides!

If there is one mistake made by players of Heroes of the Storm – or just about any other game, really – that is the single greatest contributor to losing, this is it. This mistake is made by just about every player in just about every game, and by avoiding this behavior, your win rates will skyrocket. Few people intentionally make this mistake, and avoiding it isn’t always easy, but it really is the simplest of things you can work on to significantly improve your play.

So what is this magical mistake responsible for just about every lost game?

Stay with me here – I know this isn’t exactly a shocking revelation. Everyone knows dying is bad, but based on what I commonly see in games, it seems many new players don’t quite understand that dying is actually one of the worst things you can possibly do in the game. Let’s go over why that is, and how you can avoid dying unnecessarily.

And that’s fine! We become better players by learning from our mistakes – but we must own up to those mistakes. If the first thing you do when you die is blame your team mates, then you are not adopting a mentality that will help you improve at this game. Every time you die, while waiting to respawn, take a moment and ask yourself – why did I die?

Was I out of position? Did I overextend? Did I pick an unfavorable engagement? Most of the time, you’ll find some mistake that you made that you could avoid repeating in the future.

Why is dying so detrimental

When you die, you are feeding the enemy team XP. This will help them get a level lead on you, and while one death won’t make a huge difference, feeding multiple kills will add up to a level advantage. You unlock talents at levels 4, 7, 10, 13, 16, and 20, and when an enemy team gets a new talent before yours, that’s a big advantage, with the biggest being the talent received at level 10 – the Ultimate. There is no greater level difference than between 9 and 10. Feeding the enemy team XP puts your team at a disadvantage.

A second reason why dying is bad: when you’re dead, you’re not helping your team. You are out of the game. Now there is a burden on your team to have to cover for your absence. If this happens in the laning phase of the game – the 1 to 10 journey – and you were the only person in your lane, then the rest of your team will have to rotate someone down to fill your lane while you’re gone. If there is no one in that lane to get the XP when minions die, then your team will continue falling behind in XP on top of the XP you’ve already fed the enemy by dying. Not only that, but your team now has one fewer member to help get camps, bosses, and map objectives. Even if the respawn timer is fairly short due to it being early in the game, you must still factor in the travel time. The most precious resource in this game is time. Time is what allows a team that is behind to catch up. Every second not spent doing something productive for the team is a wasted resource. 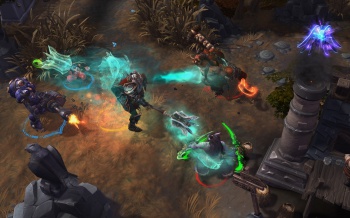 Third reason: if your death results in the enemy team having a numerical advantage over your team – eg. it’s now four blue vs. five red – then you’ve basically ensured that your team cannot win any team fights and has to play defensively. More often than not, it is a bad idea to engage the enemy when you’re outnumbered. So by removing yourself from the game, you’re limiting what your team is able to do. By the same token, the enemy team will recognize their numerical advantage and try to press the attack. You’re giving them the opportunity to play more aggressively to try to force a team fight.

Should I trade kills?

If you’re playing as Murky, dying isn’t as bad. Murky respawns very quickly thanks to his egg, and his death only feeds the enemy team one fourth of a kill. If you can “trade” with Murky – by which I mean you die in order to kill an enemy – then that’s actually a really good trade. In general, trading is a bad idea. If you sacrifice yourself to kill one enemy team member, then there better be a good reason for that. The only way that is a good trade is if that enemy is more valuable than you, and you will very seldomly find yourself in a situation in which that is the case. Most of the time, if you die to kill an enemy, there is no net gain or loss for either team.

Fighting to the death – don’t do it

If you see your team mates dying, don’t go die with them. It may seem honorable, but if you want to win, don’t jump into a fight that your team has already lost. Don’t keep fighting until your whole team is dead.

There are some circumstances in which dying isn’t as bad as it normally is, or when it’s okay to sacrifice yourself. For instance, Diablo and Leoric have powers that let them return to the fight quicker than most heroes, and while that diminishes the impact of their deaths, that doesn’t give you carte blanche to play recklessly and allow yourself to die. That said, if there is one person on a team who will sacrifice himself, that tends to be the warrior. It’s not that he’s intentionally killing himself; warriors just usually have the best kit to survive – to be the last man standing and hold off the enemy until the rest of his team can escape. The warrior is prepared to die to save his team, but he is still trying to get out of the fight alive as well.

If you see a fight going poorly for your team, and the warrior starts pinging retreat, then please – retreat. Even if you see him still skirting around, or maybe he falls back a bit and then re-engages, that isn’t a signal for you to re-engage with him. He’s saying, “Get the hell out of here! I’m holding them off until you can get to safety!” Warriors have tons of health, crowd control, escapes… The warrior is trying to save your team – let him do it. Don’t let him die in vain.

In a similar manner, if a battle is going poorly, and your team mates are starting to fall back, and maybe you’re a squishy assassin that was left in the fight, you’ve taken a lot of damage, and you see the support of your team return and heal you or put a shield on you… that is not a signal for “dive back into the fight!” That support is returning to offer what he can to help you get away with your life. Don’t throw that life away – not unless you’ll make a great trade.

Good players only risk dying when there is something worth risking their life for. So often, the beginning of a game that features a central watchtower sees the first 50 seconds consumed by teamfighting uselessly over that watchtower. Yes, vision in this game is important, but you can take back a watchtower 30 seconds later without incident. Having vision in the first minute of the game isn’t worth fighting over. There’s little information that you’ll glean that early on that will help your team win. What’s more important is to lane – to not miss out on any laning XP. It’s fine to go for the watchtower; it’s not fine to trade repeated deaths for almost a minute while minions are dying in other lanes with no one on your team there to soak.

Similarly, with objectives – yes objective are important, but that doesn’t mean you have to kill yourself over them when you’re outnumbered or outmatched. The #1 rule about picking engagements is: Don’t pick unfavorable engagements. This rule doesn’t get thrown out the window over objectives. If your’e playing Cursed Hollow and you see three enemies at the tribute, and you’re alone, don’t go in there. Maybe your thought process is, “I’ll stall them.” Sure, maybe you’ll stall them – and then you’ll be out of the game for a longer period of time than you delayed them. Your team can’t keep feeding in people one at a time, dying in order to stall – it takes a few seconds to get the tribute, and it takes much longer than that to respawn and march back over to the tribute.

Along the same lines, if your team is level 9 and the enemy is level 10, you cannot contest an objective. Don’t even bother trying. They will be able to use their Ultimates, and you won’t. Your time is better spent trying to get to level 10 as quickly as possible so that you can be on equal footing for team fights. The only way you can win a team fight when the enemy has Ultimates and you don’t is if they screw up massively – and any plan that relies on the enemy being incompetent is a bad plan.

Let’s reiterate – it’s okay to die, as long as you make it a learning experience. If you see that you’re the person on your team that has the most deaths, try to play less aggressively. If you’re new to a hero, you’ll get accustomed to how easily that hero dies and what the right balance of aggressive versus careful behavior is. It’s about learning when it’s safe to be aggressive.