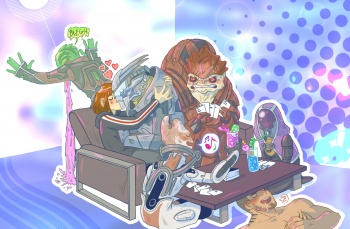 Of course the URL for the deal is “totallyfuckablealiens.com”.

You can buy them here for just one dollar. You’ll notice that the URL for the special deal is “totallyfuckablealiens.com” – which should give you a bit of a hint as to what the cards themselves will contain.

Still confused about this incredibly simple promotion? Here’s an F.A.Q from the CAH team:

Q: Should I buy this if I’ve never played the Mass Effect series?
A: Probably not.

Q:Does this have Andromeda spoilers?
A: No, they wouldn’t let us play it.

Q:Is this a limited run?
A: We’ll sell these until we run out. Together we can stop Sovereign!

Q:Can I cancel my order?
A: We don’t have to submit to the Reapers. We can beat them! You can’t cancel your order.

Q:I want to complain about the ending of Mass Effect 3.
A: Still? Okay, email [email protected].